The shortest day of the year & quite a pleasant one until light rain came in at about 14.45hrs.
Just 17 volunteers signed in today; 17 avoiding Christmas preparations.

Bob W, Tony & John S were the building team for face work & Peter Q was on his own with internal block work. 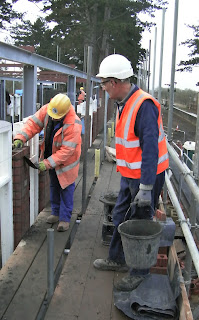 Tony filling in between windows & Keith S has just delivered another bucket of mortar. 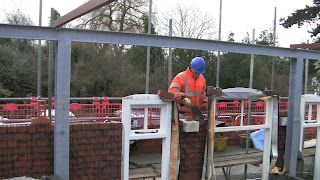 John S is filling in the gap between door and window frames on the station drive side while at the same time building in a corbel which will help to support the canopy over the booking hall entrance, the other corbel can just be seen behind the right hand stanchion. 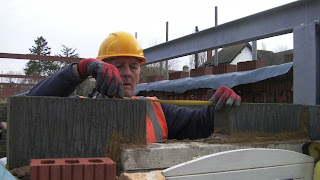 Peter Q is seen measuring up to fill the gap over a window lintel. 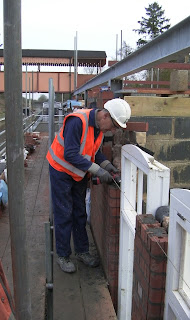 Keith S is attaching a window frame tie, which will be secured by the next course of bricks, laid by Bob W.

A delivery of roof panels, for the station building, was received early in the day & many hands set to with the unloading & storage. 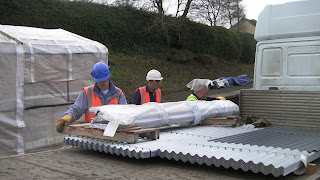 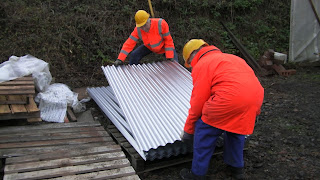 John C on Bobcat & Rod on dumper were involved in removing a large quantity of soil in preparation for a wider entrance to the station drive. 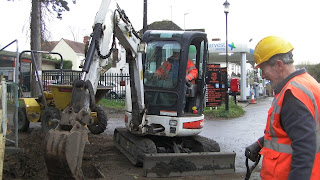 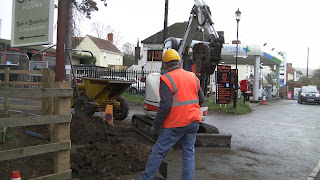 Stevie W arrived early afternoon with the JCB to assist in moving our cement hut. This will allow better access for excavating an area of platform 1 where a concrete base is needed for the bridge stairs supporting pier (a bit of a mouth full!) 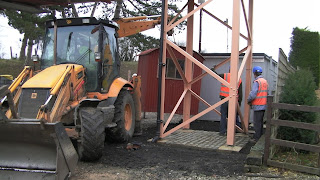 Dave B, Terry, Pat & Martin spent the day on the arduous task of erecting palisade fencing with gate, roadside on the Evesham side of the railway bridge. I wasn't present at the end of the day's proceedings but I believe they had just one panel to erect to complete. 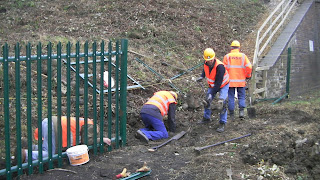 Jon C assisted from time to time helping to set posts to their correct height before they were set in postcrete. Here we see the second gate post being dealt with.

Well that's all for this week. A small team are planning to work next Wednesday 28th December.

It just remains for me to wish, on behalf of my fellow Broadway Volunteers, a Merry Christmas & Happy New Year to all our Blog Followers.
Paul C
Posted by BAGBLOG at 13:37