A Balmy Day at Broadway 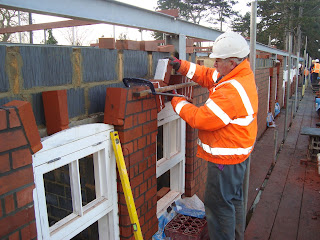 What a difference a week makes; 26 volunteers enjoyed a sunny and warm, for the time of the year, day. Saturday was a non working day as the group enjoyed our annual Christmas Lunch, a good day was had by all. Thanks to our hosts, The Broadway Hotel and Lynda and John S for organising the lunch and raffle.
The weather today allowed the bricklayers to crack on. John C in the process of forming a window arch, a painstaking operation but the result well worth the effort. 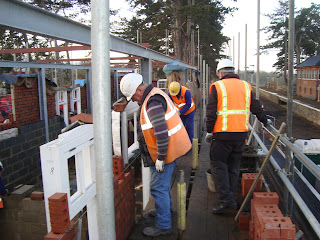 Further down the platform side of the building Bob W is raising the wall between the windows, while Tony is working on the central part of the building. Paul has just delivered more mortar. 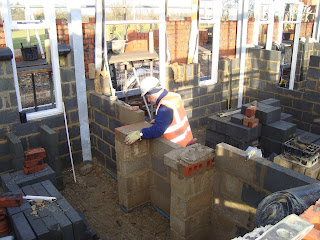 Looking down inside Clive is laying more blocks, this time on what will be the real chimney breast. 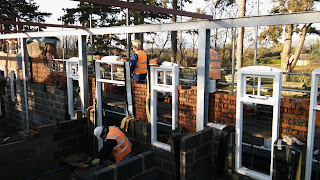 A picture from the other side shows Clive in the Booking Hall and where Tony and Bob are filling in the facing bricks between the windows. 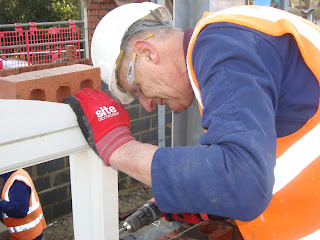 Keith S concentrating on attaching the ties to the window frames that will secure them to the brickwork. 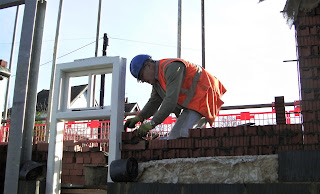 John S also bringing up the wall in the central area but on the station forecourt side. 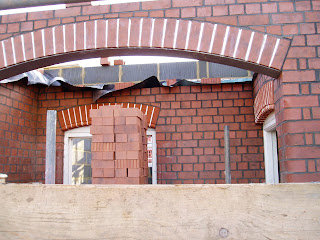 I'll finish on the station building with two detail pictures. This one showing three of the arches completed by John C in the toilet vestibule. The main entrance arch with two of the doorways into the Ladies and Disabled toilets. 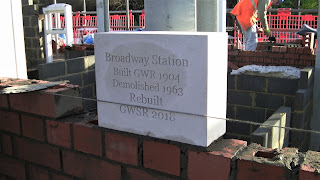 It was also time to set the plaque to commemerate the re-building of the staion.
It reads,  Broadway Station, Built GWR 1904,
Demolished 1963, Rebuilt GWSR 2018.

Some of the other work today included our painting team, here Mike is doing some snagging on the signalbox steps while Graham starts on the detail work on the lampposts and gate posts. 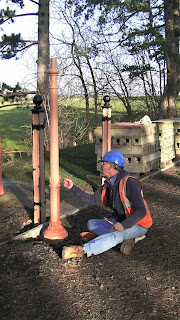 Who would have thought, painting outside, sat on the floor, in the sun in mid December. Graham working on the detail on one of the lamp posts. 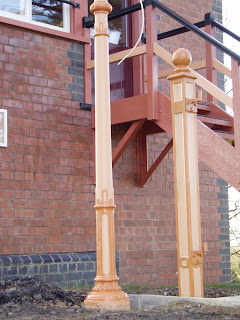 This picture shows the detail on a lamp post and gate post. With the spear fence erected and the lantern on the post it will look great. 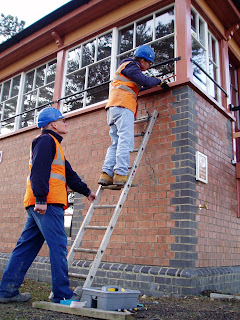 Another job on the signalbox was the fitting of some small drainage tubes into the sliding window channels, to stop water collecting in the bottom. 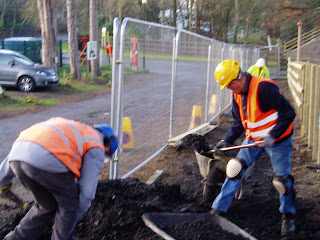 Down on the station drive work continued on the wooden fencing. First thing though we were all shovelling old ballast, about five ton of it. This was to make up the ground a little and make the conditions underfoot better for the fencers. Terry and Dave are barrowing ballast down to Vic in the background who is levelling it out. 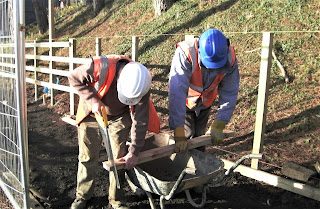 Later on Vic and David returned to the fitting of the horizontal rails. 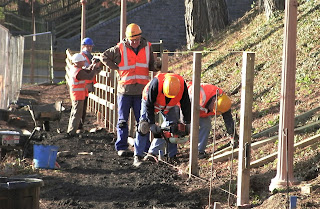 Further up the drive Terry on the augur whilst Pat and Rod wait to erect the next post. These are the intermediate posts. The main posts are 3.6 mtrs apart with two intermediates spaced between them. 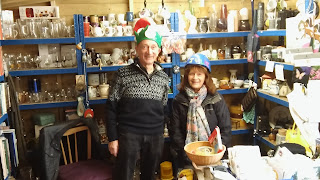 As always other work was going on, Brian M was cutting even more bricks. Dave B and Martin were making a start on a pallisade fence which will run from the bridge abutment to our boundary on the Evesham side of the main road.

Here Julie and Steve getting the shop ready for the Christmas sale.