The cold and wet start to the day may have deterred the number of volunteers that turned out at Broadway today. But 21 did attend and kept themselves busy throughout the day with plenty of the ongoing jobs around the site.

A lot of activity was as usual around the station building, below Tony and Bob anchor one of the windows to the brick work as the brick levels gains height on the south gable end of the station. 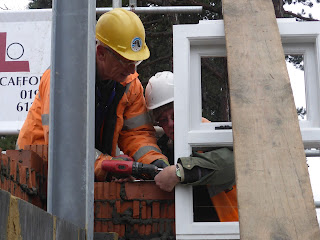 All windows have now been installed in the station walls and from the viewing platform this is now the view of the building. 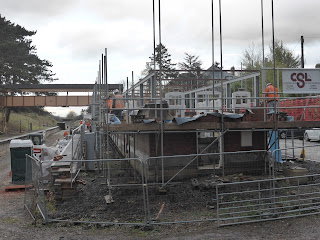 Elsewhere, on the car park side, John S continues the brick laying where the kitchen and cafe will be. The previous weeks installation of the ceiling joists required additional block work  to be installed on the north wall to bring it level with the outside wall . 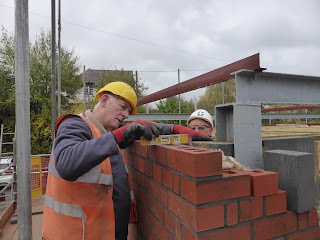 The ever adaptable Peter Q (now a blocklayer!) and Keith, the cement mixer and deliverer for the day, are seen checking all is well with the levels. With gents toilet complete Peter later moved indoors to carry on blocklaying in the cafe area. 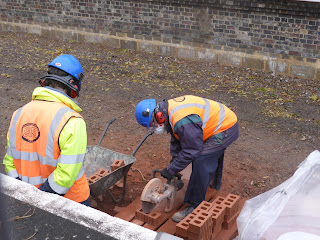 Brian kept up the task of cutting the bricks in half , whilst Dave waited patiently for another barrow load which was then delivered to the waiting bricklayers on the station building.


Dave H continued on the construction of the shuttering boxes for Platform 2, by the end of the day box 1 had been finished and duly modified to allow it to be dismantled a lot easier when stuck in a hole, and the 2nd box has now two completed end pieces and the long frames are ready for the installation of plywood to complete the side.


Back on the station drive

Work continued with the installation of the drive way lamps, John C and Dave B are installing the ducting and draw string for lamp number three while away from the photo Graham is on mixer duties. Lamp number three in place John went off to collect number four. 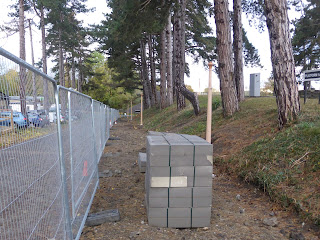 Above are the completed line of lamps with only one more to be installed on this side at a later date, in front are the piles of kerb stones and edging awaiting installation.

When the kerbing is installed outside the station building we would like it to match the granite kerbs that were there originally, these were 12 ins x 6 ins and around 4 to 6 feet long, as in the photo. 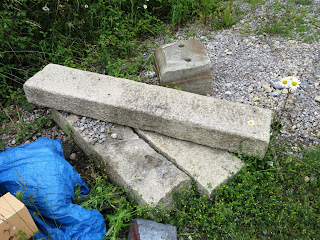 We have these plus a few others but really need more, if you know where we can obtain some please let us know. We are aware of those on Ebay.

Last week I had mentioned that we were looking for a volunteer to put the signal box gate post in, here was just the man (with the help of Peter K) . 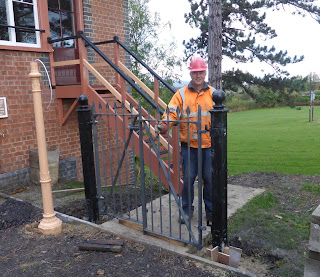 Jo and Peter having erected and concreted in the right hand post, Jo then decided to have a trial fit of the whole gate, (just to check levels). Spear fencing will at a later date be installed to match the gates on either side of the posts.

And finally to the title of the blog, after many months the installation of the fencing above the east cutting draws to a close. Today the team led by Rod and Terry with Vic, Pat and Steve pushed towards the end. The right hand picture shows Terry filling the last hole whilst Pat holds it vertically , Vic`s fence in the distance shows the finishing line.


All that is remaining to do now is fix the palisades on the last three panels and the jobs a good 'un . 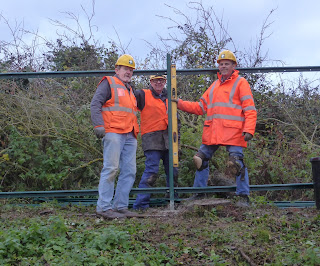 Posted by David Holdsworth at 11:00