The day had started cold and bright, but by lunch time it had changed back to the usual cold and damp. A lunchtime shower kept a few in the mess hut a bit longer than usual but a majority of the 26 volunteers who attended today just wanted to get on with the ongoing tasks.

Last Saturday saw the remaining palisades fitted to the fencing on the east side (Cotswold side). 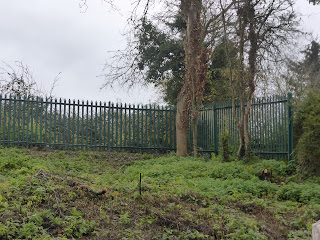 When one fence ends another one is started, this time at the bottom of the driveway! 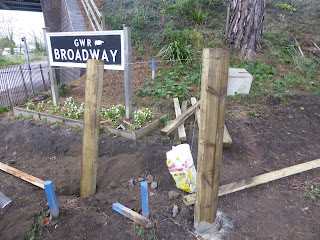 This was the first of the three wooden posts that Rod, Terry and Pat installed at the bottom of the drive. The fence line had earlier been traced out by Gordon and Dave B, and will follow the line of the lamps towards the station building.

With our mini digger John C out of action (get well soon John), it was back to the old method of manhandling.

Three lamps were due to be installed opposite the station building. Firstly a number of bodies were needed to lift the lamps onto the dumper. Normally carried out by one man and a mini digger!


Then looking like an intimation tank off "Dad's Army" it was driven by Rod to the station car park where the holes had had to be dug by hand by Graham, Steve and Mike. Again normally dug by a mini digger!

A bit more manhandling and a lamp has been erected Graham, seen below, connecting it to the previously installed duct. 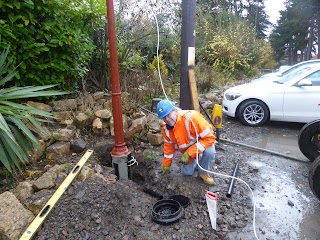 Rain after lunch prevented the third lamp from being installed but people moved onto doing other things.

Graham went back to painting the lamps on platform 2. 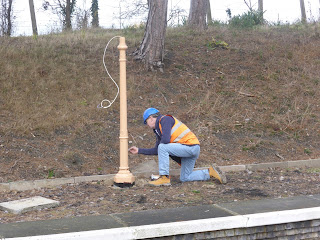 Around the Station building

Dave, Ian, Mike and many others continually cut or supply bricks to the bricklayers at the cafe end of station building. Cement was again mixed by Paul and internal scaffolding adjusted by Keith. Today Bob and Tony were on the reds and the internal block laying was done by Clive and Pete Q. 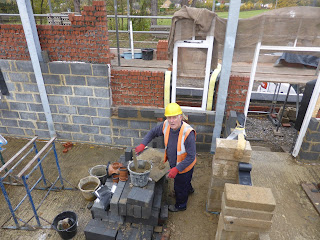 Seen here, Pete trying to catch up to the height of the external red bricks, elsewhere the block work in the ladies toilets was at a height that Dave H and Mike could carry on installing the ceiling joists. 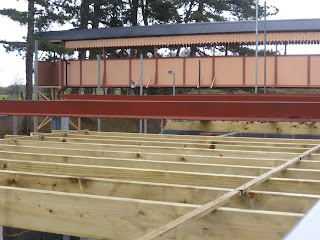 Ceiling Joists now above the ladies toilets and are now ready for levelling and blocks placed between them. 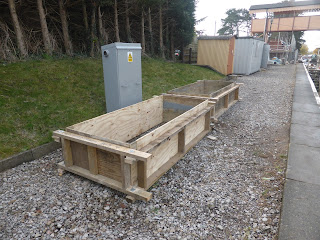 Dave H then went on to finish the second of the shuttering boxes. These are going to be used on platform two staircase. One is for the intermediate landing support and the other for the stairs end posts. One will be reused on platform 1 as a landing support and the other enlarged to include a support for the station canopy pillars.
Next week we will move over to platform two and mark out the positions of where the boxes are going and then hopefully our digger driver will be back to clear the area and dig the two holes!

Posted by David Holdsworth at 10:33