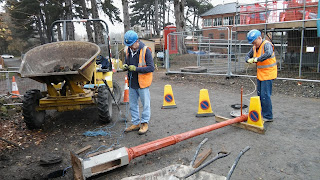 On a dank typical November day 22 volunteers spent the day on various projects.
Graham and Mike set about installing the final lamp post on the far side of the station forecourt. With the hole dug out ready they are threading the cable with a drawstring before the post is stood upright and concreted in. 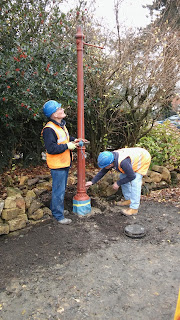 The post, now upright, has been set in concrete and the cable drawn through to the small chamber in the foreground to be later connected to the feed from the station. 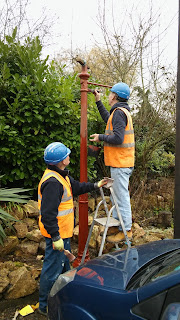 Later on the duo got back to a job they regularly do, painting. A coat of primer being applied to the posts erected last week. By the end of the day all had been primed. 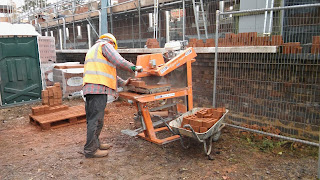 After weeks of cutting bricks with a disc saw it was decided to hire a proper brick cutter. Much easier on the backs of the crew who take turns at this onerous task. Very dusty and dirty, though now with the water bath on the cutter not quite so bad. Mike S and David were the barrow pushers and with Paul on the mixer the brickies were kept supplied. 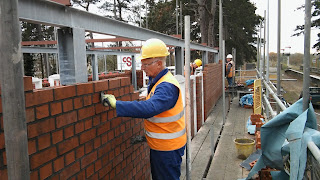 Up on the scaffolding Tony and Bob carried on with raising the walls on the southern platform side of the station building. Peter Q on the inside fetching the blockwork up getting ready for the next set of joists to go on. 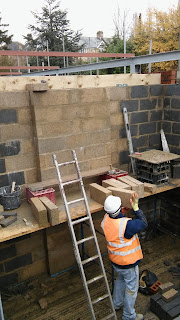 Also on the inside Clive is loading his trestle with some more concrete blocks to carry on building up the false chimney piece. 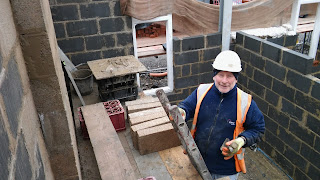 It's nice to see someone happy in their work, Clive about to lay the blocks pre loaded on the trestle. 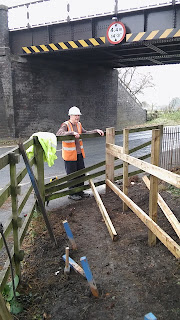 Down the drive the fencing continued. Vic is taking the rails off the old fence to give himself room to fit the rails to the new posts. From the new post in the centre, by Vic's left hand, a panel of spear fencing will be made to join onto the original which will eventually be refurbished.
The fence has had to be set back further to allow for more of a sweep in the entrance to comply with planning regulations. 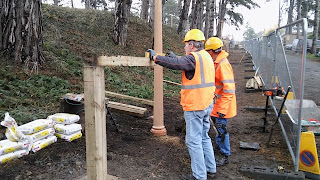 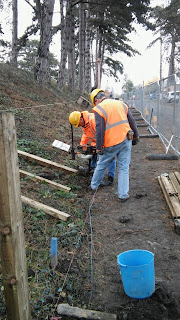 After some more setting out with a post installed further up the drive,  a line is attached at the top and a line set at finished drive level which allows the incline to be catered for. Terry using the auger for the next post hole.
At the end of play five main posts and six intermediates had been erected and the rails across the front section attached. 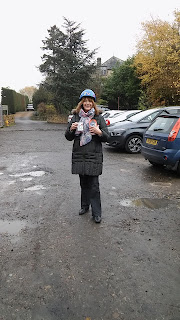 Again other tasks were taking place during the day. Dave H, Mike and Brian helped our bridge engineer, John B, lay out the positions of the footbridge steps foundations. John C, among other jobs, helped by Rod and Terry fitted a heavy duty manhole cover to the main drainage chamber for the station.
Steve and Julie manned the sales shed, Julie seen on the long trek to get essential supplies.


Finally a picture of the Christmas themed table in the sales shed. 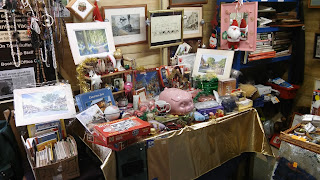