25 people, with nothing better to do, turned up at Broadway today on a coldish day when the ambient temperature stubbornly refused to rise to a level where things like bricklaying would be possible. A temperature of 5 deg C and rising is the minimum requirement for bricks.

This left many of us with little choice but to seek employment on jobs that we knew needed doing but until now could safely be left until the following week when hopefully some-else would grasp the nettle.

Tidying up - that awful phrase - poked its head above the parapet and we were sucked in. The trackbed was the area that needed our attention, particularly north of the station.

This area has been a bit of a dumping ground over the months and years, although we have been a bit more careful lately, so there were many items that had to re-located. But before covering that subject there were a few things on the construction side to highlight 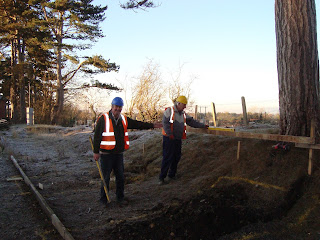 Dave H & Peter Q spent the first hour or so setting up the levels for the footbridge staircase footings and were looking quite pleased with themselves that they had got it somewhere near. The level is one metre above the platform surface, gauged from the top of the coping slabs, and this will allow our bridges engineer to set the levels for the shuttering for the footings. 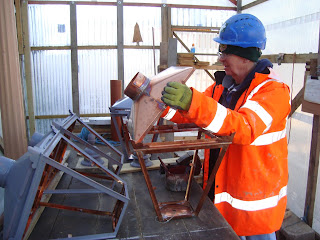 Graham borrowed the carpenter's workshop and, with Mike's help, spent the day painting or priming pieces of metal, depending on what was put in front of him. An undercoat on the pair of gates for the signal box were first in the queue followed by an etch/ primer on the station lamp cases that we had had in stock for a while. Obviously weather doesn't stop painting but does Graham look like he's enjoying it? 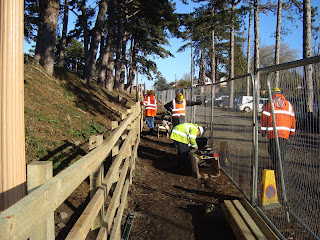 Vic spent the morning with Terry, Pat and Rod on the new wooden fencing along the drive. Vic fitted the rails while the other three worked on planting of more of the posts. 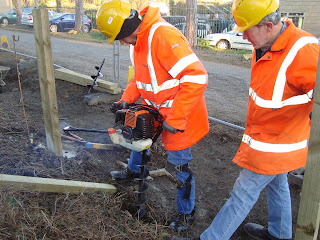 Terry bores the hole for an intermediate post, in the required position, using the auger. The auger has made the fencing work so much easier. After a couple of trial fits and a bit more work with the auger the post is ready for the final adjustment. 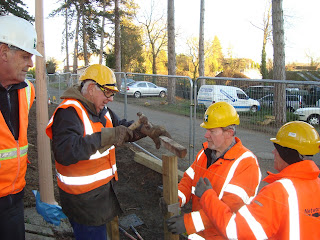 Pat is the one entrusted with the final delicate adjustments to ensure that the post is upright in both planes and is level with the string line which can just be made out across the right of the photo. All that is needed to complete is a small amount of postcrete in the hole, one advantage of using the auger is that the hole is no bigger than absolutely necessary. 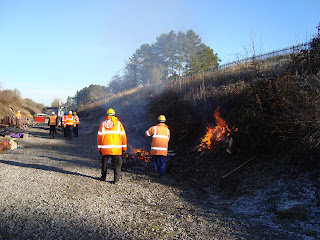 The clean up progressed, a bonfire was able to be started using some add bits of scrap wood lying around. One of the fires is burning a few feet up the cutting side, this was not by accident but in the hope that the heat generated would cause the surrounding brambles catch fire also. No such luck! The brambles were virtually untouched. Plan B? 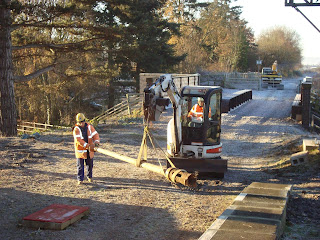 Some lamp posts of the 'corporation' type had been lying on the ground in various areas of the site and the opportunity was taken to gather them into central point. Tony is guiding one of the posts while John C drives the 360 digger steadily along the trackbed. 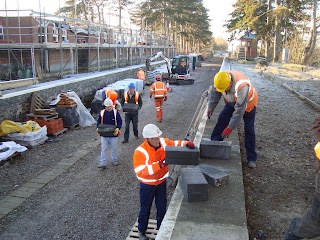 A quantity of Celcon blocks had been purchased in advance of their anticipated usage on platform 2 so part of the job today was to move them and a pallet full of bricks off the trackbed onto the platform nearer where they will be eventually used. The point of this gradual clearing of the trackbed is that when the P/way appear over the horizon we will not have a last minute panic to clear the way for them. Mentioning P/way leads to the activity today on the south side of the Station Road. Contractors were busy clearing and levelling a site ready to take deliveries of several lorry loads of new ballast. The plan is that the ballast will be tipped here by the lorries and in the following couple of weeks it will then be transported up to where it's needed by a couple of dumper trucks loaded by JCB Steve.
Posted by Unknown at 22:33