Sparks Fly, Inside Information, Checking Out All The Angles, Mixing It and A Load Of Old Coblers!

Another busy and productive day at Broadway with 27 volunteers working away on various projects.

The Fencing team of Rod, Steve and Peter H joined in the afternoon by Ron and Graham continued with their work on the Cotswold side of the cutting. One more panel was installed and then it was the turn of the gate to be installed. The old gate has been in situ for many years so a new one was ordered using the same material as the fencing: the point was now reached where the old gate post had to be removed. 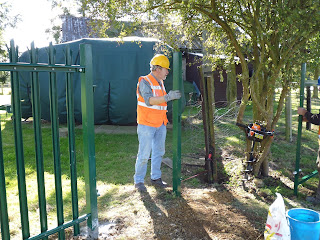 Rod holding the new right hand gate post and waiting for confirmation that all was well. Just to the right of Rod is the old post leaning at a bit of an angle. Steve was tasked with cutting off the old post at ground level so as not to foul the new fencing. 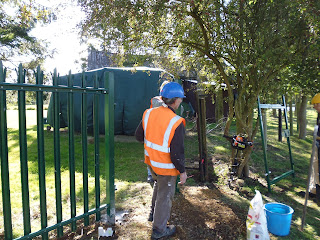 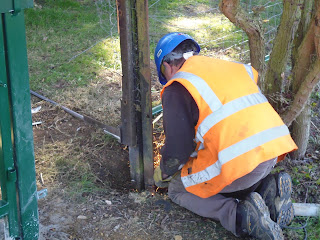 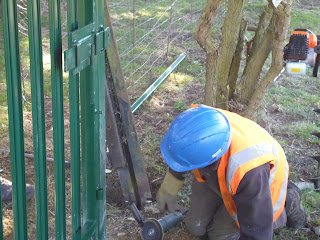 After a couple of blades had been used the rail almost cut through. They certainly used very good steel in GWR days! 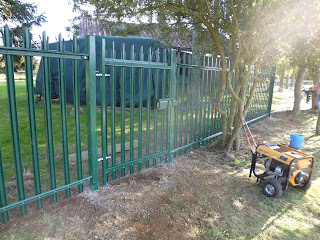 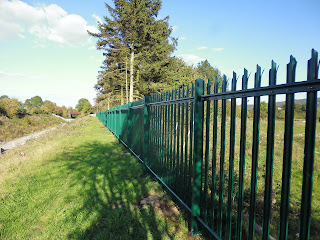 Down in the driveway ducting for power supply for the lamp posts was being installed. 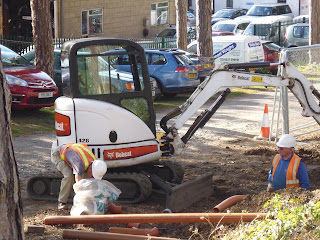 Ron is looking in the parts bag for the angle to be attached to the pipework with John C looking on to make sure the correct part was located. 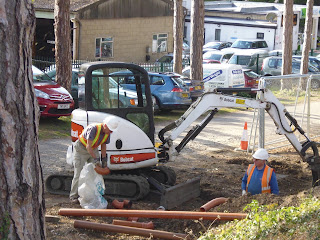 Ah! y'er 'tis!  Ron has found the correct part to John's satisfaction! The power supply will branch off at this point in both directions to connect to the Victorian lamp posts which will be used and which we have in stock. On a dark winters night it will look very atmospheric and very much in keeping with the period..

At the station building work continued on the driveway and platform sides. 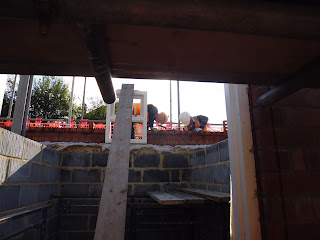 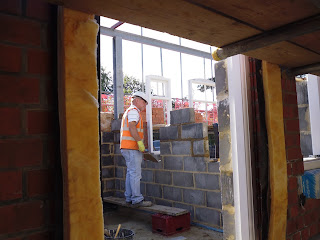 While Clive was adding more internal blocks. The internal work is keeping up well with progress on the outside.. 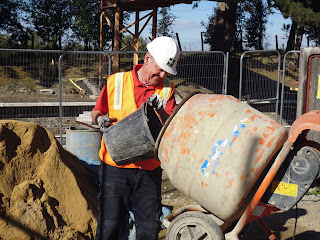 Paul, our cement mixer exrtaordinaire, is adding just the right amount of water for yet another mix to keep the brickies happy. 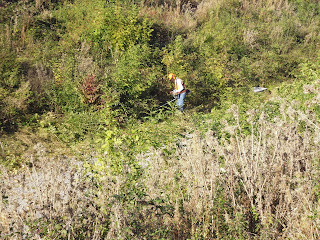 The vegetation in the cutting has really taken off this summer after having been well cut back last winter and spring. Roger J is in the thick of it using the brush cutter on the Malvern side of the cutting. 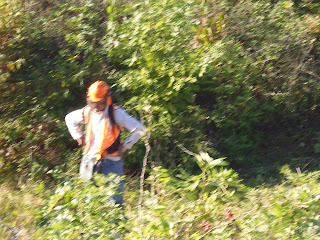 Just where do I go from here! Roger taking a well earned break and pondering the next bit to be tackled. A strip of a couple of yards along the lower edge of the cutting is being cleared initially hopefully followed by machines at a later date. 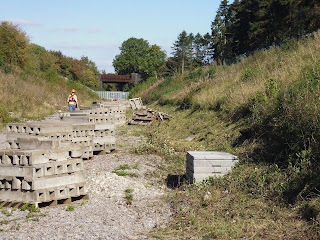 The lower sides of the cutting being gradually cleared. The extent of the vegetation growth can clearly been to the right. The concrete troughs in the foreground will soon be moved south to be used by the S & T department as part of the signalling project 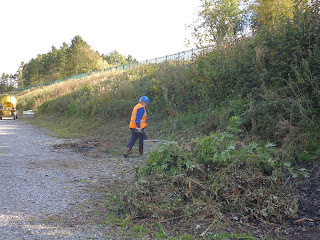 Chris H was also working way further south at the clearance and a pile his of handiwork is clearly evident. 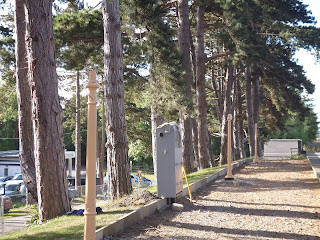 The replica GWR style lamp posts have now been put in place on the south end of platform 1 and are awaiting their lanterns. The trackside cabinet will provide power for them and also the lamps on the driveway. 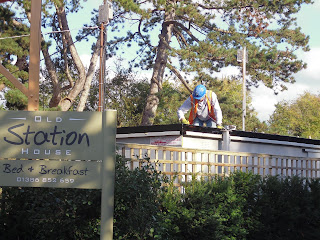 A painter on a hot tin roof! It's Graham our master painter putting a fresh coat of paint on the mess room roof before the winter weather sets in. The mess room has served us very well for several years and every now and then needs a bit of TLC, This should keep it in good nick for several more years. 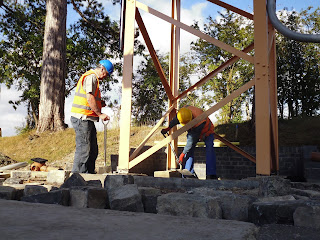 And finally  where angels fear to tread! Peter Q and Dave preparing the base for where the old large cobble stones, seen  in the foreground, will be laid to rest! This will provide a very neat finish to the area underneath the footbridge towers. 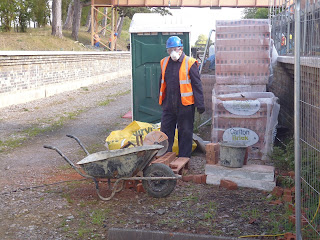 No, there wasn't a imminent gas attack by the Luftwaffe! Brian wearing the correct and very necessary protection whilst cutting the headers for use by the brickies who need a constant supply of them.
Mike S provided the motive power with his wheel barrow to move them and more whole bricks onto the construction site.

Sparks flew, the gate was closed, all  the angles were examined together with an inside job. We saw the wood for the trees, we will now have to tread carefully with our lamp posts neatly in a row!