A Hole Too Far 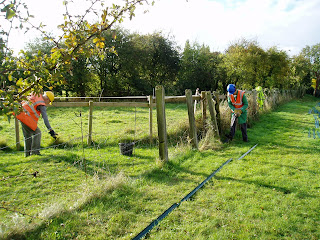 Saturday and Monday work continued on the main station building, with more brickwork completed. A team also took more fencing supplies to the top of the cutting so that fence erection could continue today.

First thing this morning Vic and Dave are working, in front of fencing team, preparing the way. The landowners wire fence is removed from the railways original wooden posts and supported temporarily with steel spikes. The remains of the railway wire fence is removed to be scrapped. The wooden posts are then cut off or removed if they are in the way of a new post. The end of the run can just about be seen in the distance, about a hundred yards to go. 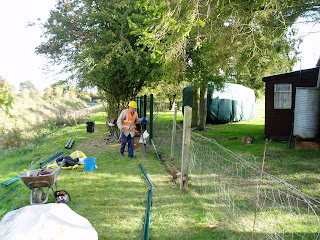 Looking the other way Steve, Peter H and Rod have already got the first upright in and Peter is marking out the position of the next whilst Steve starts attaching the pallisades. Every hole today was a challenge from tree roots to very stoney ground which the augur didn't like at all, meaning a lot of work with the long post chisels.
Six panels completed and the decision to put one extra post in before home turned out not to be a good one. 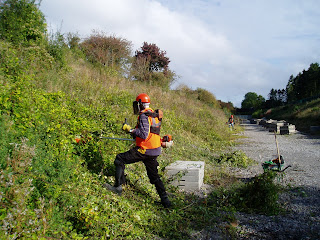 Work continued apace on clearing the vegatation from the bottom of the cutting so that the Permanent Way team can see the full width of the formation. Pat and Roger at work with the brushcutters. In the background are the signal cabling troughs that have been stored here for several years. The S & T department have been repalletising them prior to moving south to be used through the station. 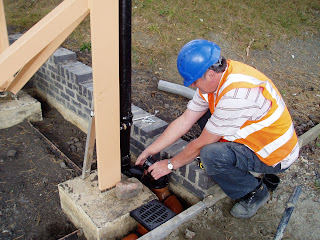 Further south Dave H is seen finishing one of the downpipes from the footbridge. It empties into the drainage pipes which will connect to other downpipes off the bridge and stairs before being connected to the centre drain. The drainpipes will eventually be buried as the area under the bridge towers are brought up to platform level. 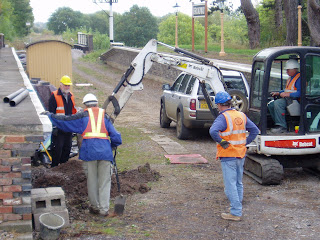 Further south still Ian, Ron, Graham and John C, driving the digger, are looking for a water pipe which runs up the side of the track bed. We know it's there somewhere, it's on the plan! The task being to tee off a feed for the signal box. 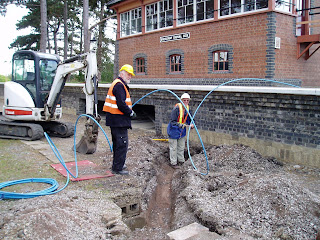 Pipe found and trench dug across the track bed, Ron and Ian measure off the required length of pipe from a coil that seems to have a mind of its own. 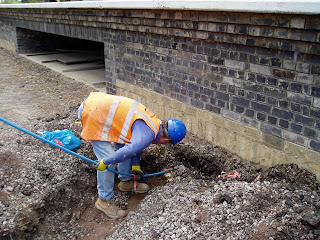 Whilst the others wait in the locking room of the signal box, Graham feeds the pipe through a duct under the platform, installed during construction, to come up through the floor. After unexpectedly having to get a drawstring through the duct to assist the stiff pipe around the upturn in the duct the job was done. By the end of the day a tap was installed, the joint made, water on and the trench filled in. 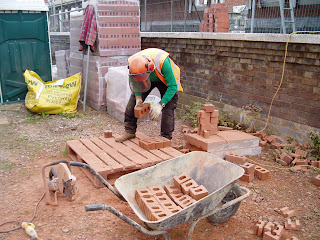 Brian M getting ready to cut even more headers
to join those in the barrow. I bet he's lost count of how many he's cut must be many hundreds now.

A mucky, noisy job which he has shared with Jo and Brian T over many weeks. 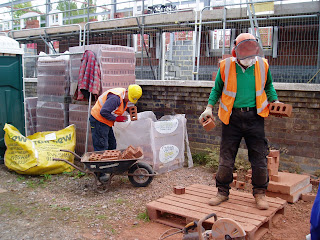 Meanwhile Mike wheels yet more bricks round from where they are stored to be loaded onto the scaffolding for the brickies to lay. 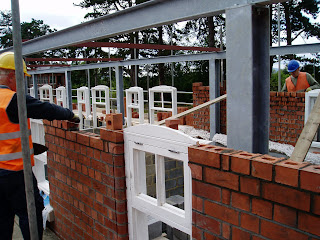 Up on the scaffolding Tony, drive side, and John, platform side carry on ever upwards. Now getting towards the top of the windows. When the inside blockwork is up to the same level a concrete lintel will go across behind the top moulding of the window and a brick arch built  above the window. 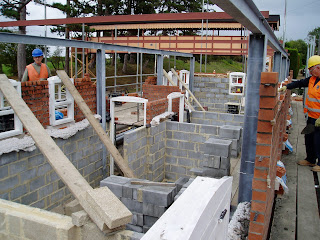 A view in the opposite direction shows the blockwork rising inside the area of Ladies, Gents and disabled toilets. 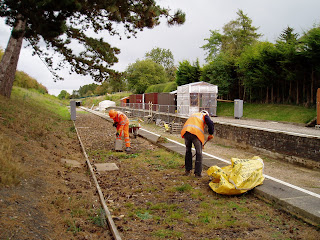 Roger B and Gordon clearing weed off platform two. A lot of effort goes in to keeping the site as tidy as possible. 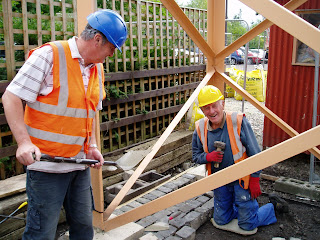 After getting as far as they could with the downpipes on the platform two tower Peter Q and Dave H returned to the stone sett laying under the platform one tower.
Elsewhere a start was made on installing the first of the shuttering boxes for the driveway lampposts. Jo took delivery of more of the replica GWR lamp posts and Julie manned the sales shed.