Due to further technical problems we have been unable to show you a fine pair of shires ploughing or the windmill slowing turning in the wind! However the blog team are now back from their late summer breaks and normal service has now resumed from the local transmitter!

While we have been "off air" much activity has taken place at Broadway and today 25 volunteers were on site to continue with the good work.

Just to give you a taste of the tasks on the cards today here is the day's work schedule. 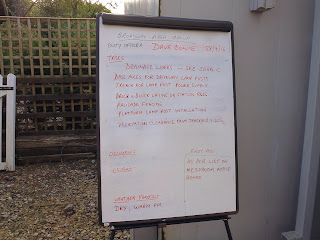 As you see we had a very busy day ahead of us.

The southern wing wall on the Broadway side of the Evesham road bridge is being repaired by contractors and a traffic light controlled one way system is in place. To take advantage of this Graham and Mike took the opportunity to make good some damage to the paint work on the bridge which has been struck on several occasions since being renovated last year - quite incredible considering all the notices and lighting that is on it. 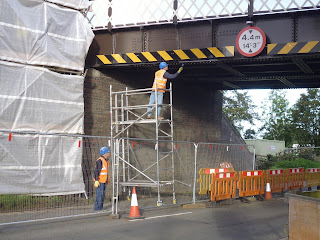 The BT services were re-routed last Friday and the telegraph pole that was located outside the station building has now been removed together with the overhead wires along the driveway. It really does make a tremendous difference to appearance of the station building, After several dumper loads of ballast had been moved up to the driveway this is a view of the cleared driveway looking north. 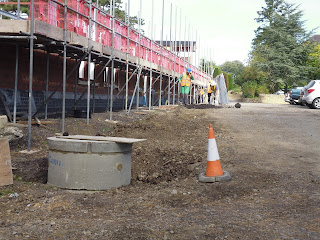 Here Ron T and David are levelling another load of ballast supplied by John C on the mini digger down on the car park and Tony on the dumper. 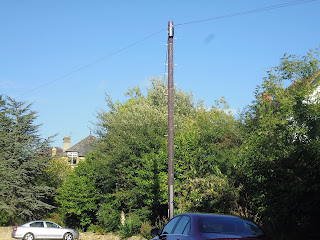 Earlier in the day the last concrete ring for the drainage inspection chamber was fitted by John C, Tony and Paul. 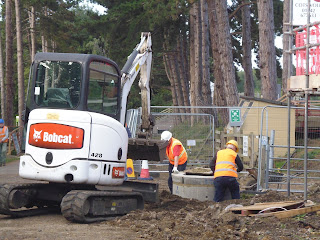 The ground will be made up to height when the gap on platform 1 in infilled.

Work continued on the station building and John S was the sole brickie working on it today. 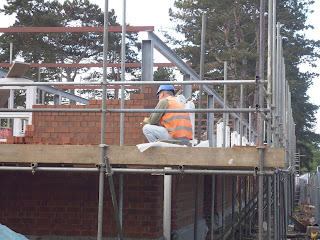 John S is seen here working on the north face of the station building. Later in the day he laid a few more courses on the platform side. 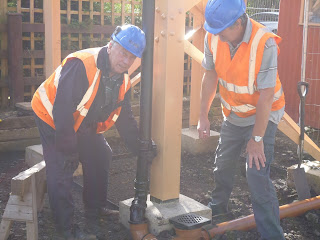 Brian and Dave working on the left hand drain pipe. The bracket has yet to be attached to the pillar and a hole for the bolt holding it place drilled. A very long and difficult job due to the very hard steel the pillars are made of. 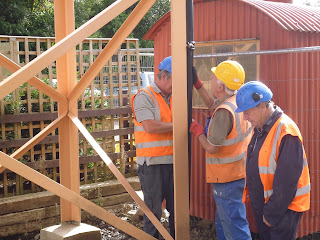 Peter Q provided his expert skills and helped Brain and Dave to install the right hand drain pipe. The pipes are of cast iron and totally in keeping with the pipework that was on the original footbridge.


Up on the Cotswold side of the cutting the fencing team were hard at work installing another 6 panels and preparing the hole for the first gate post, This  gate is being put in place to enable the adjacent landowner to gain access to the top of the cutting and to mow it for us. 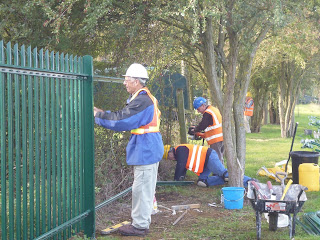 Ron T is attaching the uprights while Terry (on all fours) Steve and Vic prepare another hole for the next post. Some of the holes for the posts were very troublesome as they were located just where the old wooden fencing posts had broken off. Removing the remains of an old post is no easy task and one took an hour or so to remove! 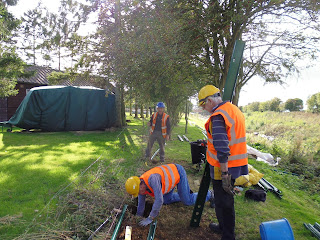 .
Terry, on all fours yet again, watched by Pat and Steve works on the very difficult post.

Down in the cutting vegetation clearance continued with much enthusiasm, 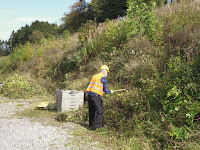 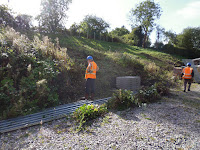 Ian and Chris attack the undergrowth alongside the trackbed in the cutting to the north of the station. 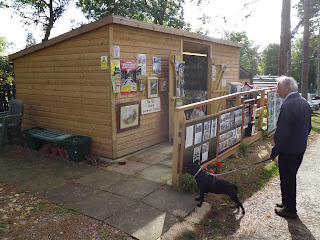 And last but not least Julie was busy in the sales shed with a good steady stream of visitors. The proceeds of her sales are much appreciated by all at Broadway.