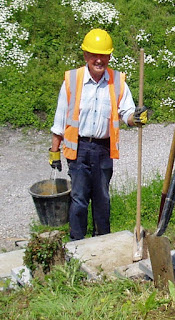 Today I have to start with some very sad news for the Broadway group.
Peter Hickox, our friend and colleague, who had worked on the fencing all last Wednesday, passed away in his sleep early Thursday morning.
Peter had worked at Broadway since the work started on the first section of Platform 1. He was a truly lovely man who would turn his hand to any job required and do it with a smile, nothing was too much trouble however difficult. Peter had also been one of the blog team of late.
He will be greatly missed at Broadway and it seems so unfair that he will not see the first train arrive, something for which he had worked for so long.
We at Broadway send our condolences to his family. Rest in peace old friend. 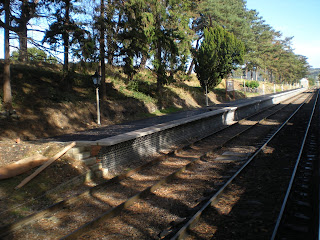 The next two pictures are in way of a final update on the building of Platform 2 at Cheltenham Race Course station. As you know this was built mainly by the Broadway volunteers. On Friday last contractors laid the tarmacadam to finish the job. This picture looking towards Toddington shows the impressive length of the platform, with the signal box in the distance. 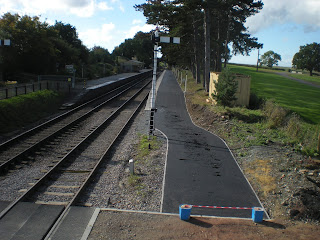 This picture taken from the signal box, looking the other way, shows the path from the bottom of the ramp to the vehicle crossing. This crossing takes traffic to one of the parking areas and is manned on race days when any trains are running.
Pictures by Bob W, one of the team that built the platform.
Another off site job undertaken recently was the recovery of a hundred 2ft x 2ft 6 slabs from a kind donor. This task was undertaken by Terry, Keith S and Steve and Paul our friend from Tecton who helps us with transport. 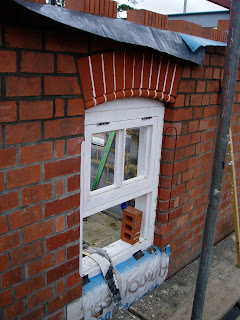 A quick catch up on Saturday and Monday. More bricklaying was carried out on the station building. One of the highlights being the forming of the first arch over the window in the north end of the building, this was done by John C. It looks brilliant, the blue plastic is necessary to protect the drying mortar from any rain. 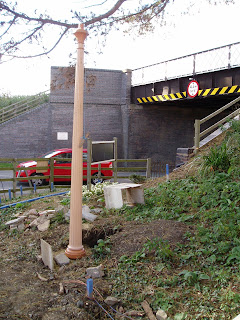 Another first was the erection of the first of the lampposts on the road end of the drive. The line of blue pegs is the new profile for the drive entrance to comply with modern regulations. You can also just about make out where the contractors did some pointing on the bridge wing wall during the recent period of bridge repair. The original signal box was built on piers behind this wall. 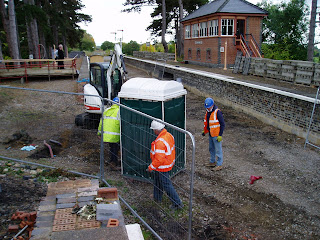 Today at Broadway 26 volunteers undertook various jobs. A trench had to be dug across the entrance to the site this morning. It was at this critical time that the contractor turned up to 'service' the loo.
The vehicle could not reach the loo, Broadway volunteers don't accept defeat so Graham, Mike and John C decided to take the loo to the vehicle. Be grateful we haven't got smelly vision. 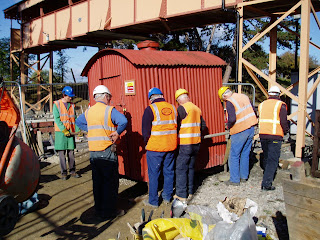 More determination when it was necessary to move this old lamp hut which had been in use to store the cement and mixer for the station building. It just so happened, for convenience at the start of the build, that it had been sited just where we now want to dig the footings for the footbridge stairs. 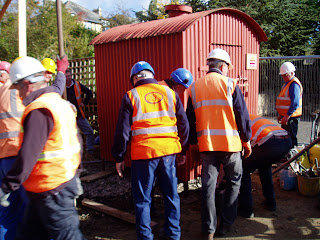 With no crane available several methods were tried. Much effort was exerted and eventually it had to give in and move to it's new location. 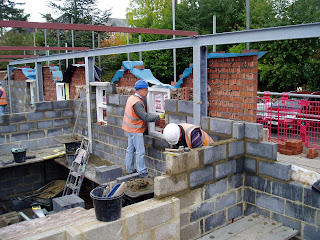 On the station building the main effort today was to bring the block work inner walls up to the level of the outside brickwork. Bob W, John S and Tony giving a hand to Clive, far left of picture, to do this.
This will enable the lintels to be positioned over the windows and the arches formed. 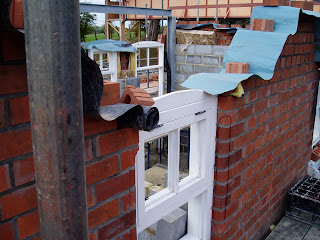 This picture shows the outer wall brickwork well above the window waiting for the block work inside to catch up. 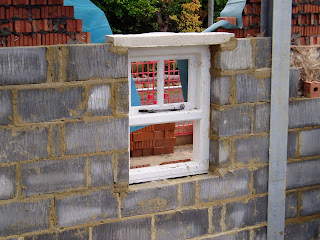 From the inside the block work has reached a level where the lintel could be positioned and now the arch can be formed on the outside. 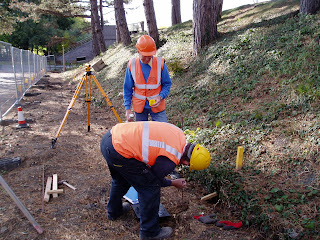 Down on the drive Gordon ,who does our surveying, assisted by Mike S is setting out the positions and levels required for lampposts, pathway and drive. 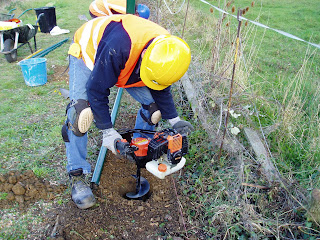 
Up on the cutting top Terry is finishing off one of the holes for a fence post. It seemed strange up here today as Peter H was with us last week.
Again we had trouble with tree stumps in the way, very stoney ground and to cap it all a wasps nest. 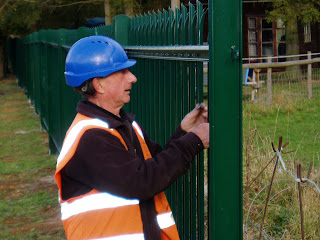 Steve bolting on his 152nd palisade today, only a couple more to go and we'll let him go home. 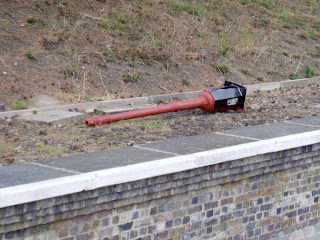 Again other jobs were worked on around the site.
This is one of three replica GWR lamp posts that Jo took delivery of from the foundry today. He then promptly put a coat of bitumen on the bases to protect them when they are concreted in. 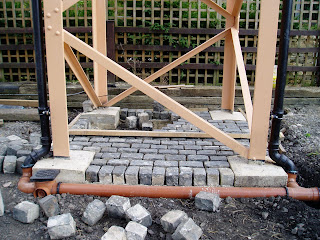 Peter Q and Dave continued laying the setts under the footbridge towers.
Keith G and David continued with the clearance of the vegetation at the foot of the cutting.
A skip supplied by a local scrap dealer was filled with waste metal and Jim B manned the shop