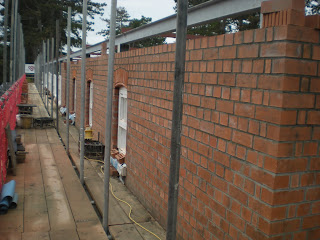 First a catch up from Saturday and Monday, mainly the work centred on the station building John C continued with further window arches. This time on two of the toilet windows which face on to the station forecourt. The other brickies carried on with the internal blockwork and courses were laid above the arches. 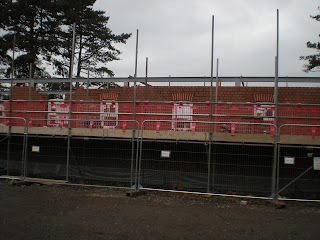 This shot from the other side of the forecourt shows the complete toilet block and how near the top of the wall is. 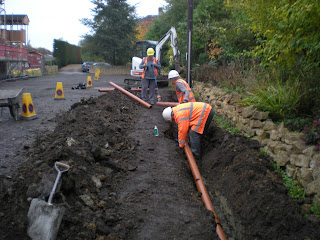 On Tuesday John C, Bob W, Bob J and Vic put in an extra shift to start installing the ducting for the forecourt lighting. As the forecourt is also the access for the B&B in the old station masters house, this needed doing on a day when not too many cars were around. 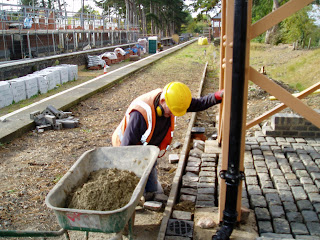 On to today when 26 volunteers continued with all sorts of tasks, it was quite a pleasant day and we even had some sunshine.
Peter Q is about to start pointing up the blue setts under the footbridge tower on platform 2. The first two rows having had to be cut through first as they go over the rainwater drain. 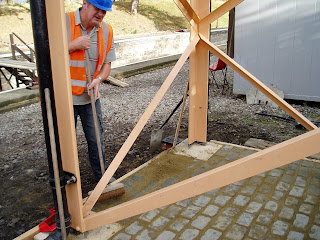 On platform 1 Dave is just finishing off with the brush, eventually the tarmac will butt up to setts when the platform is brought up to finished level. 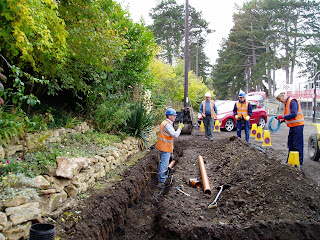 John C, Graham, Mike and Keith S carried on installing the ducting on the forecourt, carefully inserting the draw cord before jointing the ducting and back filling. The trench in the foreground will bring the feed from the station, only half of this could be dug today and will need to be back filled before the other part is dug. 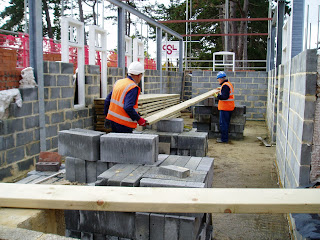 Today also saw the delivery of the timber rafters which will need to be installed before the steelwork for the roof. Keith S and Mike stacking them with spacers to allow for air circulation. 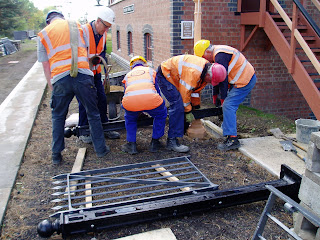 Later in the day Dave H, Keith S, Chris, Jo and Peter Q about to lift a very heavy cast gate post into position. A socket had been precast during back filling the platform, the socket will be filled with concrete when the post is in position. The other post and one of the gates are led in the foreground. These gates will be part of the spear fencing and will give the signalman access to the steps to the operating room. A similar pair on the other side will give access to the locking room. 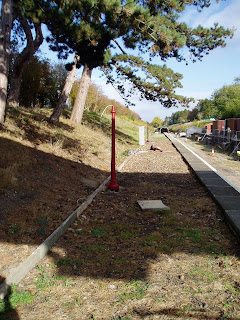 Looking the other way another two of the replica GWR lamp posts that Jo has sourced have been erected and Graham has given them another coat of primer. Jo later took delivery of a further three posts from the foundry. 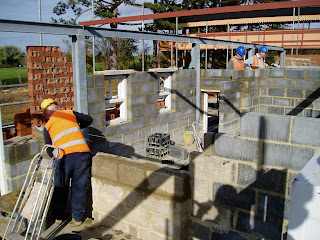 Tony and John S carried on with the blockwork  in the toilet area and booking office. Tony working on what will be a dummy fireplace. Paul did the mixing, fetching and carrying. 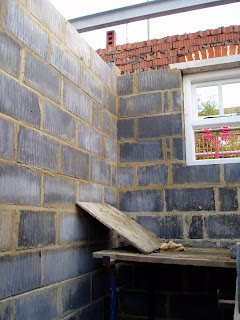 The brickies are winning, one more course of blockwork on this part of the toilet and then the rafters will be set into the last course. 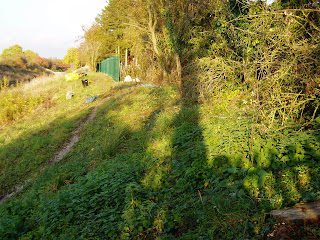 Up on the top of the cutting Terry, Vic, Steve B and Rod carried on with the fencing, a further seven panels completed with two more uprights set in so the palisades can be fitted Saturday. With the help of Brian M and his chainsaw the last fourteen posts, of the old fence, were removed  along with some tree stumps that were in the way. This picture taken later in the day shows where we have got to and the shadow is the fence we need to join onto; nearly there.

During the morning Brian  M and Pat had hauled their chainsaw and brush cutter about half a mile to the end of the lineside drainage system way outside the station confines. The system finishes at a headwall and becomes an open ditch which flows into a water course. The task was to clear brush and small self seeded trees to enable the Lineside Drainage crew to get a small digger in to improve the ditch and remove years worth of debris. A good start was made and the task will be finished next week. Gordon carried on setting up the levels for the upgrade of the station drive and Julie manned the sales shed.