Another quiet Saturday with only eight of us on site and that was down to four by lunch time so not a great deal of progress was possible, those of us who were there were hampered by the weather which threatened rain and delivered it a bit before the expected hour so working time was short. 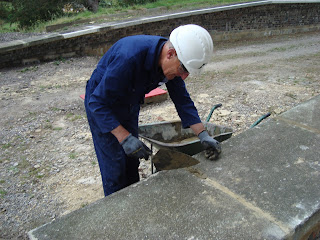 After a brief discussion about whether it was worth dragging the mixer out of the shed or mixing in the barrow it was decided that, as two of us would be using mortar, it would be worth it. Keith and John liberated the mixer and Keith set to with a half mix of black followed by a similar quantity of brown. The brown was needed to point up the edging slabs that were positioned on Wednesday. 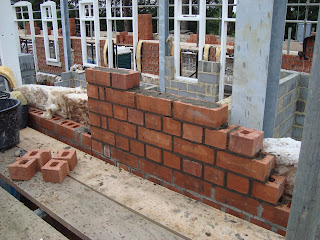 The black mortar was of course for the brick laying on the station but as only one brickie was on hand smaller amounts of mix were the order. Putting up the fourth corner on the north end was the priority and thus was just about accomplished. Much more was hoped for but as can be seen on the stanchion the rain has just arrived. The four snap headers on the scaffold boards were laid and the pointing completed before it had to be covered up. The small amount laid should at least allow the Monday gang to lay the next batch of window cills. 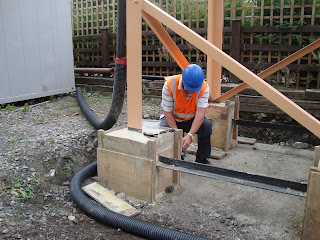 Dave, alone in the Carpentry/ Footbridge dept. today, started by removing the shuttering that was built around the footbridge supports recently, now that the concrete has been cast. It is planned to do the same on the opposite side when conditions allow. The fixing bolts for the tower, which when built had some flexibility, are now encased in the concrete cast and the cast has been shaped on the top to allow water to run off. 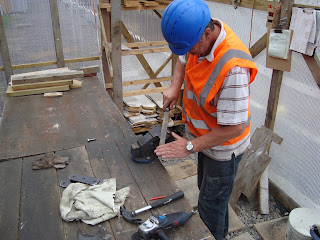 Because the shuttering could not be built around the other tower legs, due to excess standing water after the downpipe temporary flex hose had slipped off, the next job on the to do list was to make a small quantity of fixing brackets ready for when further sections of rain water downpipes can be fitted although this may not be in the near future. Four brackets made so far not sure if this has completed the batch. 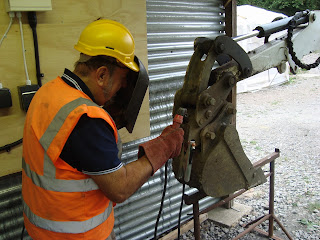 No apologies for this posed photo in the circumstances but the photographer was well out of the way before an arc was struck and at this point the power was not even on. However Peter K, who has many skills in welding and fabrication, was requested to repair the business end of the "on hire" excavator with the full agreement of the hire company as it would be a few days before they could get round to it and we knew a man who could so win - win. The problem was the device which aids the bucket release had broken off and by the look of it, this break was not the first! 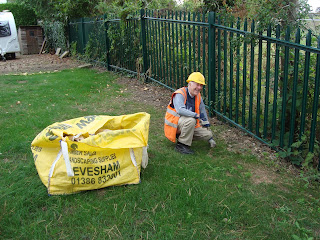 Turning to vegetation control, Vic seems to be very happy in his work or perhaps it was something that was said, whatever, a return to the area just outside the bric-a-brac shed to dispose of the weeds which had sprouted while he was away. 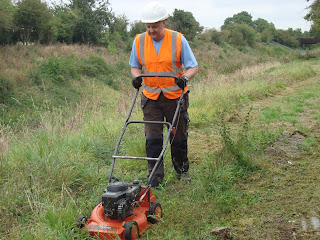 Mowerman Phil, last seen trimming the grass outside the signal box has moved his area of concentration to the top of the cutting in advance of where the new fence is going in. This patch of grass proved to be a bit taxing on the mower as it had to take an enforced breather just before lunch, maybe another job for Peter K. 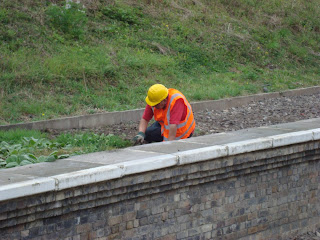 Keith G, who keeps our COSHH data up to date, had a spell on the computer doing the COSHH stuff first thing and then moved his centre of operation to platform 2 to attack the weeds and it's clear where he has been. He was asked if his garden is weeded to the same standard and he replied rather quietly "no!".