There were 24 volunteers on site who enjoyed some very warm and humid working conditions,
The main hive of activity was down on the driveway installing more ducting to enable the BT services to be re-routed to a new pole located alongside the garden in the upper car park thus enabling the pole outside the station building to be removed. 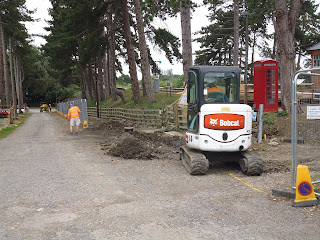 John C, assisted by Mike and Steve B, is in the mini digger extending the ducting trench northwards towards the new pole on the other side of the car park. 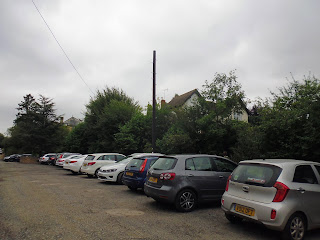 This is the eventual destination of the BT ducting. This will greatly improve the area around the station building.

And this is where it all happens at the other end! 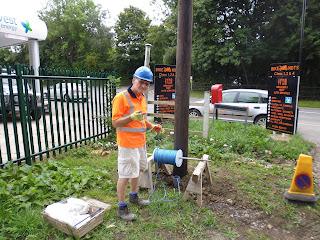 Mike is helping John C, up near the station building, threading the cord into the ducting which will be used to pull the new cable through. The pole beside Mike is another new one recently put into place at the bottom of the driveway. 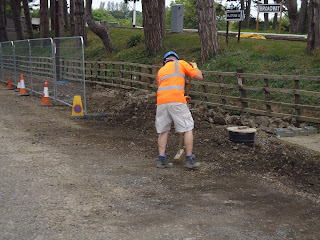 After a further section of the trench had been back filled Mike was tidying up again! At the end of the day great progress had been made despite have to carefully avoid several existing services, inspection covers etc along the way. 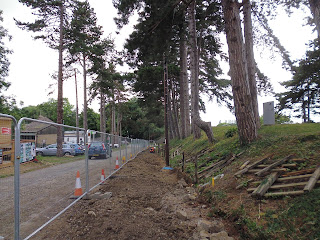 In conjunction with the services being installed the opportunity has been taken to remove the original wooden fencing that went alongside the western side of the driveway. This very old fencing (it's date is not known) had become very rotten and is in need of replacement. New wooden fencing, in keeping with the heritage design principles, will eventually replace it. The picture above shows the driveway looking south minus the fencing. 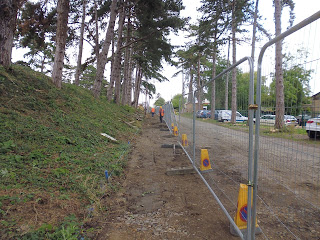 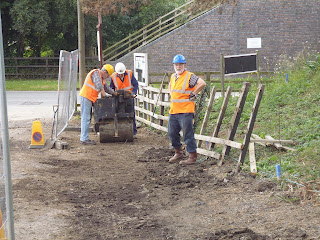 The team of Keith G, Keith S and Chris led by Rod making good the ground where the services have been installed, The fencing, in poor state, has just started to be removed. 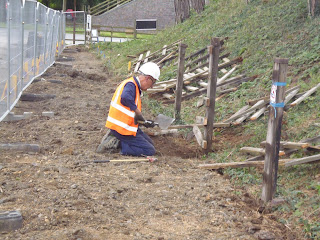 Some of the posts were very difficult to remove and Keith S is down on all fours in order to remove one of the more stubborn ones.

Other tasks were also underway around the site. Work continued in putting the shuttering in place around the pillars of the footbridge on platform 2 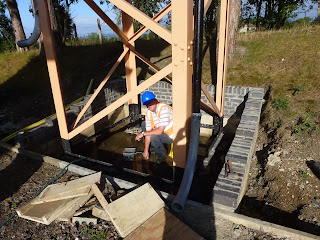 Before any work could take place the area containing the pillars had to be cleared of rain water from recent showers. 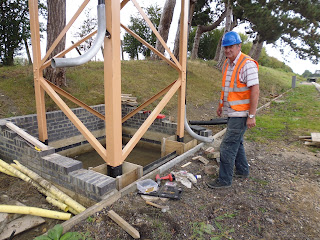 Once all the water had been baled out Dave and Mike S started work on the shuttering around the pillars in readiness for concreting to begin next week.

Work continued on the station building with a full team of brickies on site - Bob W Tony B and
John S ably assisted by Paul on the mixer. 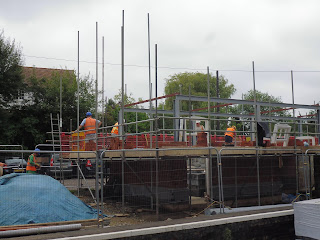 The brickies working away up on the scaffolding and inside the station building Clive was busy           laying more internal blocks. 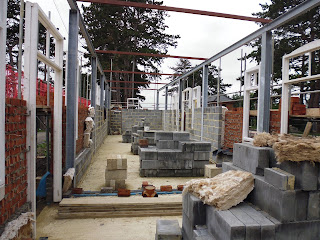 This is a rarely seen view (at the moment) of the shop and cafe area and it gives a good idea of its eventual size. It will have a real coal fire in the winter and will be an ideal spot to be when waiting for your train on a cold winter's day!

Down on the platform Brian and David were cutting and carrying up to the brickies more snap headers. This is a very dusty job and Brian is usually to be seen behind a cloud of brick dust. 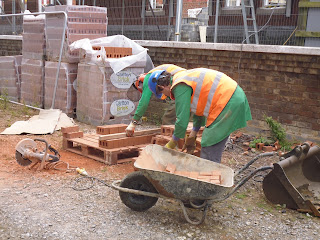 Brian is preparing the next batch for cutting and David is loading up the wheel barrow.

Work on the Fencing on the Cotswold side of the cutting has taken a break for a couple of weeks but today more supplies were delivered so that work can soon restart. 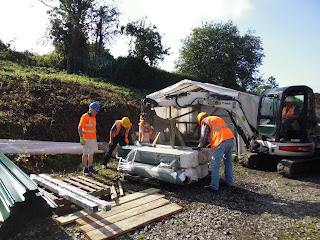 Fencing materials being offloaded and stacked ready for use hopefully next week. 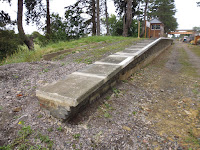 The slopes leading down to where the barrow crossing will eventually be located at the southern ends of platforms 1 & 2, have now been completed and pointed up. This is platform 2 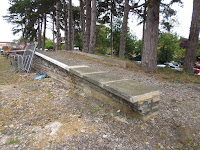 and this is a view of platform 1.  All looking very neat and tidy now.


It was a very busy and productive day despite the very humid working conditions.