Down came the Scaffolding

27 volunteers turn out today, weather was overcast but fine and the forecast of rain came to nothing but for the first time since last winter the word "cold" was used. It was mainly due to the wind blowing down the platform from the south, a chilly wind but not cold !

First at the footbridge.

The usual team of Pete Q, Dave H and Brian had been tasked to fill the four shuttering boxes around the legs of the foot bridge with concrete.

Pete, seen in the first picture delivering the first of many, many wheel barrows. The main problem was that he had to share the mixer, which was mixing the Stations bricklayers cement , Keith`s cement for the Copping slabs and our Concrete.


Picture on the right shows the finished article, Saturday will see the shuttering removed and the area will then be filled with used ballast and leveled to the existing platform ballast height.

Of course every job needs the expert touch, below John C is giving the tops an extra smoothing just to iron out the remaining lumps and bumps. 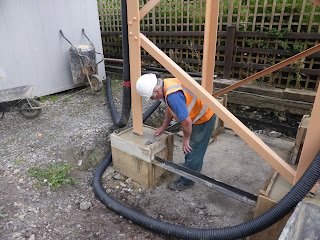 The black pipes seen around the tower legs are a temporary method of taking the water away from the base of the towers. In the up and coming weeks, once the ground level has been made up, something more permanent will be installed and the down pipes eventually connected to the track drains.

Whilst the gang were working on the platform 1 tower base the scaffolding erectors were removing the scaffolding from the whole of the south side. Here, the first picture of the footbridge with out anything around it since last April. 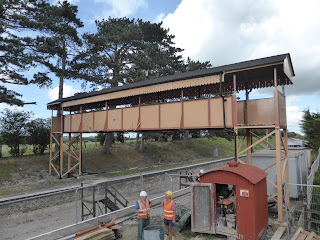 Last Saturday bricks had started to be hoisted up on to the newly erected scaffolding around the station building, today that carried on at a pace. A steady convoy of wheel barrows carried bricks from the track bed in front of platform 1 to the only place with a ladder, at the north side of the station. Even Roger had to lend a hand to help the flagging Ray! Below right, Mike and his barrow load awaiting his turn whilst bricks are lifted to the awaiting pair who stack them and eventually distribute them around the scaffolding. 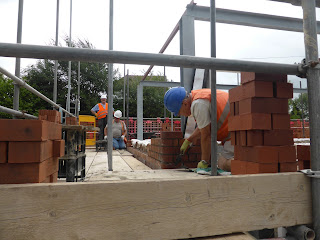 Meanwhile inside Clive carried on with the block laying.

Elsewhere on the track bed, Brian M was doing an excellent and very dirty job of brick cutting which were then barrowed away up to the station building then up on to the scaffolding ready for use.

No fencing parts available today to carry on the installation on top of the embankment, all that was left to do was to modify some pieces, cut and re-drill etc. This was carried out by Keith and Terry using the pillar drill which we all think is the best thing since sliced bread, because of the amount of work that has been done on it in the last few months!!!


The arrival of the Fairview lorry then saw Rod and Terry head down to the ends of Platforms 1 and 2 to replace the coping slabs. Keith was in charge of the cement, 2 wheel barrow loads this time. Terry measured up and Rod adjusted and eventually all was correct and with the slaps bedded in. it was then on to the next one at the far end of platform 1 !

Vic also not needed on the fence line reverted back to gardening the area above the Broadway bric-a-brac shed. Mainly this time of year its endless weeding, he soon filled this "small" bag and then to the bonfire! 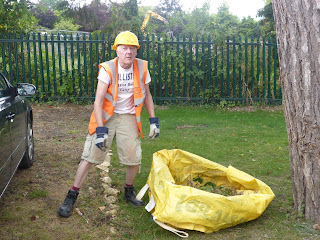 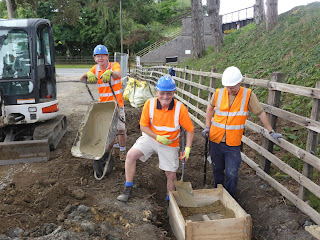 Over the other side of the drive a " happy " group of volunteers have just finished concreting another manhole on the sewer pipe. After this and with the help John C in the mini digger, more infilling of the trenching was accomplished. The excess soil from the trenching was again taken and put by the side of the signal box to build up the ground.

Another productive day at Broadway and I bet a few volunteers will go to bed tonight with the sight of red bricks passing before there eyes, sweet dreams!
Posted by David Holdsworth at 20:34