A little bit of progress

Volunteer numbers were not great again this week only 8 in the morning dropping to 5 again in the afternoon, this, in addition to the abysmal weather, dictated that the work undertaken was severely limited in its coverage so not much to tell today.

The rain rained all morning and so put the kibosh on any thoughts of bricklaying. 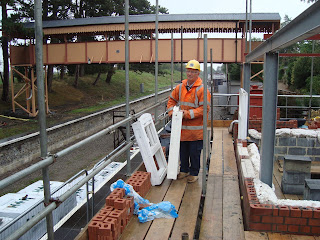 So the best that Tony and John could do was prepare the way for the next work day when the weather is expected to be better. With the cills now built in to a sufficient level it is necessary to position the remaining window frames on this end of the building. At least the frames are now on the scaffolding ready and the other paraphernalia to hold them in position on the cill is also to hand.

The situation on fencing was much about the same. 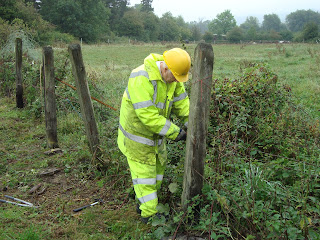 Vic was able to continue the preparation for the next big bash by stripping the old wire, as far as its possible to do, off the old fence posts. 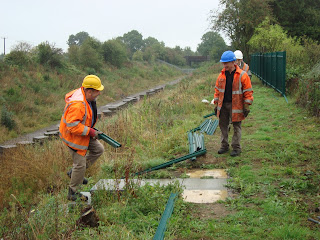 Peter K, Steve and Robin spent half the morning positioning some of the components, from the latest delivery of fencing, along the route. After climbing the steps up the cutting sides a few times leg muscles start to complain but they should have given the Wednesday crew a good start.


The conditions didn't stop the work on the driveway. 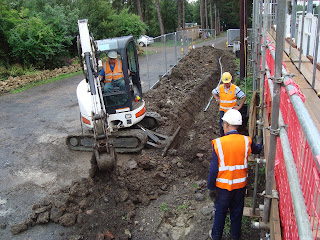 John C on the digger assisted at the outset by Keith and later Tony pushed on with the trenching and ducting, the grey BT duct can be seen snaking its way back towards the main road. This is about as far trench needs to go to reach a position opposite the new BT pole across the drive. A start has just been made on connecting the trench to the station building with a new trench branching off right. This new trench had to be completed with shovels because of the risk of cutting through existing cabling 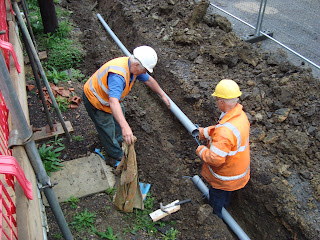 A vital part of the ducting process is feeding the pull string through which comes through remarkably easy considering the length that it has reached now. Tony and John are in the process of attaching the next length of pipe, the sacking is important to keep the ends of both pipes clean for joining 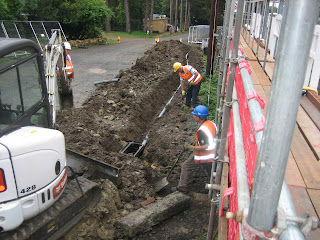 By the middle of the day the crew were able to position the black plastic inspection/ junction box in the trench at the end of the main run, pipes will run to both right and left from here once the necessary excavations have taken place but it looks like crossing the drive will be a job for another day.