Not in a physical sense of course but horticulturally so the priority today was to attack the vegetation around the site and a number of volunteers applied themselves to this task. 17 turned up today so there were enough people around to enable some of the usual jobs to take place as well. 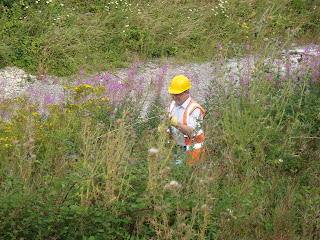 Stuart and Robin spent their day pulling up the nasty stuff and there's plenty of it growing along the cutting sides so much so that's despite their best efforts it's difficult to see where they've been. As can be seen there much to do with weeds already at head height, good job we've not had much rain recently. 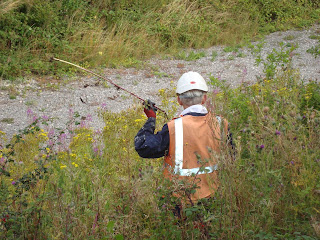 Must ask Robin, in order of magnitude how does this job compare with the thousands of bricks that he cleaned over the last few years. 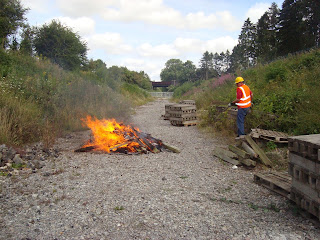 Keith G was also on hand to assist with the disposal of the ragwort which was helped along by a few odd pieces of pretty dry wood from the fence line. There is a plan afoot to re-locate the stacks of S&T troughing, seen on the right of the picture, to the area where they will be used and so free up this stretch of trackbed 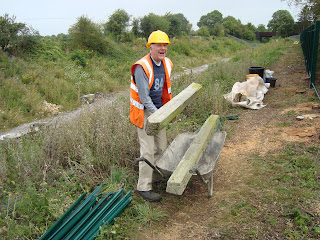 Wood kindly supplied by Vic who was clearing up after the Wednesday fencing crew had done their best or worst, depending on your view. 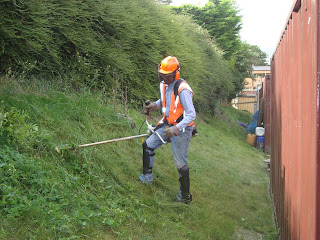 Roger J also joined the merry throng trying to overcome the weeds by strimming grass at the rear of the containers before moving on to the much more difficult sides of the cutting. 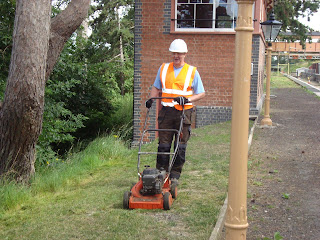 Phil might regret having this photo taken if someone at home gets to see it and asks why he's not mowing the grass at home instead of at Broadway.
It might look like he's going over an area already cleared but in fact he's just pushing the mower to another section of platform that also badly needs his attention. 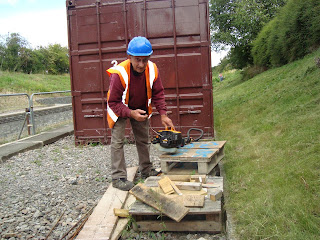 The hard work that the strimmer had been called on to do left it feeling a bit under the weather in the middle of the afternoon. Steve is in the process of investigating the machine's ailment and found that a visit to the repair man was needed. Fortunately the problem turned out to minor rather than the disaster that was feared. 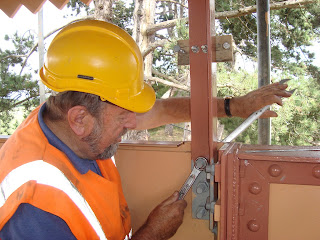 Peter K continued with the replacement of the over length bolts in the footbridge structure and today was the day when the last bolt was changed. Peter is seen here undoing the first of the last set of three. They were replaced one at a time, this seemed a bit safer than the alternative. 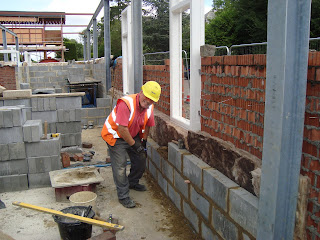 On the station building, Bob J had a day, as rest day relief to Clive, inside the building fitting the insulation material and laying the Celcon blocks. This area is in the vicinity of the station master/ ticket office. 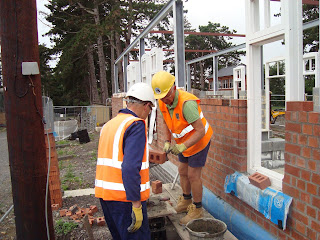 Laying the last course before scaffolding Tony is pointing out to Keith S that the selected brick has a chip on one corner so will not be good enough for this section of wall, it will probably be used later when a smaller brick is needed and it will have the chipped part cut off. Still two more courses to go on the other side to get to the same level. 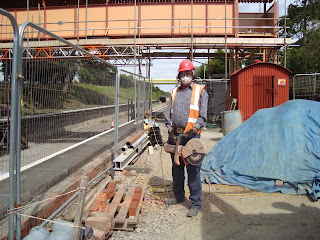 Talking of cutting bricks, a Darth Vader look alike (obviously a bit too hot today for the cloak) popped in for the day to cut a few more bricks with the brick cutter and keep the momentum going on the brickwork. 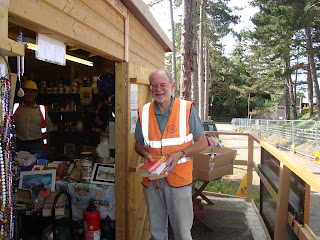 Last but not least the bric-a-brac shed with a rare shot of John B as front of house and Stuart keeping an eye on things inside. The shed fulfils an important function not only to raise small amounts of money but also a point for our visitors to come and have a chat with those working on the project.