28 volunteers turned out throughout the day which, when the early birds arrived, was an overcast morning, eventually the temperature rose into the high 20`s. Good if you didn't have one of the manual jobs.

Down the drive Ian and Martin under the guidance of John C, had the task of installing the ducts for the services to & from the station building, the first picture shows the length of duct that will be installed from the station building down to the road, in the second, Martin checks the positioning of the inspection joint having laid the new ducting up to near the telegraph pole. By the end of the day ducting had been laid almost to the small hut.


Back at the signal box, Graham was giving the two doors another coat of paint, whilst outside Mike gave the area a general clean up and wipe down.


In the afternoon they then both went down to help the team led by Dave B and Terry on the boundary fence installation.

Terry`s turn on the motor auger, then with the iron bar getting the correct depth for the post. when the posts have been fixed. Jo and Graham follow behind fixing the palisade rails then the spears.
By the end of the day the half way point was approaching.

At the station building all the brick laying was on the platform side, the mission to get the brickwork up to a certain height in readiness for the scaffolding arriving in the near future .

By the close of play. 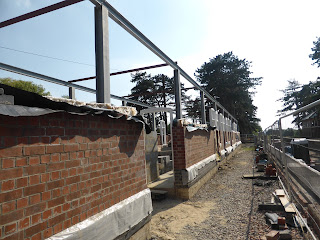 All around the building brickwork is at the same height, the area has been cleared and is now ready for the scaffolding.

At the footbridge Peter Q , Dave H and Brian continued the installation of the cast iron down-pipes on the north side. Brackets had to be made to hold the pipes away from the bridge steel work and keep every thing vertical. Brian is here applying more mastic around the joints to give them a watertight joint.

By late afternoon we had both of the drops on the north side down to almost ground level, some temporary flexible pipe work was fitted to take the water away from the base of the towers until the permanent drainage pipes are installed and then everything can be connected up permanently.
Finishing of the down pipes on the north side also means the scaffolding can be taken down, on  the next blog we should have pictures showing the down pipes, which due to the scaffolding being in the way I was unable to take any decent photos.

Next time the challenge is the south side down pipes!!

Posted by David Holdsworth at 09:14