Getting our ducts in a row

15 volunteers made the best of things today, the weather was a bit temperamental but not bad enough for long enough to force anyone inside. What a difference from last Wednesday!

The footbridge was one area where work continued unabated although the rain could be considered to have been an advantage, at least the crew could see that the rainwater was taking the route that was intended or was that just a stroke of good fortune that that it came out of the bottom of the down pipe (that should get some comments on Wednesday)!

But before the rainwater could find its way down from the footbridge roof the gang needed to have a "huddle" to come up with a viable plan to route the downpipe away from the guttering and avoid the area where the future staircases will be sited, an additional problem to consider was the weight of the downpipes. Whatever was holding it in place had to be of sufficient strength to hold it all up there. 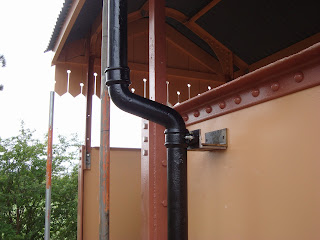 This is the solution the crew came up with, two fairly substantial pieces of angle iron bolted together to form a "U" shaped bracket. The bracket was rotated through 180 deg. before actually being attached to the bridge as this was thought to be the best way of deterring surplus water from sitting in it. 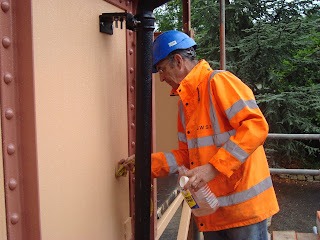 Both sides of the bridge were similarly treated and Roger drew the short straw in being given the job of painting the new brackets without getting any black paint on the bridge sides. The bottle of spirit testifies that this ambition didn't quite work out. More work is needed to fix the downpipes lower down the structure but this will be for another day. 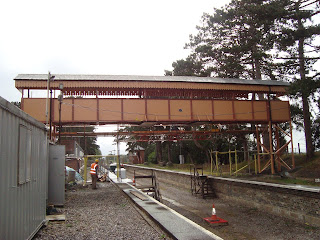 All in place on the north side of the bridge and this allowed the scaffolding company to come in during the morning and remove another section of it.

Meanwhile, down the drive 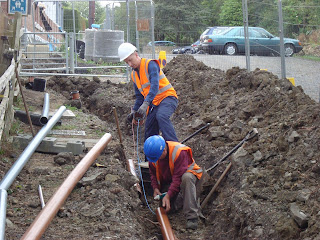 Graham, who looks like he's pushing against Steve's back, and Steve are fitting one of the last sections of ducting for the electrical supply to the driveway lamp posts. The grey ducting is that which was supplied by BT to enable their wires to go underground, instead the pole route, up the drive. That way we/they can remove the problem telephone pole by the station building. 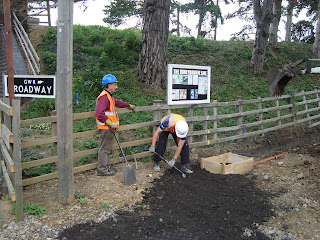 At the bottom of the drive things had progressed to such an extent that backfilling could start. We have had a few lorry loads of used ballast delivered to Broadway recently and some of this was used around the sewer manhole cover and the adjacent trench to bring it up to roadway level. 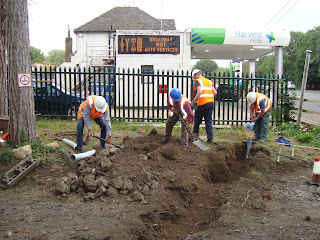 This photo may become a collectors item! The man on the left of this shot happens to be the BAG chairman who is rarely seen with a shovel in his hands so anyone wanting a copy of shot this please apply through the usual channels.
Roger, Steve, Graham and Peter (out of shot) are back filling the trench carrying the bottom end of the newly installed BT ducting and John C is making sure that the pull string is in order. The ducting comes out on the eastern side of the drive close to the road and next to a position suitable for a new telephone pole to be planted. The telephone wires will come on site overhead to the new pole, down the pole and up the drive underground to a second new pole near the top of the drive but away from the railway buildings. 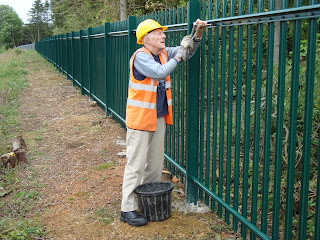 Moving to the security fencing, Vic is tightening the last of the shear nuts from the latest section installed. After this he spent a couple of hours taking out the remainder of the ragwort on the eastern side of the cutting. The modus operandi according to Vic was that smaller weeds were pulled out by hand and the larger ones were loosened with a fork before being extracted. All the ragwort was burnt and thankfully the problem is not so severe on the other side of the cutting. The removal of the ragwort was a thankless task and Vic, Peter K, Robin, Keith and anyone else who helped have done a magnificent job in removing it all. 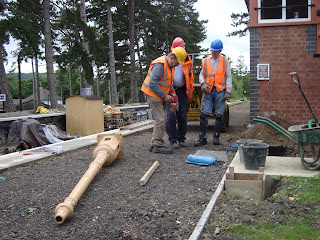 Peter K, Jo and Roger J joined forces to plant the remaining genuine GWR lamp post at the northern side of the signal box. As usual a little conference was held to determine the best way forward and to decide if it could be achieved without any mechanical aid. The wheelbarrow was, expectantly, full of dry mix concrete with two buckets full of water waiting to moisten the mix when the time came. 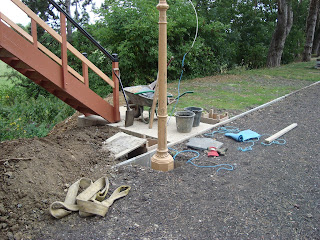 It turns out that four people were able to manhandle the post into the upright position in the hole. Once it had been positioned squarely to the hole two could lift the lighter end while two more were able to guide the heavy end over the edge and in to the hole with the aid of the straps through the slots in the base. After spending a little time getting the post upright the slots were masked off and the hole filled with the concrete. 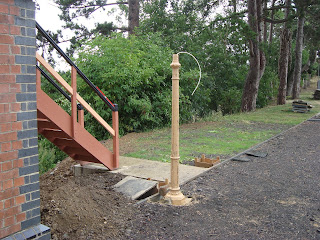 Looking neat and tidy, the electrical cable was fed through and we did toy with the idea of fitting the top but with the gusty wind prevailing it was decided to wait for another day because the lamp tops are fairly light and are easily damaged by a gust of wind as we have found out during previous attempts to fit the tops.
Posted by Unknown at 12:07