The Broadway volunteers must have been making the most of the Bank Holiday this weekend because only 8 were there first thing and that number had dwindled to 5 by lunchtime. A further issue was that the heavens opened at around 1:30 with thunder and lightening and a torrent of water down the drive.

With the limited numbers only three jobs were attempted 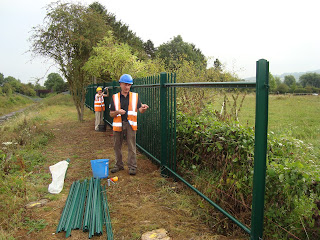 Vic and Steve spent a couple of hours catching up with Wednesday's gang on the fencing, Steve leading by fixing the railings in place and Vic following on tightening the shear nuts. This is as far as we can go at the moment, there will be a slight delay in the proceedings while we wait for the next delivery of components. 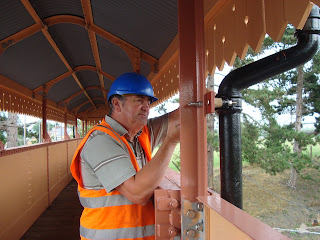 Downpipe Dave, assisted by Brian, had a morning of checking and tightening the bolts holding the pipework in place to ensure the all was sound before the expected removal of the remaining scaffolding on Wednesday.

The erection of the other scaffolding around the station was finished off yesterday and now looks like this... 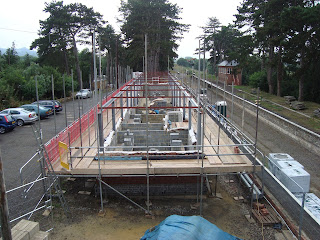 Robin, Peter and John made a start on loading the scaffolding with the bricks needed to start laying on this section on Wednesday next. 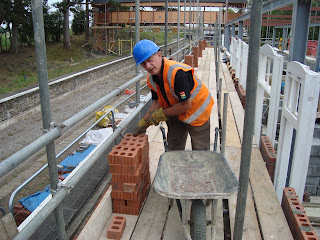 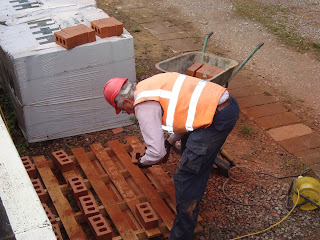 Steve joined in as soon as the fencing work had dried up.

Jo continued with the task of cutting bricks into the various sizes needed to continue construction. The batch being laid out are to cut snap headers.


This was pretty much the end of proceedings for today, the only time that anyone emerged from the messroom after lunch was to make a dash for their car!