Finishing off a few jobs

24 volunteers reported for duty on a warm summers day. Various tasks were on-going. There were some that were coming to an end,  some were changing but staying roughly the same and some are only nearly half way through.

Firstly the job that was changing, mainly going up in the world.

Last week I said that the brick layers had reached a height that could no longer be worked at and scaffolding would now be required.


So today we had the delivery and then the erection of most of the scaffolding around the building, another half day will se it finished. This will allow the bricklayers to continue for another 3 to 4 feet. All that is now required on the next volunteers working day is the lifting of many bricks onto the new working platform! 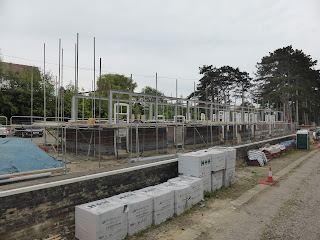 A view of the station building from underneath the footbridge showing its surrounding scaffolding. 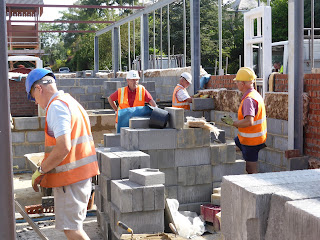 As the bricklayers were unable to work on the outside they moved to the inside to help Clive with the internal block laying. Here John S and Tony are being interrupted? by Paul, who keeps them steadily supplied with mortar throughout the day.

Another on-going project is the fence line on top of the east side of the cutting, 5 volunteers made steady progress today nearing half way (they can't or won't tell me where half way is but they can't be far off now). Unfortunately they have finished the first delivery batch of fencing so a wait until more is delivered.

At the bottom of the drive the duct for the BT Services had been installed into the trench, this will eventually replace the BT pole that is at the moment standing outside the station building.

With all the ducts in place infilling could then be started with the excess soil taken to the side of the signal box to build up the bank around the stairs.

Back at the footbridge one job is coming to a close. Once the cast iron down pipes have been installed the scaffolding on the south side will be taken down. Until we have sufficient funding the stairs will have to wait for another day. Looking back it was only in April when the towers for the footbridge first went up. And in those 5 months!!!! 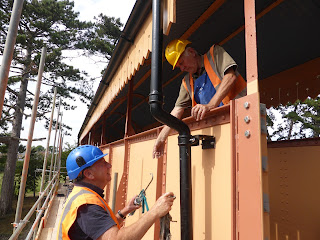 Pete's turn to put to finishing touches of mastic around the top off the pipes, Brian holds our excess mastic rag, by the end of the day our hands matched the rag. The first drop pipe
completed and sealed they moved on to the pipe work below. 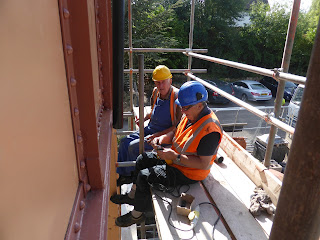 A nice sit down job in the sun you might think but it was not easy drilling through the steel legs. Brian inserting the pilot drill ready for Peter Q and after several drill bit changes the hole is large enough for the bolts to take the bracketed pipes. Dave H, with assistance, bolts it all together and the team move onto a lower hole.


Above shows the almost finished down pipes, the north side has a temporary black tube to take the rainwater away from the base of the tower. The south side is also almost there. Hidden behind the scaffolding is a dog leg which will take the pipe work down underneath the future stairs and into the drainage pipes. Scaffolding is due to removed next Wednesday, so just one more day to check that everything is masticed  and tightened up.

Around the site today the were a few odd jobs happening .

One was Mike checking roofs of the temporary buildings. First was the fencing storage tent/ hut roof. after re-stapling several sections due to wind damage he and Chris then moved over to the dumper shed to make some running repairs. 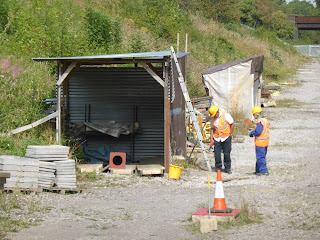 Another job was the endless maintenance of equipment, here Pat is having a rest after trying to sort out a temperamental lawn mower which runs for a few seconds that decides to stop! 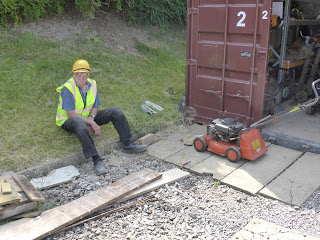 Every so often we get get visitors from other departments of the GWSR today it was Andy from P-Way. P-Way means tracks doesn't it ? 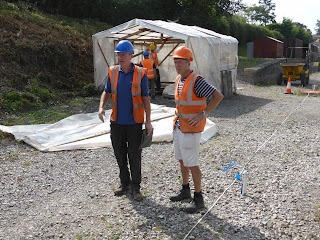 Not today, Andy and Gordon were checking where the tracks will eventually be aligned but it was for the purpose of S & T, who need to know where they are going to one day install their signals.

Posted by David Holdsworth at 10:38