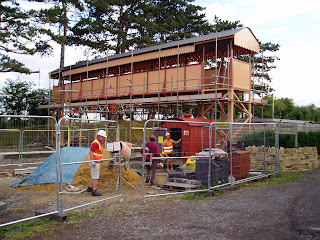 On arrival this morning it was good to see the footbridge with the top scaffolding removed. It is now more apparent what a fantastic job has been done on the restoration. The gaps in the dagger boards at each end is where the steps will eventually be fitted. In the foreground Paul and Tony are setting up   the mixer for the days work. Steve is just arriving to start; it is just before eight of the forenoon. 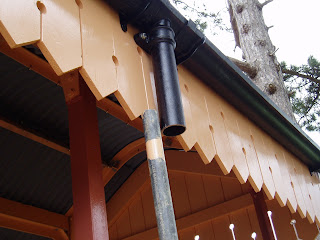 The main work on the footbridge today was the installation on the downpipes, an awkward job that caused Peter Q and Dave a lot of head scratching. A swan neck will be added to this short down pipe to take it back to the main steelwork and down to the drain which will be fitted at the bottom of the tower. 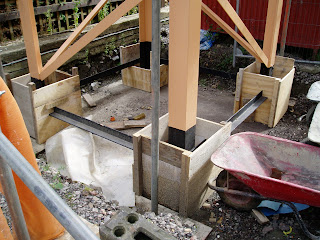 The other job on the footbridge tackled by Peter, Dave and Brian was the manufacture and fitting of shuttering ready for concrete pour to finish off the towers. 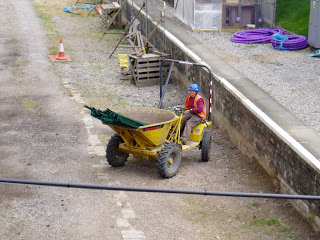 From the footbridge I spotted Steve about to pick up two 25 litre barrels of water, which along with the fencing already loaded is being taken to the steps for carrying to the fencing site at the far end of the cutting. It reminded me of where I should be. 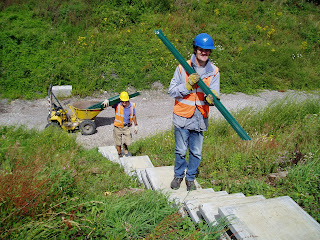 Dave and Brian, part of the team carrying the fencing material up the twenty seven steps on the way to the end of the new fence which is getting slowly closer.


Terry and Dave B having just concreted the latest upright are checking that it is still upright. Steve in the background is fitting the palisades in one of the panels erected earlier. A good thing with the postcrete is that it sets within fifteen to twenty minutes. 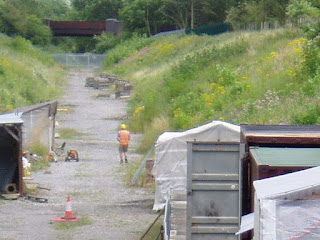 A shot from the footbridge, much foreshortened by the zoom shows the progress of the fencing at the top of the cutting. 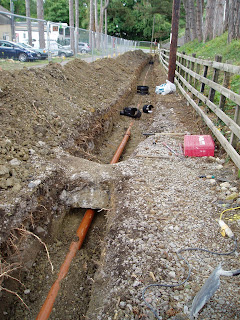 Down the drive the sewer pipe is progressing well, luckily it was possible to tunnel under this block of concrete. You can see further down where inspection chambers are being fitted. 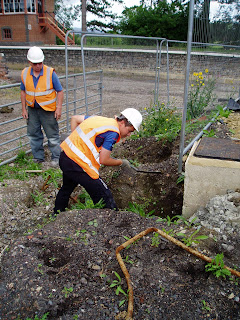 At the top of the drive Peter is hand digging where the new pipe will enter  the manhole built earlier to connect all the drainage from the station. John C is eyeing up where he can bring the trench across our vehicular access to the site. It will entail removing the gate behind him until the trench is back filled. 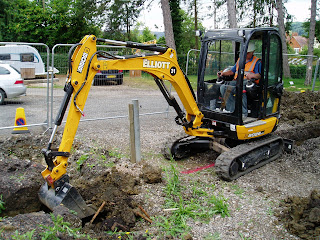 Route sorted and gate removed John C, back in his favourite peace of kit, a replacement for the poorly one, swiftly digs the trench to join up with the one behind him. 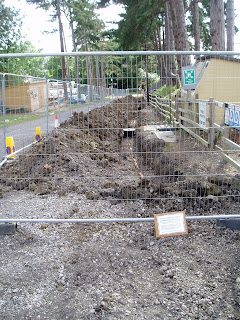 At the days end the pipe is connected, the trench back filled across the entrance and the gate refitted so the site could be secured. Down the drive the sewer pipe is surrounded by pea gravel and the next job is to place the ducting for the drive lighting and BT's services. 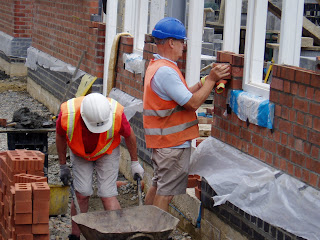 On the main building John S carries on with the brickwork on the platform side. A slow section with all the detail bricks around the windows to be laid. Paul bringing further supplies. 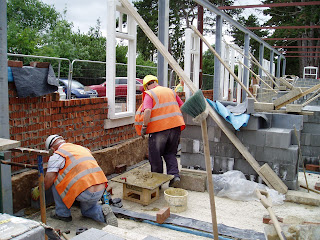 Inside Clive and Bob carry on with the block work whilst Bob W and Tony the brickwork on the drive side of the building. 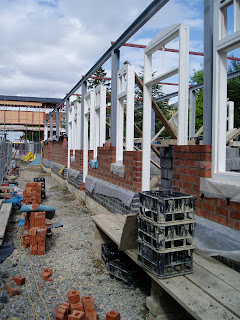 The platform side at the end of the day, looking good now all the windows are in place. 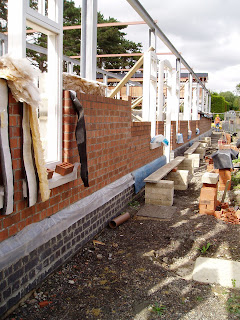 Likewise the drive side showing good progress. Just the high level windows to be fitted into position in the toilet area. 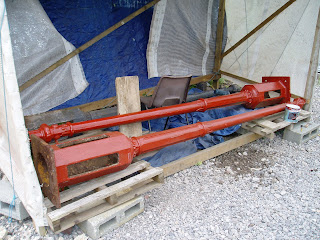 Other jobs tackled today by the 24 volunteers on site included the cleaning off and priming of these two lamp posts by Roger and Jo. Removal of more ragwort, grass cutting and site maintenance.