Thin on the ground

The title applies to volunteers and photos.

Only a few of us were able to make it today maybe the others were at Toddington enjoying the Railway's diesel gala which is running this weekend. However those that were there pressed on.

Photos are a little scarce also, the main photo taker has been unable to send them through to the blogger so will have to rely on the occasional one taken yesterday but its enough to give the gist of what we did.

At the top of the cutting. 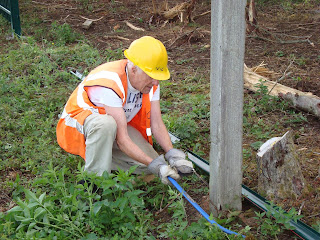 Vic had the rather difficult job of cutting down one of the old fence posts at ground level. We would normally use a chainsaw to do this job but the chainsaw in use up until now has given up and opted for a well earned retirement so while a replacement is on order its down to the old fashioned method. Well done Vic, that job didn't seem much like fun! 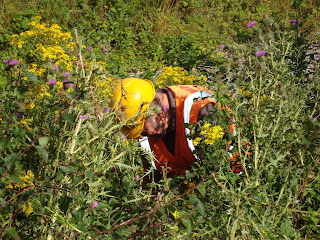 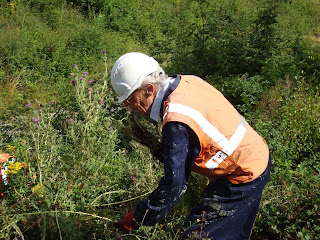 Peter K and Robin had the other gruelling job of keeping the ragwort under control, there is a heck of a lot of it on the sides of these cuttings and as it is situated on a slope keeping a foothold and not slipping down to track level while trying to pull it up roots and all is incredibly difficult.

All of the ragwort that was pulled up today was burnt before the end of the afternoon.

Down at the construction site.. 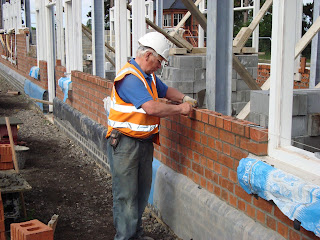 Unusually for recent weeks, John C had some time bricklaying with Tony and John S, the reason for this forced secondment was another mechanical problem. Up until Wednesday John C had been excavating the trench in the drive for the sewer and ducting but the hired in excavator had expired on the job on Wednesday and while a replacement was soon delivered it took the mechanic until mid morning today to repair it enough to move it away from the trench. Unfortunately photos of the continued trenching are proving to be elusive at the moment. 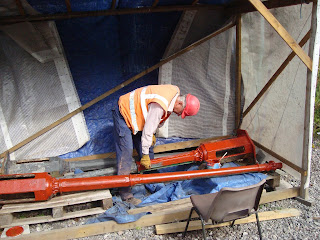 Jo, when not cutting bricks, continued to prepare the three GWR type 2 lamp posts for erection in the drive. After much chipping, needle gunning and brushing they were fit for the first coat of primer. Peter K came along later to give some advice and assistance.

Lots of visitors today, interesting people to talk to, an offer of a signal finial by Derek thanks Derek, the team in the bric a brac shop did well so all in all a good day despite the few volunteers.
Posted by Unknown at 11:42