Another quiet Saturday with only 11 volunteers available. Unfortunately no bricklayers this week, so no photos of construction, but other important tasks were progressed.

One of these was the footbridge 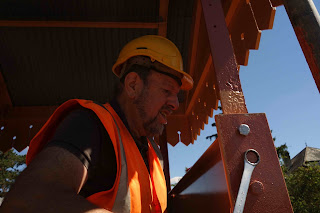 During assembly of the bridge a number of bolts were used that were not of an ideal length that is to say they were too long. Peter K spent the day replacing these bolts with some of the correct length. 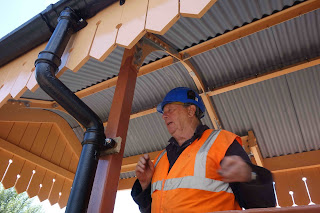 Brian, Dave and Peter Q were busy on the downpipes for the guttering. These pipes need to be installed before the rest of the scaffolding can be dismantled but although it looks as if its completed there is a small delay while some additional brackets are manufactured. As can be seen the painters will be returning a some time, probably on a wet day, to finish the inside framework and the underside of the roof. 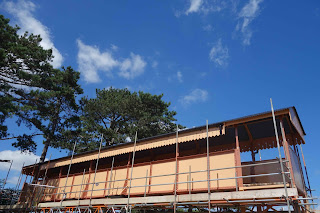 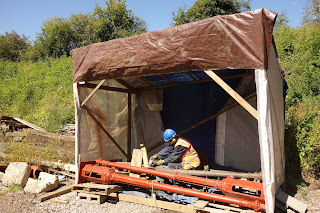 Roger continued with the striping and priming of the lamp posts for the area of the station drive opposite the station. These posts will soon be ready to go in as its probably easier to paint the top coats when the post is vertical.

Peter and Keith did some prep work around the station building getting ready for the next bricklaying session but the other main area of activity was the new fence. 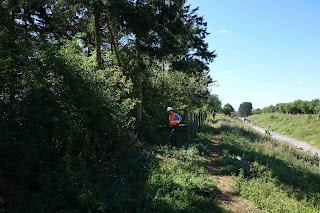 After their efforts around the station building Peter and Keith moved along to the site of the fence line to help Phil, Steve and Robin bring the next batch of components, enough for eighteen panels, up to the top of the cutting ready for when the fencing crew return on Wednesday. The good thing is the fence is slowly approaching the area where the fencing bits are stored so the job becomes a bit less onerous each time. 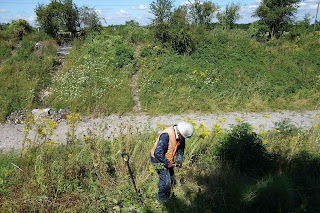 The day job for Robin, after helping with the fence, was the difficult one down on the cutting side pulling up the ragwort. Is there a lot more of it this year or is that just an illusion? It seems never ending at Broadway. 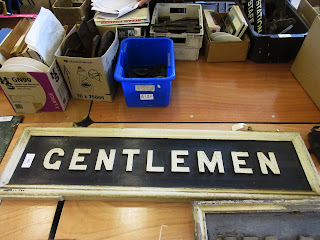 A couple of us went to the Bloxham auction to acquire some signs for Broadway station building and also to meet some old acquaintances and catch up on the gossip. There were a fair number of useful and interesting signs for sale but we limited ourselves to the "GENTLEMEN" sign seen above, which is in excellent condition, and a "WAY OUT" sign which can just be seen poking itself in the bottom right corner of the photo.