21 volunteers signed in today, must be near record for a Saturday, and many hands were needed on the new fence that is being erected north of the station. 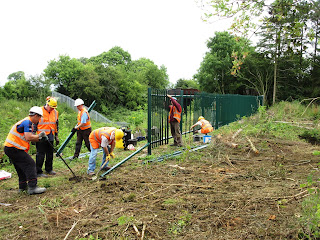 Pete, Pat and Stuart are busy removing a stump that is in the way of the fence line, there will be a few more of these before they're finished. Phil is moving components around while Steve and Vic are bolting the kit together. 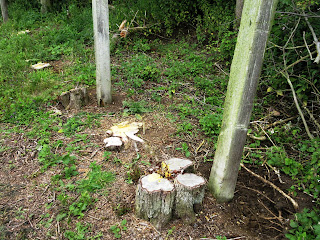 Many of these stumps stand in the way of progress on the fencing and will take some getting out.


Tony was the lone bricklayer today but was able to build the drive side of the building up to the top of the plinths before moving inside to help Clive with the blockwork. 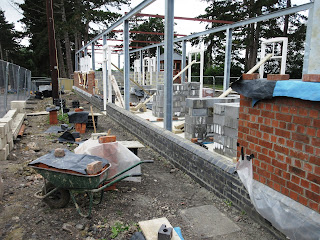 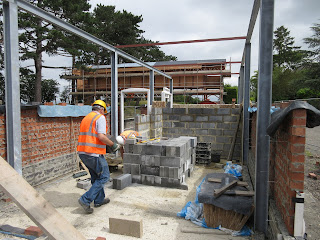 Keith G & Keith S were kept busy transferring blocks form where they are currently stored on the trackbed to where they are needed, in this instance into the ladies loo. Clive was building up this section with the help, later, of Tony. 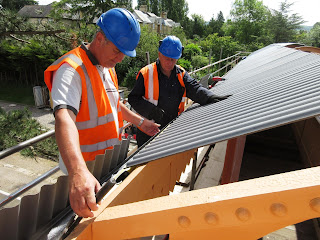 Dave and Brian continued the good work on the footbridge roof by fitting some more corrugated panels, Graham and Mike were also on hand to progress the painting of them. 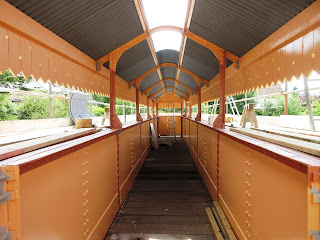 Obviously a warm day as they needed the sunroof open but as you can see they've all done a brilliant job, it looks absolutely splendid doesn't it. 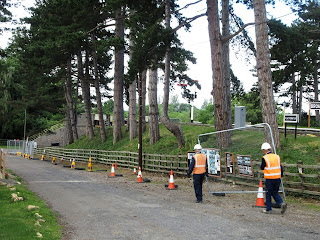 Looks like Robin has brought his twin along to help with the moving of the Heras fencing but its actually Keith S. The section of the drive is being cordoned off to allow work to start on the trench which will take the sewer pipe and two or three ducting pipes for various cable to run along the drive. 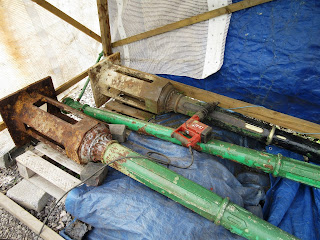 The three GWR type 2 lamp posts that we acquired a few months ago are ready for needle gunning now that they are sheltered accommodation courtesy of the Carpentry Dept. Lamppost Jo is the one entrusted with this task and the subsequent painting when the time comes. 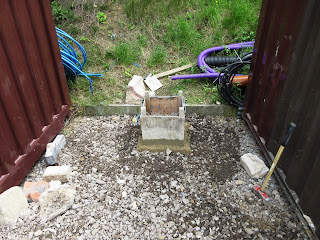 One more lamp post has been completed by Jo and his team just in time for the first lamp post casting of the new batch which has been promised for delivery to Broadway this coming Wednesday, watch this space!
Posted by Unknown at 07:59