It was a Hot Day at the Office.

28 volunteers turned out today which was probably the hottest day of the year so far, much sweat was seen on the brows of most and much fluid was liberally taken to keep refreshed and cool.

On walking around the Broadway station site doing my blogging duties I had noticed a difference in temperature in the various areas where the 4 main groups of volunteers were working.

Down at the drive. 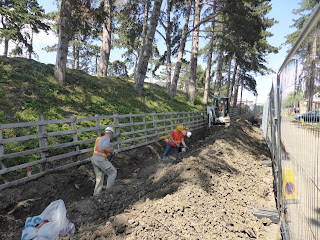 Because of the embankment next to the drive the southerly breeze from across the fields fails to reach the group digging the trench for the services. John C in the mini digger, digging the trench out to install the new sewer pipe. Then Terry, Ron and young Pete are seen filling over the top of the newly installed main sewer pipe now extending from the new manhole heading up to the station.
The sun had shone down on them in the morning but in the afternoon they had the dappled shade from trees but it was a hot job for most of the day.
Further up on the left is the Broadway Goods Shed, Julie even with her trusty fan going all day she still looked hot and bothered, the sun had shone on the shed most of the day .

At the station building. 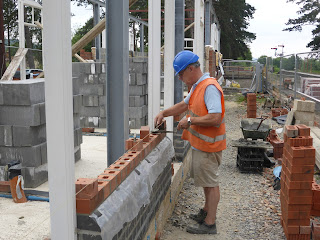 The sun rises to the car park side first and eventually later in the day John's legs will see the sun, the station building usually has a nice breeze or wind coming from the direction of the distant (home) signal so its usually a pleasant working area. Bob and Tony had started the reds on the car park side whilst John started the reds on the platform side. And as per norm Clive was inside continuing the internal block work.

Back on the Footbridge


Here Jo is seen putting the finishing touches to the bridge's engineers manufacture's plate. Jo had had two cast from an original plate. He then painted and varnished them and with the help of Dave H installed them on the centre panels on both sides of the footbridge.

The footbridge was one of those strange areas to work weather wise today, there was sometimes a breeze and then a warm wind and then with no wind we had a radiated heat blast of the newly bitumen painted roof panels. 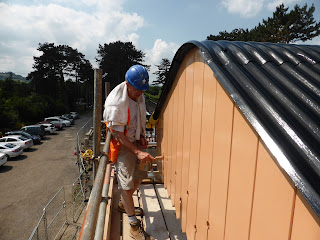 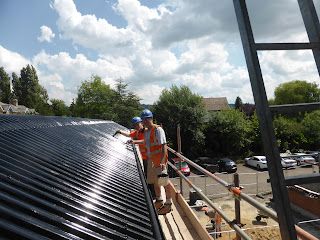 Graham seen above giving the gable end an additional coat of paint and then with the help of Mike he is seen applying the  second coat of bitumen.

Today was also the topping out of the roof for the footbridge. Below, Michael is just about to  bolt down the last roofing panel, hiding from view and underneath Brian is holding the last hook bolt in position waiting for the washer and nut to be attached.
Later in the day John B came to inspect the work and suggested some strengthening requirements which will be attended to on Saturday. Then as they say "our work here is done" 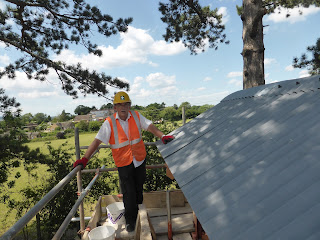 Below at the end of the day the bridge with all the roofing panels on, all which had had at least one coat of Bitumen. Also, the web cam has had to be removed to a temporary position, so Graham and Mike could give the smoke deflectors a coat of primer and 1st coat. This is why if you look at the blog site a different image will be posted temporarily until the camera is allowed back to its original position. 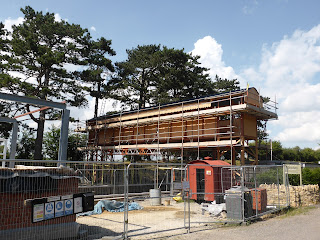 At the end of the platforms to the north is an area where the home made storage/container units are positioned. The first on the right is where the new fencing is being stored. The opposite side in the dumper and vibrating roller shelter, to the rear is the wood storage shed and a bit further down is Jo's lamp renovation shed .
This area without a breeze was in fact the hottest part of the station site, the sun heating up the ballast making it and unpleasant spot,
In fact the only time people that were working in this area were when they collected additional parts for the fence installation from its storage area.

Down at the fence line

The area on the top of the cutting to the north east was another quite a hot and dry spot but it benefited from the wind coming down the cutting, a team led by Vic and Rod on mechanical auger carried on regardless. Posts, spears, the post cement, water and all the tools had to be manhandled from the top of the steps yet again to the work place but every working day the distance gets shorter. By the end of day 17 fence panels had been completed since last Wednesday.

Above we see Rod on the auger drilling another post hole, Keith cutting the roots the auger fails to deal with and Pete with an upright post ready to measure the correct depth before the post cement is
tipped in. 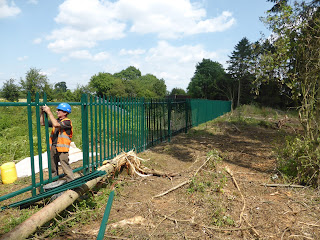 Steve B follows behind fitting the spears as soon as the posts are solid in the ground.

Jo had previously sourced a genuine GWR platform lamp post and this was then sent to the foundry to have a pattern made. A new post was then cast from this pattern. 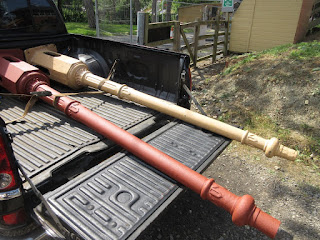 Here is the first trial casting being delivered, a few corrections need to be made before we order sufficient replica lamp posts for the whole station.

On the whole it was a hot day, but at least it didn't rain for a change !

Posted by David Holdsworth at 10:24