22 volunteers on site at various times today to indulge in another session of sweat and toil but as usual a lot was achieved.

To start with the footbridge, Brian, Dave, Graham & Mike made a concerted effort to bring work on the main span close to completion because it is planned to remove the scaffolding towards the end of next week

The section of the corrugated roof above the junction with the staircases was considered to be vulnerable to any adverse weather that might occur between now and the time when the staircases have been manufactured and fitted. 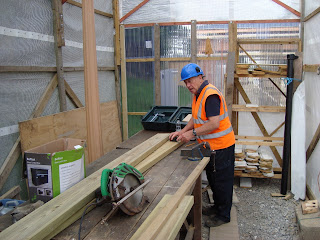 Two additional wooden bearers have had to be manufactured to provide the required support. One was needed for each end of the bridge and Brian, with later help from Dave, was preparing to cut a bevel on each of the 6 x 2 planks on the bench. The bevel is to allow the boards to fit snugly up under the roof contour. 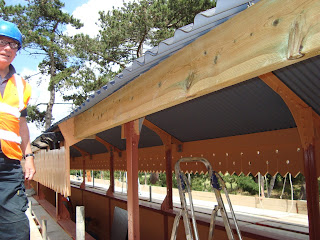 The first board in place, Brian has just stepped back from securing the roof to the board to allow the photo to be taken. 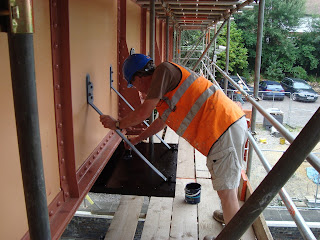 Graham, meanwhile, was painting the smoke deflectors in black to match the condition they will be in once the locomotive start to run underneath them. After painting as much of the deflectors as possible attention turned to touching up a few places that needed another coat of Dark Stone. 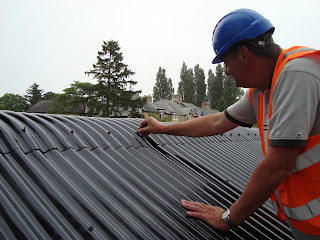 Before joining Brian in the Carpenters shop Dave, with Mike's help on the inside, just checked that the nuts on the ends of the hook bolts on this end of the roof all had washers under them and finish off by pressing a small plastic cover over the protruding nut and bolt.

Weeds along the sides of the cutting to the north have been rampant in the last few weeks and one in particular has demanded that attention is paid to it. 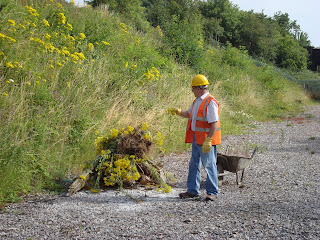 So three volunteers, Stuart, Peter K and Vic spent there time pulling up as much Ragwort as possible. Not a simple job as its not easy clambering up the cutting sides to get to some of the weeds, those that were removed were destroyed by burning later in the day. 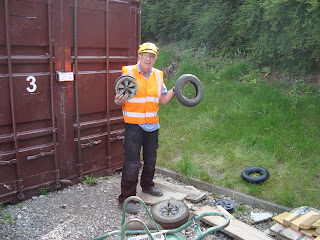 Pat didn't figure on a day of maintenance when he set out from home but needs must as they say so the wheelbarrow fleet had its day in the sun followed by the cement mixer, the barrows seemed to be suffering from flat tyres and squeaking wheels and the mixer was having a little gearbox trouble, both items are obviously vital to the project. 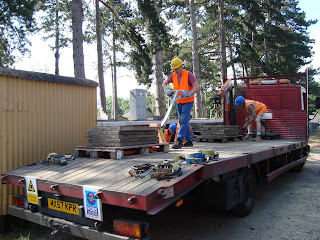 The last of the donated paving slabs were collected by Terry, Paul, Rod and Steve. Paul, aka Tecton Timber Products, very kindly provides the transport. 170 3 x 2 slabs are now on site at Broadway so will go a long way to paving the platform area in front of the building.

The big event of the day on the station building was the positioning of the stone window cills on the middle section on both sides of the building. 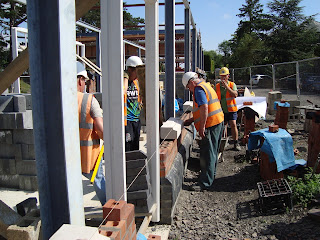 John C is the one with a trowel in his hand while Bob, Peter and Tony wait to offer assistance when necessary. A total of eight cills have been put in place today and after allowing the mortar go off for a while the brickwork was built around them as much as time would allow. 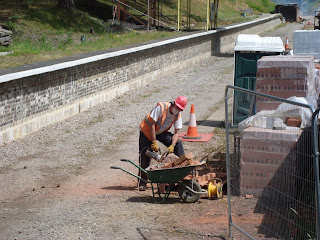 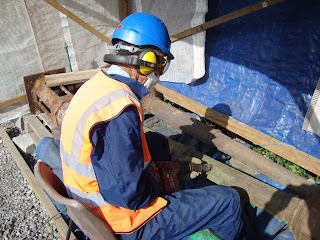 Jo and Roger took turns to work in the recognised hotspot at Broadway, the lamp post shelter. Roger is seen kitted up in the shelter needle gunning another post, needle gunning is used for the final clean up after chipping most of the paint of with a chipping hammer. One post is now ready for priming.
The standby job was cutting more of the hundreds of bricks needed as split headers. 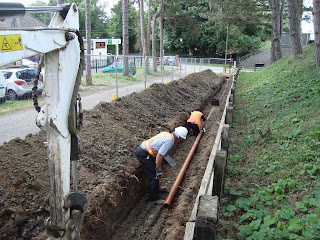 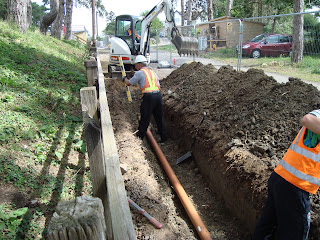 In between a spell on the station fitting window cills John C continued the rather difficult job of digging the trench for the sewer pipe and ducting. Difficult because of the soil conditions, dry and packed very hard by all the traffic up the drive over the years, Ron and Peter are following on after the digger installing the pipes and occasional manhole. The halfway mark has been passed so steady progress is being made.
Posted by Unknown at 23:48