Have you heard the one about the hole...

...the volunteers are looking in to it!

15 volunteers today and the first call on available labour was the foul water installation at the bottom end of the drive. John C assembled a merry bunch of recruits to help fill the hole left from last time. 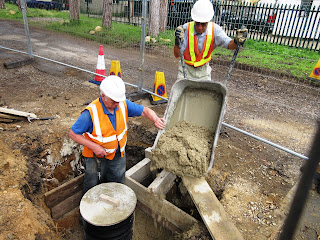 First off, the raising tubes, extending down 6 feet, had to be supported by a ring of concrete up to around 6 inches below surface level. Ron's wheel barrow is being guided by John C as he pours one of many barrow loads into the hole which always seem to take much more concrete to fill than the soil which came out. 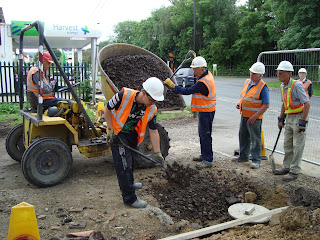 Following the concreting, the surrounding area had to be built up with ballast. Ballast is being delivered by the Jo the Dumper man and carefully distributed by Pete S and Keith S while Robin is lookout and traffic co-ordinator. Unfortunately the actual cast iron manhole cover will have to wait until next time because of a temporary shortage at our supplier.

Which just left the extracted soil to be moved from the site to another area, the last of it is being shovelled up by Ron into the bucket for dropping into the dumper. 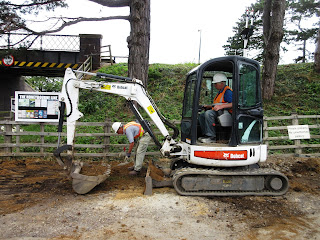 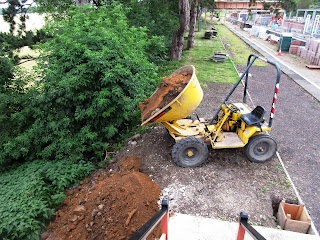 The area around the signal box was the beneficiary of the surplus soil as this was thought to be a little on the low side and gives ample space for the dumper's load. 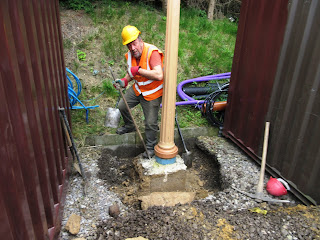 Relieved of his dumper duties Jo teamed up with Peter K to remove one of the last of the old lamp posts from between two of the storage containers at the north end of platform one. Delivery of the replacement posts is delayed but this was accepted when the order was placed to take advantage of the best deal. 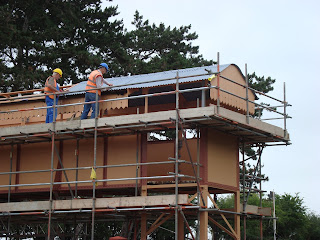 Peter Q had to scout around for an assistant as the usual crew were rumoured to be away chasing steam specials on the national network. Roger J fitted the bill and spent the day helping with the fitting of more corrugated roofing sheets. This was the situation in the early afternoon and a few more were added before time was called. 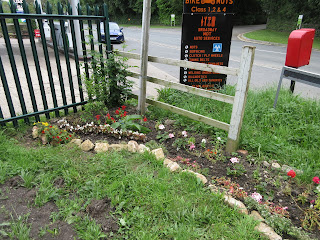 Vic's efforts in the gardening dept are beginning to show some results although as the plants went in the ground later than would be ideal they have a bit of catching up to do.


Turning to the station building... 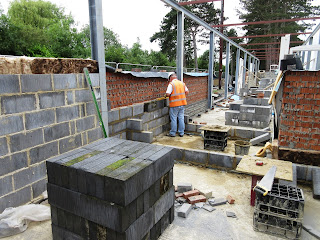 Clive continued to make steady progress on the internal walls, each section of block work improves the feeling of the layout of the building. Clive is currently working on the disabled toilet. 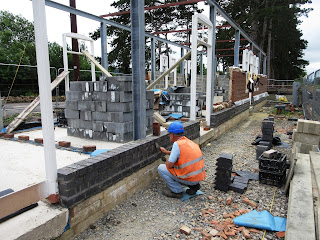 An early rain shower delayed the start but by 8:30 it was dry enough to get cracking, John was able to lay the next course of blue headers on the platform side of the building. As a result of the wet start to the day the mortar took longer than usual, at this time of year, to go "off" so pointing was delayed until the period after lunch. There is one more course of stretchers to go on this elevation before the plinth headers are laid. 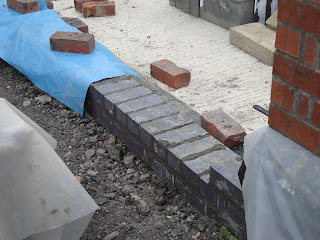 And to finish, one for Bob W. The course on the drive side was run through to the far wall too Bob.