Today seemed a bit low key even though there were 12 volunteers on site, some Saturday regulars were elsewhere doing other things. Those that were there concentrated on four areas of activity.

The footbridge team were busy, as usual, but this time having a break from dagger board production to resuscitate a length of timber that had previously been in use on the Henley in Arden bridge that provided the main span for Broadway. 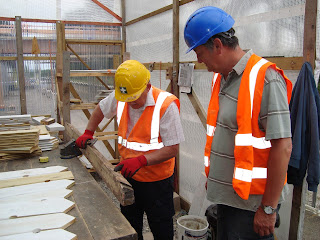 Mike and Dave are trying extract some old nails from the aforementioned timber but even with bits of nail still in there it is in good enough condition to have a second life. This piece of timber sits under the corrugated roof at the point where the roof over the stairs meets the roof over the span. 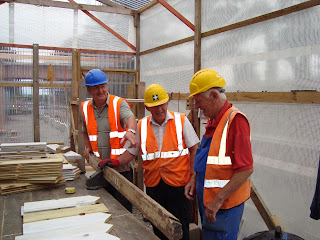 Advice was eventually sought from Peter Q, the leader of the carpentry team, and the "leave it as it is" solution was agreed. There is a similar board for the other side of the bridge. 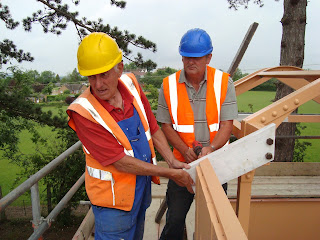 Not a great shot of Pete, unfortunately, but this view gives an idea of where the piece of timber will sit. It is on the steelwork just by Dave's left elbow. The unpainted wood that Pete is holding is a temporary measure, to support the fascias, until the staircases go in. 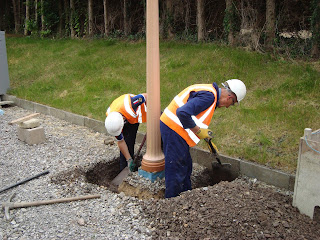 Peter S and Keith made a start on the removal of another corporation lamp post, this one is on the northern end of platform one. The replacement Great Western style posts are getting closer with a tentative promise from the foundry of pattern next week followed by first off casting the week after. 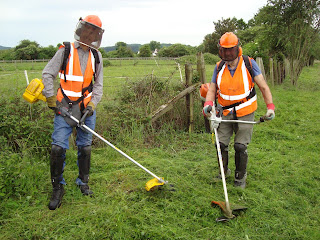 In preparation for the replacement of the fence at the top of the cutting Roger and Peter K spent the day cutting the grass and nettles along the ridge beside the old fence to make access easier when the work starts. 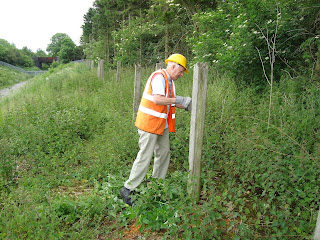 Vic, meanwhile, was working ahead of the strimmers by removing the old strands of wire between the decaying posts. The removal of the wire is necessary to prevent it getting wound up in the strimmers. 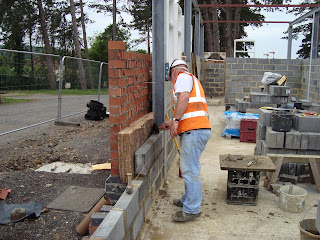 Clive continued with the block laying on the inside of the building almost at the stage where the blocks match the facing bricks on this section. 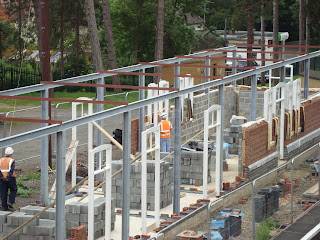 How it looks from the footbridge with Robin, today's mortar mixer, walking towards Clive to ascertain when the next mix will be required. The mortar mixes for the inside and outside differ in colour and runny-ness, for want of a better word. Runny on the inside where the blocks soak up the moisture quickly and slightly coloured on the outside. 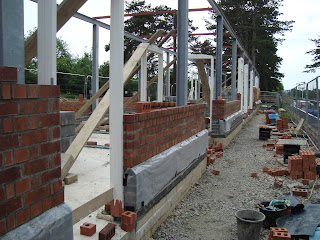 Only one on facing bricks today so progress was fairly slow but this was pretty much the state of play at the end of the day. Your blogger/ bricklayer had to shoot off early to ring some church bells to help celebrate the Queen's 90th birthday so the blog may be a bit low key also..