It Ain't Half Hot Mum 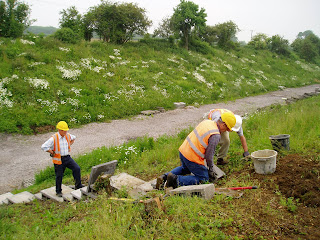 On a very warm morning 27 volunteers turned up for a day at the sauna that was Broadway station. There seemed no air about and everything seemed to take more effort.
The team working on the cutting steps were determined to finish today. Terry and Ron setting the next riser, while Peter takes a breather after heaving a 600mm x 50mm slab up twenty of the completed steps. 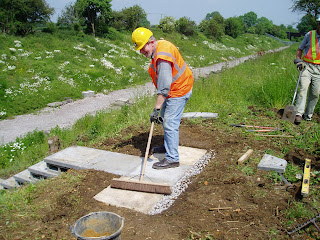 By mid morning the 27 steps and a small landing place have been finished and Rod is sweeping the soil off after the surrounding area had been levelled off. 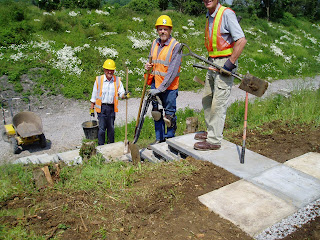 Peter H, Terry and Ron, (apologies for missing head, I blame the sun on the camera screen), pause as the tools are returned to the waiting dumper. 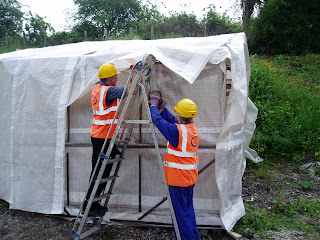 Dave B and Chris set about refixing the sides to the temporary shelter and adding another layer of plastic to the roof. This was to repair damage done whilst moving the structure around the site and included it's alterations for different uses. 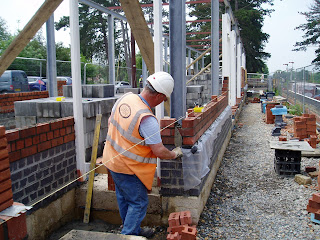 At the station building things were moving on. Bob was working on the entrance area to the toilets. This involved laying the bull nosed corners and the detail bricks around the three door frames, lots of cutting required. Below a closer shot of the complexity of this area. 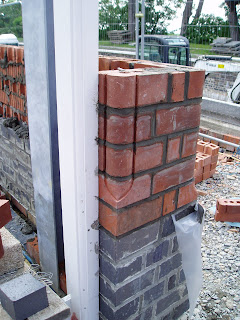 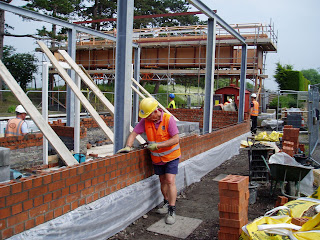 Tony working on the opposite side of the toilet area. A long stretch of plain wall as the only windows in this length will be smaller, obscure glass ones at a higher level. 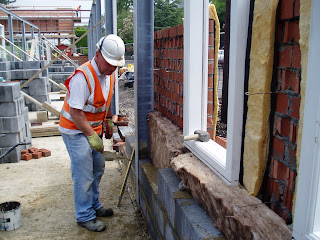 On the inside Clive continues with the block inner wall. Fitting the insulation and bonding the two walls together, with previously fitted ties, as it rises. The picture below shows good progress at the end of the day. 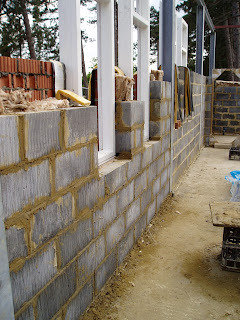 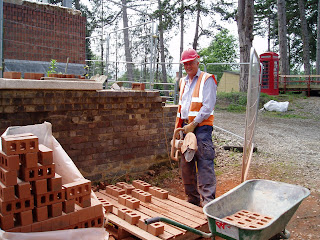 Jo spent a lot of time and got very red cutting several barrow loads of bricks for the brickies. 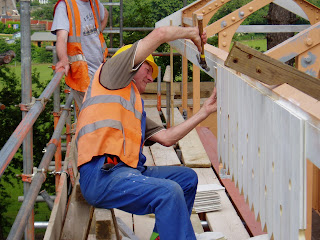 Up on the footbridge Peter Q has started fitting the dagger boards to the southerly side. Carefully tapping, with a block, the T&G joint together before nailing the next one. 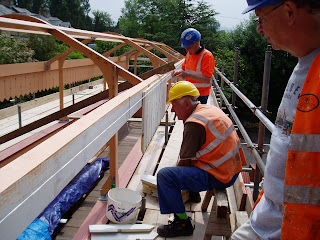 Just checking it's right. Mike is already priming some edges and Graham takes a breather from painting elsewhere. The following picture shows that by the end of the day a lot boards had been fitted and already in undercoat courtesy Graham and Mike. 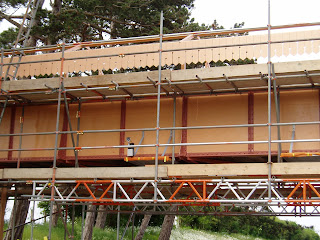 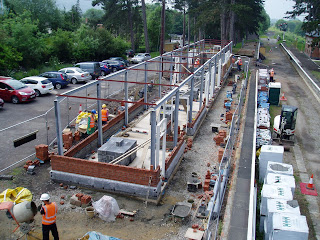 Whilst up on the bridge a vtew of the whole station building site showing the work at the north end. 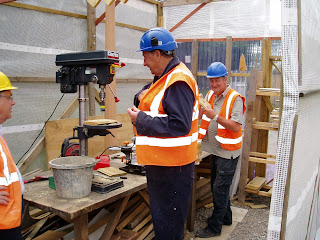 Amazingly, Mike, Brian and Dave can still raise a smile during the ongoing dagger board production. 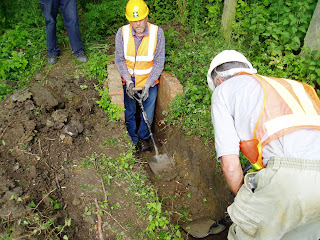 Finally at the northern end of the site Terry, Ron, Peter and Rod started digging out a ditch that collects any excess water at the top of the cutting, on the Broadway side. This drops down to a pipe in the headwall behind Terry, which in turns runs down the side of the cutting to a catchpit by the Springfield Lane bridge. 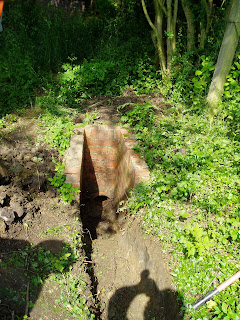 By the end  of the day a good start has been made and the full depth of the pipe exposed.

Again good progress over the whole site on a hot sweaty day. Volunteers weary but happy and many threatening themselves with a cold shower followed by a cold beer.