The Long and The Short and The Tall

Despite the forecast for inclement weather there were 26 volunteers working at Broadway today and good progress was made on several projects.

A start was made last week on the drainage ditch on the top of the cutting at the boundary to our land and also just inside the fencing that separates us from the neighboring land. Permission has been obtained to carry out drainage work here and Rod and Terry set about digging a ditch over two feet deep to connect with the pipe uncovered last week. 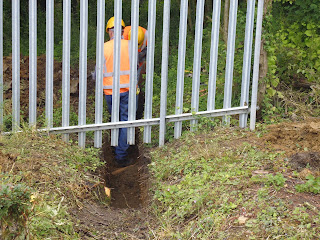 Rod and Terry behind bars at last! - but only for the morning!  A start has also been made on the drainage ditch on  the GWR side of the fence, 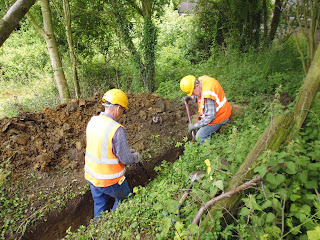 Good progress was made during the morning in digging out the ditch on the adjacent land and by lunch time all was completed. After last weeks very hot weather it was definitely a day for long overalls today, and also to keep the stinging nettles at bay! 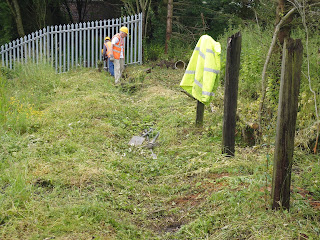 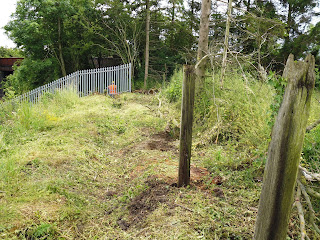 It will be quite a task to get the materials to this part of the GWR land even after using the steps that were completed last week.

Although it was much cooler this week Graham decided the old legs needed another airing! Here he is burning off some paint on timbers from the original Henley - in -Arden footbridge and which are going to be reused at Broadway. 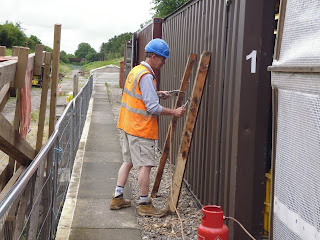 After completing this task Graham continued undercoating the dagger boards on the south side of the footbridge. It is a long old job and the weather did not help today but good progress was made. 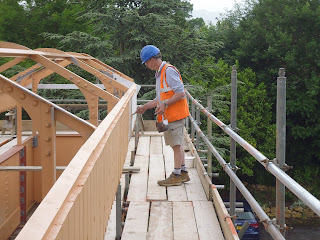 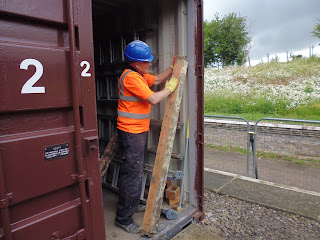 Meanwhile Mike sanded down  the timbers from which  Graham had previously burnt off the old paint. They are in remarkably good condition despite being many years old. 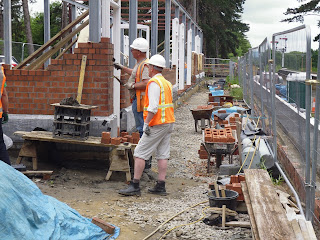 Not to be outdone on the shorts parade Paul, our master cement mixer, is admiring Bob's brickwork on the northern wall of the station building. The corner pillars are now up to the height at which scaffolding will be required. 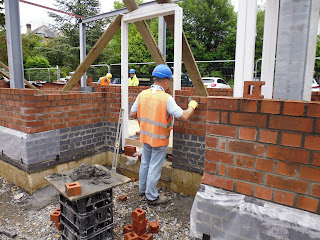 John S is finishing off some of his work on the West (Malvern) side and David is delivering a supply of bricks to Tony working on the East (Cotswold) side. 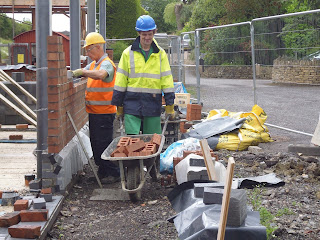 Inside the building Clive continued with the block work and is seen here making a few adjustments to a small block prior to placing it on the mortar. 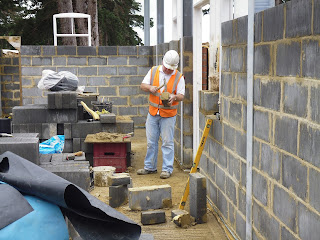 Up on the footbridge much was happening. The day started with a "aerial" site meeting between
John C, Peter Q and Dave H high up on the scaffolding to discuss the correct way to install the cast iron guttering to the facia boards on the north side. 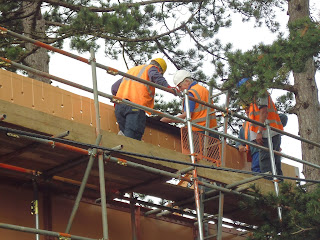 Soon the guttering was in place and all sealed up. It slopes from the centre towards each end where down pipes will be fitted. 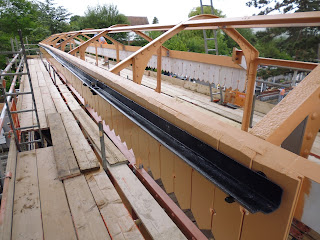 First thing in the morning the final dagger boards were nailed into place, later to be painted by Graham. 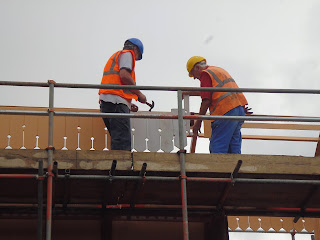 After lunch attention centred on marking out and the cutting dagger boards for the gable end (Cotswold) of the footbridge. The calculations needed were quite complex and required quite a lot of discussion! 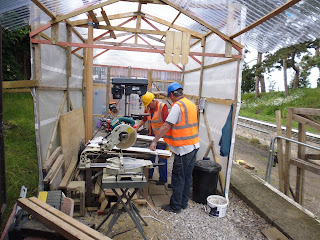 Peter Q, Mike (hidden from camera) and Dave are in deep thought about the best way forward but at the end of the day what a brilliant result! A section had been installed on the gable end and it looked the business. 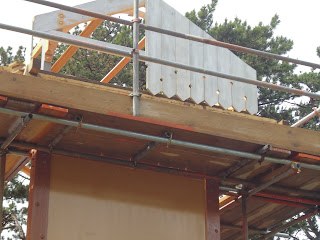 Rod, Terry, Peter H and Martin made a start after lunch in adding infill behind the north end of Platform 2. We were fortunate in having the services of John C and the 360 digger to load the dumper and about 8 loads of ballast were laid by the team and compacted by Terry on the vibrating roller. 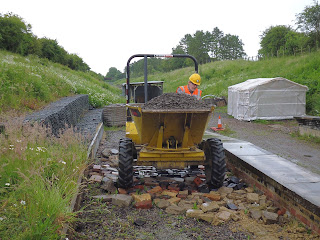 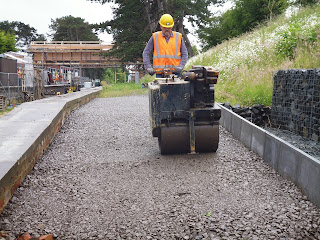 Pat continued with keeping the site neat and tidy with his mower. 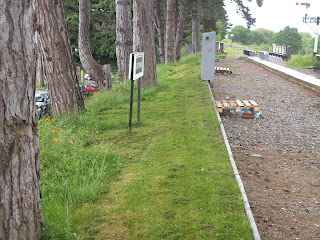 This is a view of platform 1 looking south with the grass edges looking very just as they will be when we are open for business.  The pallets cover the sockets where new lamp posts will be inserted in due course. 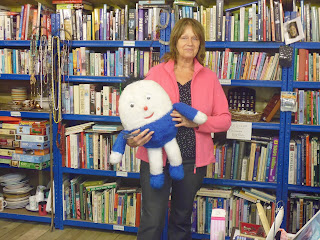 Julie wishes to remind everyone that the sales shed, which raises valuable funds for the Broadway project is open every Wednesday and Saturday from 10 am till 4 pm. Do call in and grab a bargain.
Chris has made a very nice wooden sign for the shed - it is now known as Grannie Arkwright's!

And finally some lovely poppies which have self seeded on the cutting side. 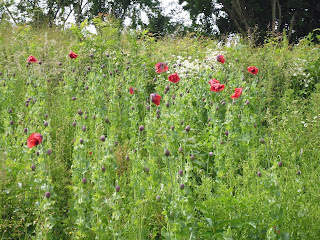 It won't be long now before the roof goes on the footbridge and shortly scaffolding will be erected around the station building. It was a very tall order to get everything up and running by 2018 but we are making great progress towards it.