13 volunteers signed in today to carry out the various tasks that are ongoing at the moment.

Keith and Peter decided to attack a tree stump that must have mysteriously appeared at the top end of the newly installed cutting steps. 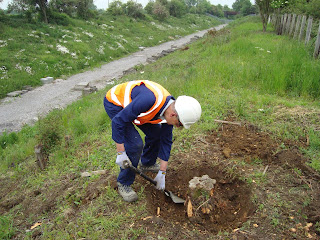 The chosen method to get the better of the stump was to use a mattock, as the persuader, to chop it off below ground level. Keith was busy clearing the soil around stump while Peter was away at the carpenter's workshop putting an edge on the adze after at the first attempt had tended to bounce off the stump. Success came before lunch break. 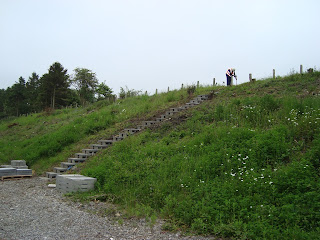 After Wednesday's efforts the steps had nearly reached the top of the cutting, another half day should see it finished, the steps have been cut in on the Cotswold side of the line. Someone was heard to ask if we could have a Stannah stair lift instead! (If Stannah wishes to make a donation to the Broadway cause after this plug it would be gratefully received!) 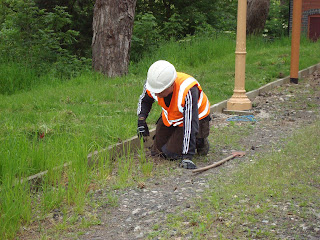 Lucky Phil, found what many people hope for but seldom find these days, a job for life! 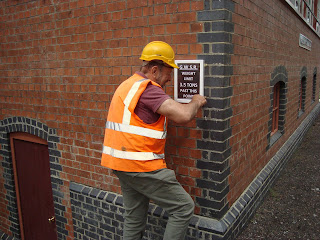 After the battle of the tree stump the Peter was able to complete a long standing job that had been waiting since the completion of the rodding tunnel, fixing in position two signs, one either end of the signal box, giving notice of the weight restriction across the top of the tunnel. 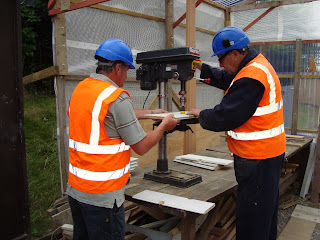 Dave and Brian started on the long process of making the next batch of daggerboards for the footbridge. This starts with the drilling of the holes followed by the cutting of the ends into a "V" shape and finally cutting out the join in the boards up to the hole, a delicate operation with much room for error with mismatched boards which the lads managed to avoid today, at least that's what they said. 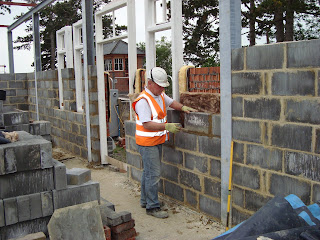 Meanwhile back at the main building, much activity. Clive spent the day laying blocks on the inside taking in three windows and a door frame made this section rather fiddly. Lots of blocks to cut to shape and carefully build in behind RSJs etc. takes a bit of time and patience. Looks good Clive. 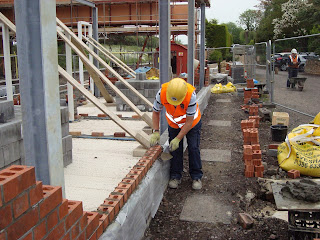 Tony and John made a start on the filling in the sections of wall between the corners, that Bob erected last Saturday, on the Honeybourne end of the building. Ably assisted by..... 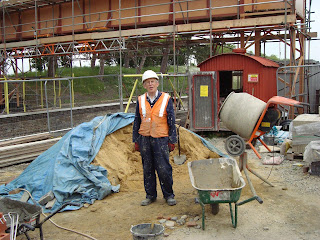 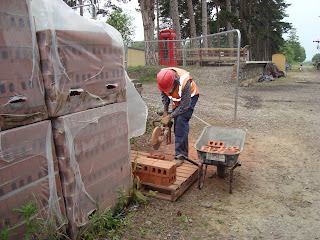 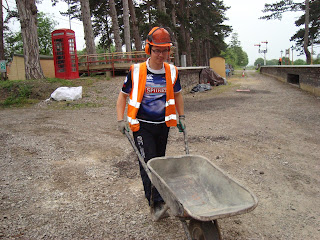 And Peter providing the transport..... 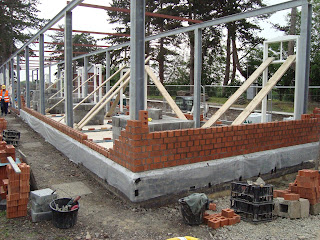 Which all helped us to get this far on the northern end by the close of a day which turned quite warm and humid in the afternoon. 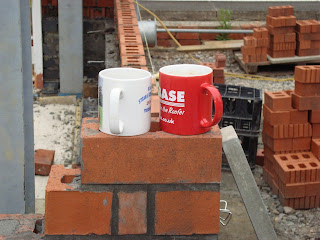 After seeing this you may be forgiven for thinking that those helping the bricklayers kept them well supplied with cups of tea. Nothing could be further from the truth, one particular mortar mixer drifts off at regular intervals to make himself a cuppa and leaves the mugs for someone else to clear up. This little issue might be sorted on Monday! We'll see.