There were 27 Volunteers on site today and enjoyed a mostly dry but overcast day.

As a condition of our planning permission for use of the driveway the original GWR gate posts have to be relocated. At the moment they are in the way of the sight lines required for the exit. The posts have been in place since the station way originally built over 110 years ago and the first post to be tackled was the one to the right of the driveway looking up towards the station building. 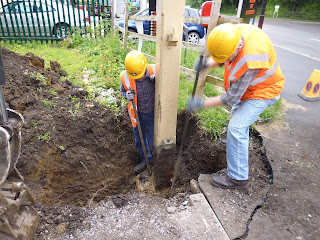 Rod and Terry were given this daunting job and get started by digging away the soil around the post. John C on the mini digger was soon called to help and it was discovered the post had been very well concreted in all those years ago. 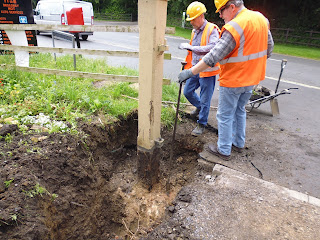 The concrete proved to be extremely hard going so some extra help was bought in in the shape of an electric "pneumatic" drill. 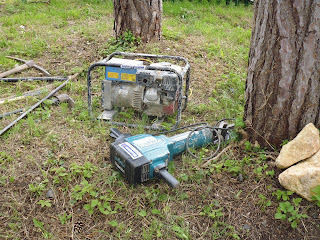 The drill was set to work and after a while, to Rod and Terry's surprise, it was found that the post had been bolted onto a base plate. 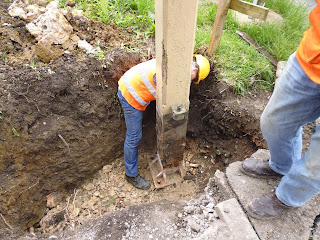 The nuts were released with minimum effort and together with the bolts were in excellent condition, quite incredible after all those years buried in concrete. 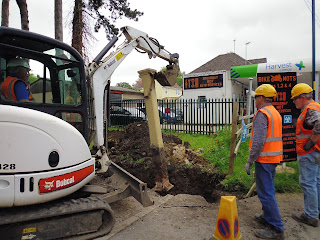 After this success it was over to the second post. Rod is now sizing up the challenge ahead with this one! 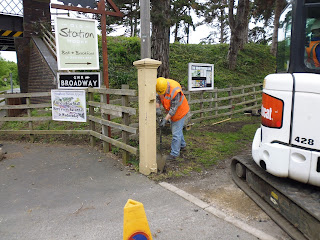 After a great deal of drilling the concrete surrounding the post was slowly removed and to everyone,s surprise it was found this post was not bolted down onto a base plate. This had been broken off; it is thought this happened when the post was hit by a vehicle some years ago. 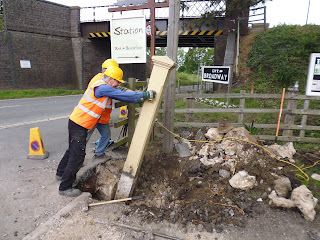 The post is gradually eased  out of it's concrete surround and eventually laid down, 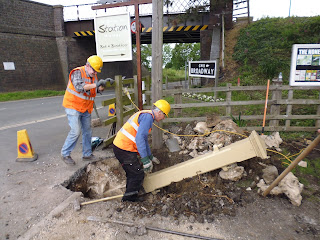 In last Wednesday's blog your author, to his everlasting shame, wrongly named Julie's bric-a brac shed and he is pleased to now put the record straight! Chis's excellent sign is below showing the correct name! 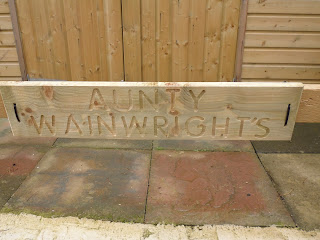 Julie has just about forgiven him but perhaps it would have been better and taken a "leaf" out of Paul's book and said it with flowers! 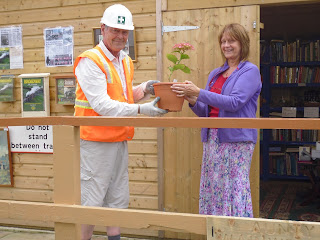 Paul, ever the romantic, presents Julie with a pot plant grown in his garden and for sale in Aunty Wainwright's.

Julie has an excellent number of pictures and prints for sale and one particular picture is of considerable interest. It has been authenticated and signed by the artist - Donald Ayres.

It is a picture  of the 1960's entitled "On the River Medway Estuary, River Medway, Isle of Sheppy, Kent". 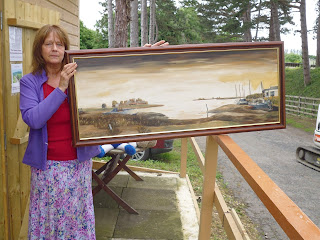 Julie holds up this very fine painting and is looking for offers in the region of £400 and it has been valued at considerable more than this. She hopes that this wider publicity will attract an interested collector.

Much activity was also taking place across the site. Steve was servicing the strimmers which are in constant use trying to keep the grass and weeds under control 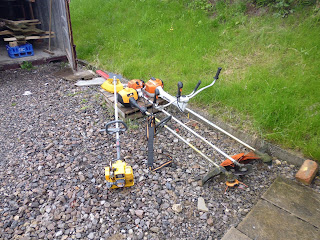 And Keith is keeping the trackbed in reasonable shape with one on the strimmers. 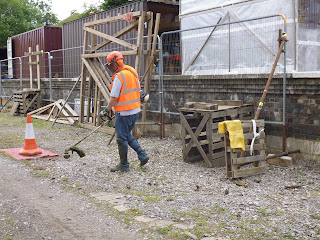 Peter Q and Dave H continued with making and drilling more dagger boards for the gable end of the footbridge.watched by Jo And Graham and Mike were busy as usual applying undercoat and gloss to the dagger boards and smoke deflectors on the footbridge.Whilst down in the car park Martin, Peter S and Peter H (behind the lens)were loading the dumper by hand with ballast for infill behind platform 2 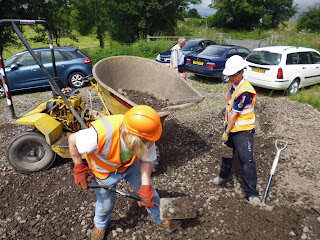 This was then taken up to the platform to be spread and levelled by Ian and David. 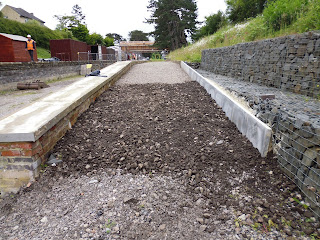 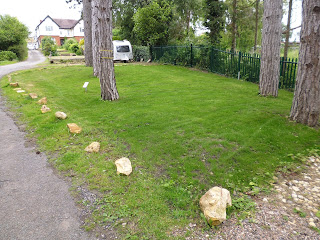 And finally the bricklayers continued with their excellent progress on the station building; the north end wall is now up to scaffolding height. 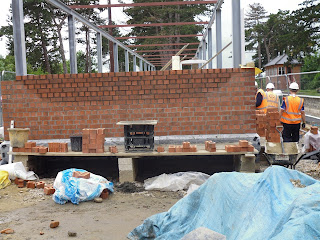 It is now posthaste to next week when the long awaited job of installing the security fencing, which was delivered today, will begin to be installed.and there will be yet another roll-over! Will someone else have to say it with flowers too?