Earth movers are us

The weather was hot and humid today with occasional very heavy showers which, fortunately, did not deter the 12 volunteers who signed in. There is the sanctuary of the messroom when the weather is uncooperative and the tea urn is always ready and willing.

A job that was remaining from Wednesday was clearing the site after the excavation of the gate posts. 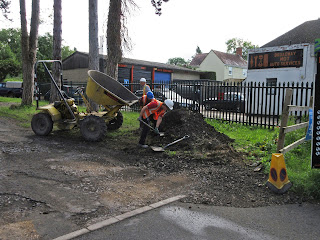 Ron, Steve, Peter and Jo took on this task and with the aid of the dumper transported the spoil to the rear of platform 2. 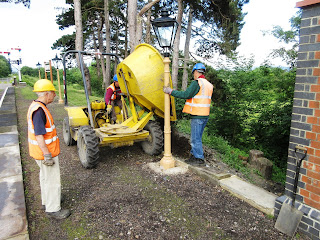 Vic and Roger assisted Steve in the disbursement of the spoil with the aim of building up the embankment at the back of the platform. This area of platform 2 had been left a bit short of material previously so this was just what was needed to build it up to match the rest. 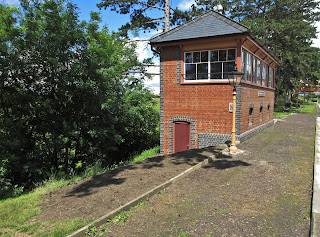 After all the activity with shovel and dumper the embankment was considered to be built up sufficiently in this location although more will be needed elsewhere. Jo thought that he should be sympathetic to the local bird population and covered the area with grass seed. The back of this platform will have fencing erected at some stage and a gate near the box but this may not be for quite some time. 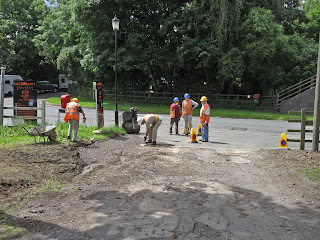 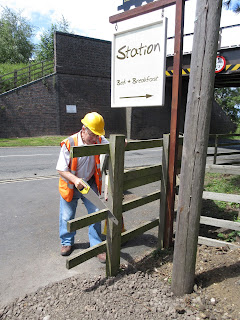 A good job done by all; Vic and Ron complete the packing and levelling, Steve seems to assuring John B that access to the bric-a-brac shed has been maintained. Stuart trims off the newly exposed excess on the fencing.
Discussions are underway about where the gate posts should be relocated but the position has not yet been determined. 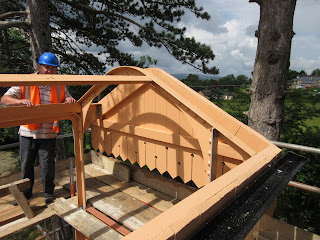 Dave has been busy on the daggerboards again and has now reached the stage where the end boards on the Malvern end, which follow the domed shape characteristic of this type of bridge, are completed. 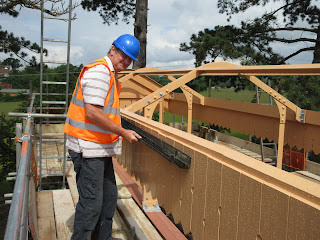 Not content with the carpentry milepost reached Dave moved on to the guttering on the southern side, not sure if the guttering was in position quickly enough to be tested by the heavy storms. 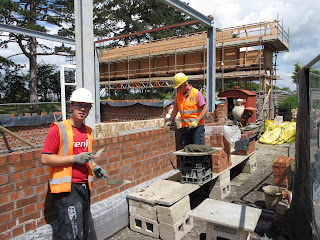 Tony was the only one able to be working on the bricklaying today but he was assisted from time to time by Peter the apprentice pointer, the pointing is very time consuming. Two courses were possible on the rear wall today, four more to bring it up to required level, and half a course on the front. 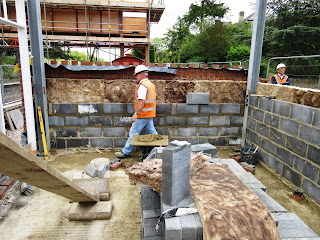 Now that the facing bricks on the northern end have reached a decent level it is possible for Clive to make a start on the insulation blocks on the inside. The end wall, seen here, was practically finished by knocking off time. 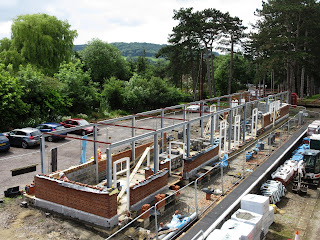 A recent view of the station building showing that the north end has almost reached the same level as the south.

Called in to visit to the Stainmore Railway yesterday, a great bunch of lads and lasses who were in the process of lighting up their resident Pecket and who were very complimentary about what we are doing at Broadway, thanks for that lads. Very impressed with what they have achieved so far, keep up the good work.