Today was the day of the Broadway Area Group AGM which was held in a local village hall. Some of the 12 volunteers on site today took a break in their activities to attend the meeting while a few did not (must have been a difficult decision to make). Others, not working, came along to bump the numbers up to ensure a well attended meeting finished off by tea/ coffee and home made cakes courtesy of Lynda the Group's secretary.


Back on the construction site. The scaffolding around the footbridge was tantalisingly close to completion but not close enough..... 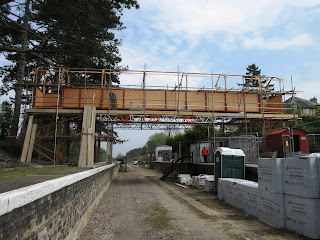 .... for it to be inspected and signed off for use by John C, the construction manager. So, unfortunately no work on the structure today, this will have to wait until the scaffolders have returned to complete the job. Once the scaffolding is accessible work can start on the roof, guttering etc. 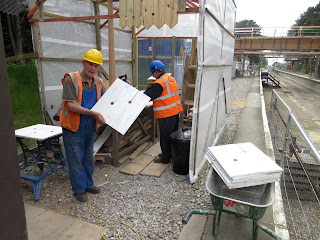 However Peter Q and Brian were able to continue with production of the dagger boards which will edge the roof of the bridge and will be required in some numbers once work starts. These dagger boards are having various coats of paint as the next stage of the process. Pity a well known make of fence paint doesn't make it in the GWR colours. 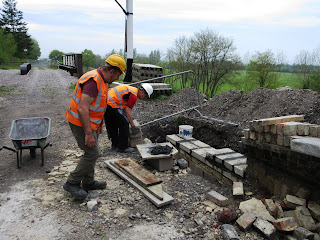 Peter K and Peter S working on the reconstruction of the ramp of platform 2 and it's progressing quite quickly with the blockwork almost completed. 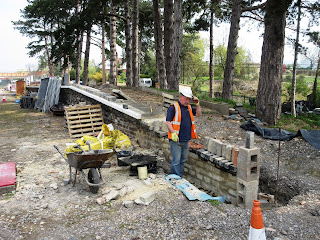 But not as quickly as Clive on the opposite platform, obviously Clive's experience of platform construction in recent years is paying off, the first row of corbelling is just going on. 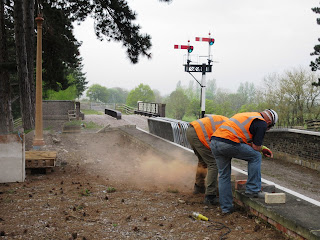 A second job for Peter K's was cutting bricks to the right shape for the slope on platform 1. 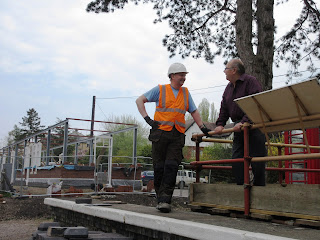 Phil takes his turn in becoming Broadway ambassador for a few minutes and answering the questions of a visitor. 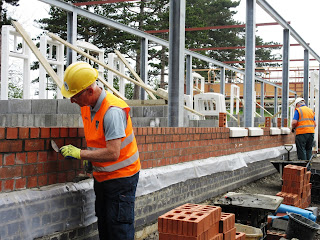 Tony and John continued laying the red facing bricks on the drive side wall of the station building but took a break to attend the AGM. Good progress was made however, filling in between the window cills laid on Wednesday and extending the two courses as far as the south end. 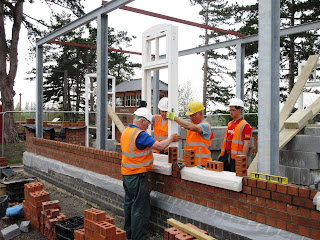 After completing the two courses the next stage was to install the window frames on this elevation. These window frames have to be supported temporarily until the brickwork can be built up enough to enable fixing brackets to be screwed to the frames and built in to the mortar at various intervals. 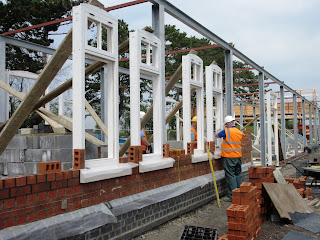 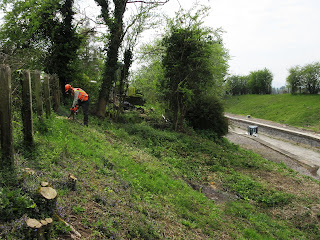 Roger continued with the clearance of tree stumps that had been cut down during the winter months, this should help to make the job of keeping the cutting sides trimmed that much easier. Jim's turn of duty in the bric-a-brac shed today and a good day it turned to be by all accounts. 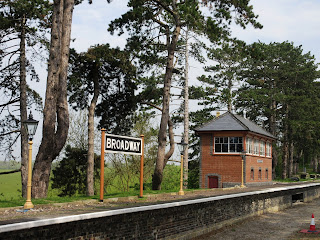 A recent shot of the signal box and the three platform lamps along the south end of the platform with all of them now with their tops installed.

The Friday before the coming bank holiday, May 27th, sees the Broadway Area Group's annual open evening. Local residents, supporters of the project and other volunteers are welcome to visit us, the event usually starts at 6:30 pm and lasts until 8:30 and we aim to lay on refreshments such as burgers and hot dogs with tea, coffee, beer and wine to wash them down. There should also be music and a raffle. See you there?