A Visit from Auntie and The Isle of Wight 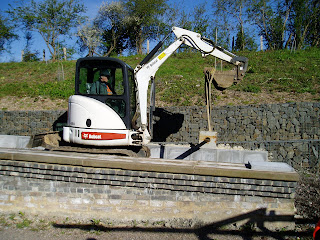 Twenty five volunteers signed in today on what turned out to be a beautiful day, close to 20c by the afternoon. The day started with the clearing of the last of the old steelwork from the footbridge and some lamp posts from platform 2. All heavy items that needed help from JC and the bobcat. With Steve on the dumper, Terry, Martin, Chris and Rod the job was finished late morning. This will now enable us to finish the back filling of platform 2. 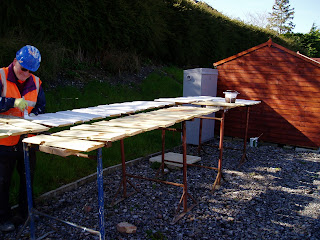 The dagger board production line continues. At least Mike can enjoy the weather whilst painting.
You'll note a spare paint tin and brush, it belongs to  .... 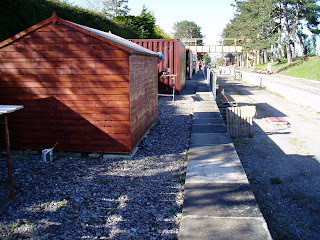 .... Graham, just been to fetch the brew that keeps you going. 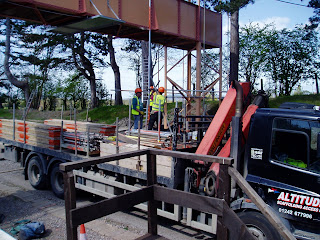 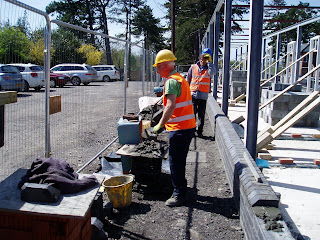 On the station building Tony is finishing off the plinth headers on the north end of the back wall. David was helping with the fetching of materials. 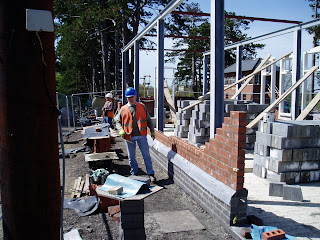 John S and Bob were working on the reds at the southern end. The aim being to get the wall high enough to position some more of the window cills. 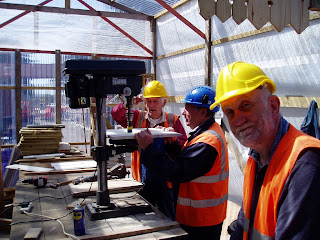 In the chippies shop, more dagger boards are being made in case the painters run out. Peter and Brian drilling the holes and Ian sanding before the painting. 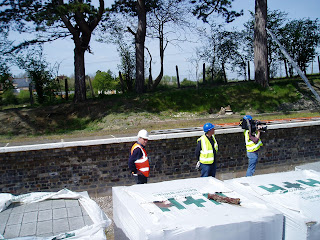 During the morning we were pleased to welcome some visitors from the Isle of Wight Steam Railway. It's always nice to show off Broadway to fellow enthusiasts.
We also had a visit from the BBC, the crew are seen with Roger our chairman. They were filming a piece about the Share Issue for West Midlands News. If you missed the piece which was shown at 1830 tonight, check it out on BBC  i player, it was a good piece. Although going well the share issue stills needs your support, if you can. 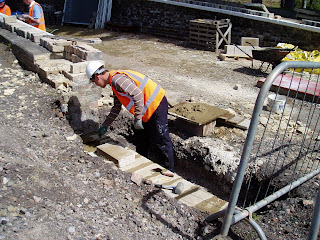 At the southern end Peter carried on with the footing for platform 2 slope, Clive was working on platform 1. 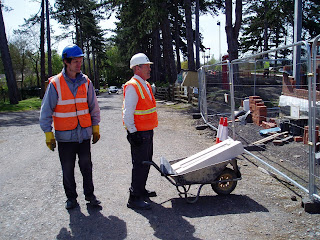 Paul and David have fetched window cills for the back wall of the station. Is the discussion, are they the right ones, or how do we get them over the fence? 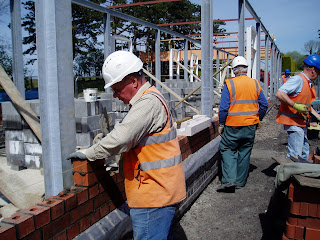 The cills delivered Bob and JC are setting up the line to make sure they are at the right level. 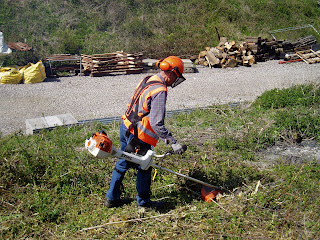 Work continued  on the cutting Dave B and Vic working up to the fence line. Later Terry on the brush cutter Steve and Rod joined the team. The inevitable fire made things a bit too warm. 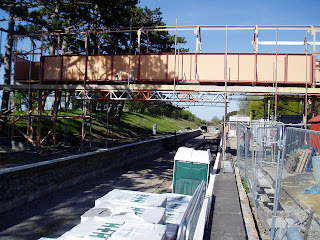 At the end of the day the scaffolding was well advanced, but will need to go up another level. 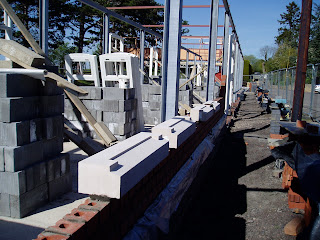 The wall started earlier in the day now up to the level required to have bedded four window cills in there position. A busy day, we all went home still in the sunshine, content.