It turned out better than expected

The weather continues to outwit the forecasters, we thought that we were guaranteed a day in the messroom drinking tea and putting the world to rights because of the expected precipitation but Broadway escaped and the 15 of us on site made the most of it.

But first things first, Daggerboard Dave got cracking on the most important task.... 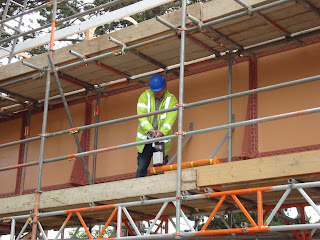 ....which was to fix that darned security camera located on the footbridge. This camera seems to be a little bit temperamental in that it keeps losing the picture but in the end it was easier to swap it with what is believed to be a good one, time will tell. 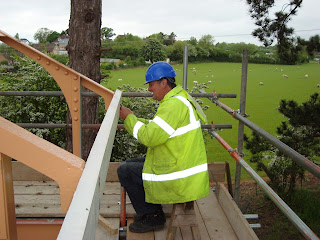 After swapping the cameras Dave returned to the day job which seems to be assistant carpenter. The task for today was to 'let in' the heads of the bolts fixing the fascias to the metal frame on the footbridge. The bolts being used are quite substantial with a head size somewhere in the region of  1½" in diameter so each one takes some time starting with a cut halfway through the wood with a circular saw then chiselling out the middle. The point of the exercise, of course, is to allow the dagger boards to sit flush on the fascias. 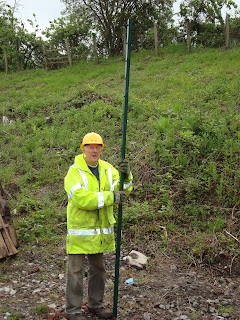 Meanwhile, in the cutting north of the station, Vic made a start on renewing some life expired fencing by carrying the components to the top of the slope for a trial run. The intention is to eventually replace the complete section of fence from the end of the platforms up to the railway's boundary just short of Springfield Lane bridge. 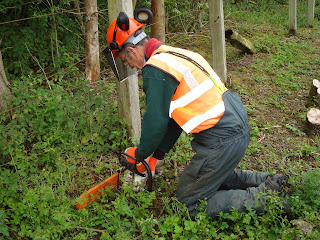 With the fencing project in mind Roger and Brian (below) continued the removal of the tree stumps, at the top of the cutting left there during last winter's clearance. 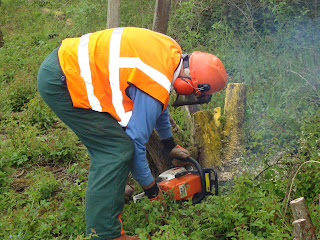 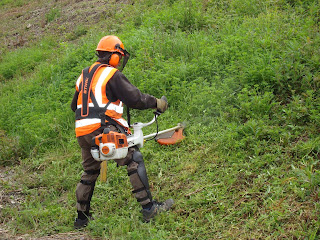 Steve made a start on the unglamorous job of trimming the cutting sides. Looks easy but fully kitted out with safety equipment, as Steve is, this job is hard & tiring work. 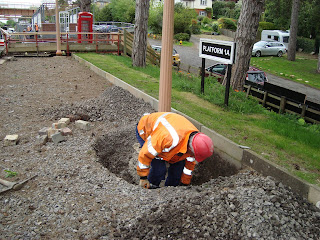 The council street lamp posts that were installed a few years ago along platform 1 are gradually being replaced by Great Western lampposts when we can get them or when we can't by reproduction posts to the same style. Jo is digging the ballast out around the base of post 3. 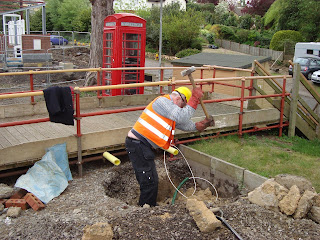 After which Ian takes a turn on breaking up the concrete used to bed in the posts originally. The first streetlamp post so removed has already had a new concrete bed cast to take a replacement post. 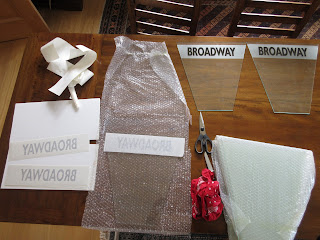 The shells for the lamps tops have been delivered to Broadway and are ready to have the glass fitted. Luckily Jo seems to have been an ardent fan of the Blue Peter programs so knows exactly how to cut the Broadway transfers to fit the lamp glasses. 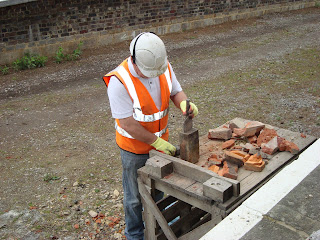 Clive soldiered on with the reconstruction of the platform ramps which necessitates cutting a fair quantity of bricks, using the lumpy and bolster method, to take the slope. Platform 2 (below) needs one more course for completion while platform 1 now waits the coping slabs. 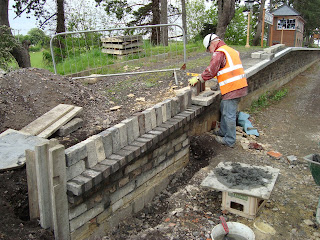 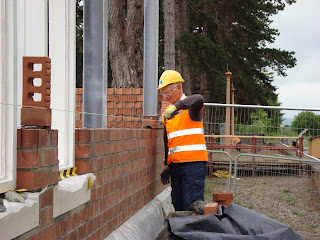 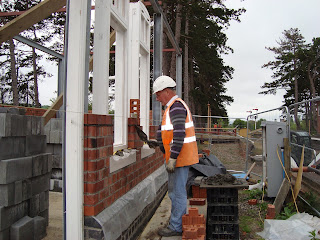 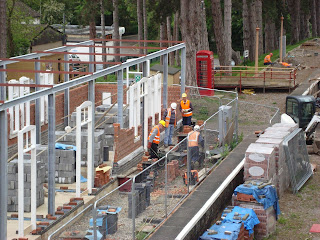 In this view Ian is moving bricks from the south gable end to the side of the building currently under construction, Robin is bringing the latest barrow load of mortar to the expectant brickies. Three courses were possible today leaving two more to bring this elevation up to the level of the gable end 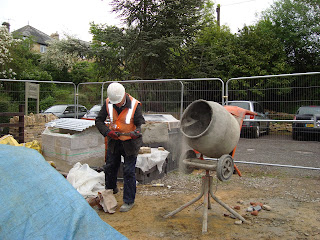 Today's mortar man, Robin, appears to be serenading the mixer with his air guitar shovel. Try the shovel the other way round Robin (actually he has just thrown a shovelful of cement into the mixer). 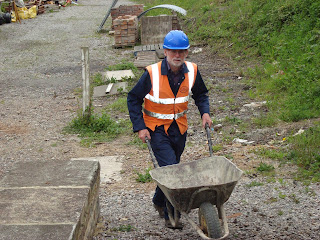 Not to be forgotten, John B was head gardener today and is just returning to the fold after delivering another barrowful of weeds to the pile. Joyce was relief shopkeeper and had an excellent day with the bric-a-brac.
Just in case previous reminders passed you by there is still time to tell you that next Friday, May 27th, sees the Broadway Area Group's open evening when local residents and others interested in the project are welcome to visit us. There will be access to a limited area of the track bed which is where light refreshments will be available accompanied by some live music. Hope to see you there! 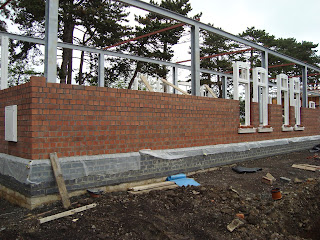 One last view of the station building showing the window and door frames on this side with supporting scaffold boards removed. Looks good doesn't it?
Posted by Unknown at 23:57