Is This A Dagger Which I See Before Me ?

An early morning downpour and the threat of more rain didn't deter 21 Volunteers today from turning out. The dark clouds were there but none of the rain that had been forecast came our way and in between the clouds it was quite a pleasant day . 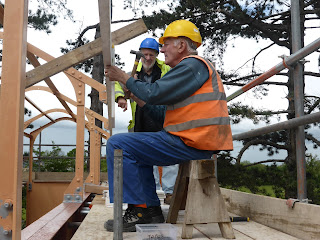 Firstly my reference to the  "Dagger", after weeks of cutting to length, inserting holes, placing a 40 degree arrow slant at one end and then giving a coat of primer we then had the first batch of the footbridge dagger boards. Here Pete under the watchful eye of John B has fixed the first one on to the fascia board. 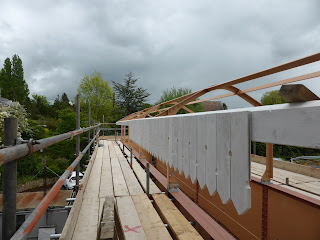 By the end of the day we had run out of our batch of about 30 which covered about 4 m of fascia board. Next week probably another 30 or so. 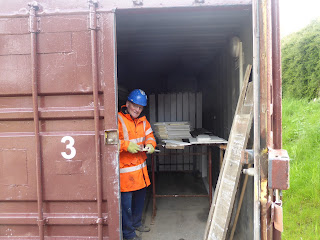 Back in container 3, keeping out of the showers, Mike is seen priming the next batch. 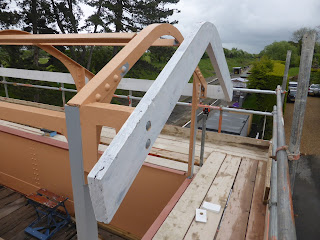 Elsewhere on the footbridge the carpentry team fitted one of the gable ends which is one of the original parts of the bridge. The wood was still in good condition and all that was required was the old paint to burned off and the a coat of primer to match the fascias. 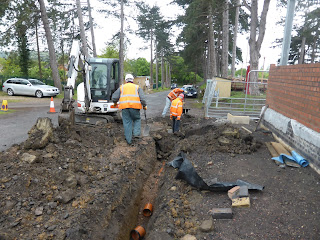 As shown on the previous blog John C and his team continued the installation of the surface water drains. Here, they are now installing the drain from the south corner heading up the side of the station building.
This drain will eventually meet up with the footbridge down pipes . 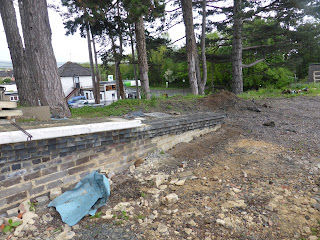 Clive was also finishing the two platform ramps, this is the end of platform 1 ready to have its slabs re fitted. By the end of the day platform 2 was in a similar postion . 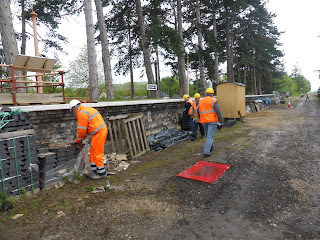 One of the main jobs on site is a job called         "shifting". Today's shifting job was carried out by a team led by Rod and Terry which included various members throughout the day.

First shifting job was to move one pile of bricks about 20m to the south . 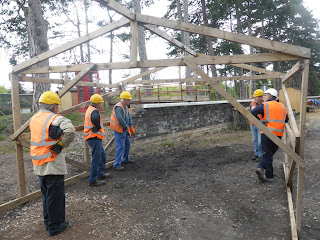 Second shifting job was to move our temporary shelter in to the space created . The shelter when covered will be used on the Open Evening to house the BBQ equipment etc. 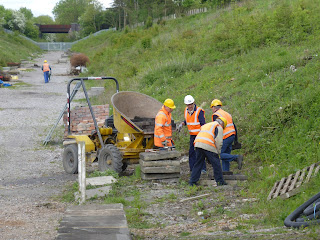 Then back to shifting more bricks. Here the group fill the dumper with another load from the northern end of platform 1 to be added to the pile which will be eventually used to fill the gap in the platform wall.
Then there is the long walk up the track bed to empty and repeat. 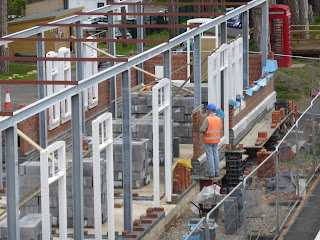 John S not needed on the drainage after tea break moved back to the station building to add a few more courses building up the last corner on this section with Jo cutting a quantity the half bricks, or snap headers, for John.

As the Open day is just round the corner the site had a general tidy up. Pat spent most of the day cutting the grass around the site while Vic was tending to the gardens .

Just another reminder that the Friday before the coming bank holiday, May 27th, sees the Broadway Area Group's annual open evening. Local residents, supporters of the project and other volunteers are welcome to visit us, the event usually starts at 6:30 pm and lasts until 8:30 and we aim to lay on refreshments such as burgers and hot dogs with tea, coffee, beer and wine to wash them down. There should also be music and a raffle. See you there ?

Posted by David Holdsworth at 11:10