12 volunteers on a day that started a bit dull but later turned into a warm and pleasant afternoon, would have been a great day for laying bricks but unfortunately the guys had other commitments.

But the show went on in other areas.... 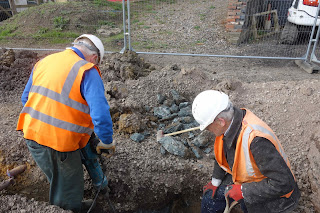 Work continued on the trench to take the surface water drains from the station building to the trackbed centre drains. The hold up on Wednesday had been the footings for platform, these were constructed some time ago, and although an attempt was made to cut a gap through them the equipment on site was not heavyduty enough to do the job so something more suitable was hired in. John C, Robin and Peter S set about the job. 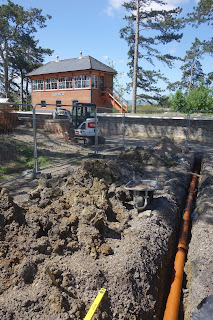 Worth the trouble to get the right tool for the job! This was the position just before backfilling started with the drain in place and looking good. 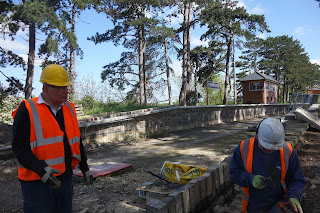 Just to contradict the earlier statement, there was one bricklayer in today, Clive was finishing off the ramp on platform one with the help of Keith and Peter K. 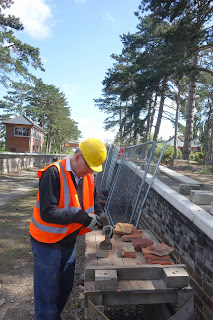 Keith and Peter's job was to provide Clive with bricks of the requisite shape and in sufficient number to complete the slope except for the edging slabs which will have to wait for another day. 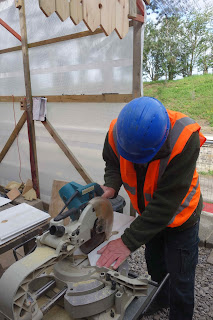 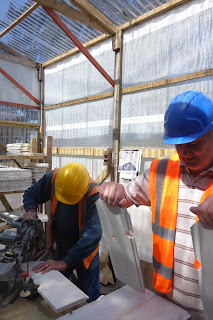 Peter Q and Dave spent the day on the dagger board production line, Dave is carefully cutting the slots between the boards in the right hand photo. In the other shot Pete is cutting the angles and it appears that Dave is having a slight problem figuring out how they go together. 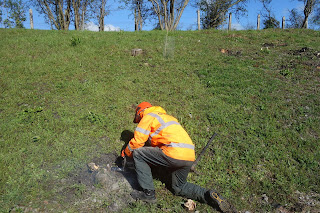 Roger must have been slightly warm in the chainsaw kit but nonetheless made some more progress on the removal of the old tree stumps on the cutting slopes. John B spent the day in the bric-a-brac shop but still found time to remove last year's Christmas tree which had finally given up the ghost. 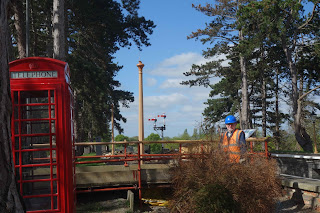 And finally a view of the station building from the southern end. 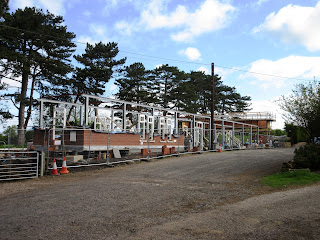 Just a reminder that the Broadway Area Group open evening takes place at the Broadway station site on the evening of  27th May from 6;30 to 8;30. This has become an annual event and is very popular with local residents, supporters and other volunteers. We would love to see you there so please come along if you can and help us enjoy the conversation, the hotdogs & burgers and some liquid refreshment to help it down. There will also be raffle tickets available with around 10 prizes including one for Sunday lunch for two at Broadway Hotel.
Posted by Unknown at 10:25