Friday's open evening was a tremendous success and was the best we have ever organised. This was probably due to a combination of more things to see, like the footbridge and signalbox, and the weather which was comfortably warm all evening, previously open evenings have had lousy weather.

Access was laid out along platform 2 to enable our friends and supporters to get within touching distance of the footbridge and this was very popular, in addition to this the signalbox was open to visitors. Your blogger was tour guide/ resident expert in the box all evening and the building was absolutely packed from beginning to end, many interesting people came in for a chat, some old friends not seen for a few years and a lot of non-enthusiasts who were fascinated by a signalbox interior and amazed at what had been achieved. Marilyn and Barry kindly donated a signalman's stool to us during the evening, thank you for that.

A few photos of the event 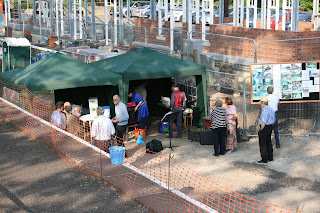 Even before the official start time a few people were milling around. The gazebo on the right is providing shelter to Broadway volunteer Gordon and his fellow musicians who entertained everyone all evening, even non-jazz fans said they enjoyed it. 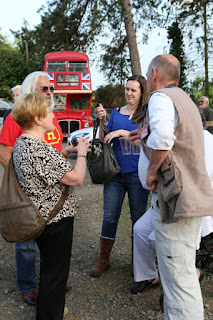 Paul, front right, is chatting with a group of people but behind them can be seen the London Routemaster bus that Graham kindly brought along to provide free transport for some of our visitors, thanks Graham. 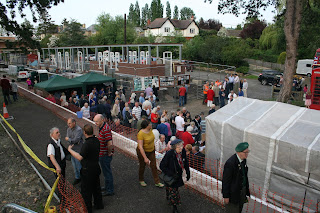 A bit later in the evening there is by now quite a queue in front of the white 'tent'. The white tent had had a previous life as the shelter for the footbridge span but was the burger bar yesterday evening. The burgers lasted until 10 minutes before the end of the evening. The whole event was planned by Peter Q this year and ran very smoothly. Well done Pete and thanks to all the volunteers who put the time in on Friday to get the site ready.

So Saturday dawned and some of us were on the way back to Broadway. As can be expected we were rather thin on the ground today not only because of the previous evening but because some of our number had put there names down to assist at the Railway's "Swindon built" steam gala and one or two others just wanted to spend their day at Toddington, or wherever, enjoying the gala. 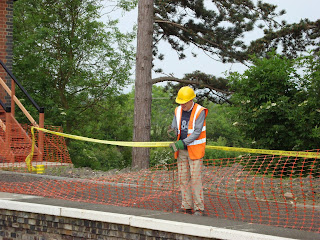 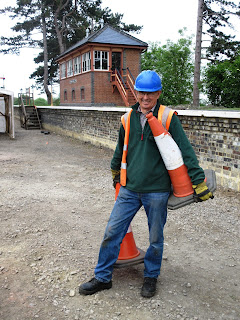 First job for us all was clear the site from the night before.
Vic is removing the fencing from the edge of platform 2 while Roger is collecting the traffic cones from wherever they might be. The gazebo's have gone but the tent awaits its next incarnation. 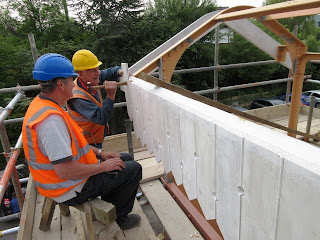 After the clear up we resumed the jobs that we were doing before the excitement. Dave and Pete, who had swapped his chef's cap for a hard hat, returned to the dragon's teeth, well, it makes a change from the other description. It looks for all the world that the hammer handle has gone through the wood and is poking out the other side. 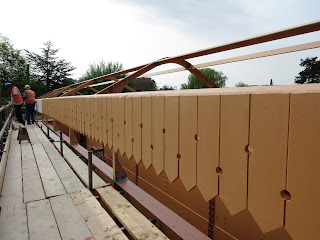 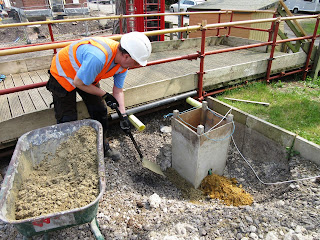 Jo and Phil continued with the replacement of the lamp posts. One of the visitors to the open evening on Friday asked if it should be lamp posts or lampposts, the Concise Oxford Dictionary says that the British spelling is lamp posts so I guess we'll stick with that. Lampposts is American apparently.
This is the final post on what we call platform 1B to have its new foundations installed. The wooden box is a mould around which the concrete is packed and the pile of sand protects the cable ducting. We remove the mould while the concrete is still a little bit wet, the concrete is a pretty stiff mix so doesn't fall in when the support has gone. 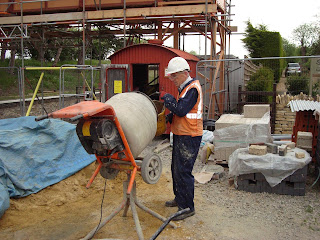 The station building.
Robin was mixer operator again today. (A beating with an air guitar has been threatened so words will have to be chosen carefully here) Great job Robin, keep up the good work, wonderful mortar today and concrete to dream of. 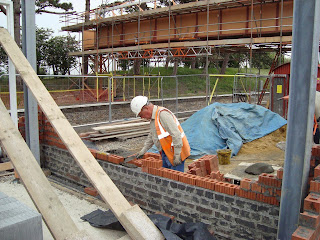 Bob laid the first two courses of reds on top of the plinth headers along the north gable wall, as if this was not enough he also found time to make a start on the fourth and last "corner" on this section. Thanks Bob! 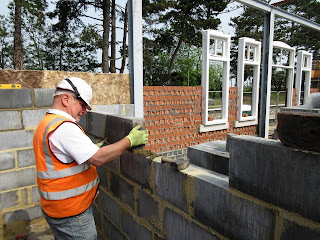 Clive and John continued with the laying the Celcon blocks on the internal walls. It is amazing how warm it gets in here and these walls only half way up really noticeable last Wednesday when there was a cool breeze blowing. The kitchen area was brought up to eight courses and start was made in the refreshment area and will be continued on Wednesday. 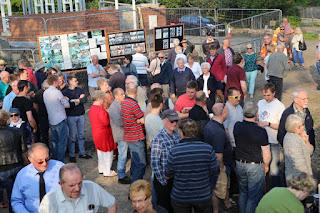 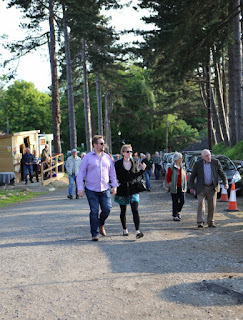 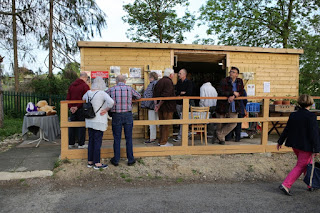 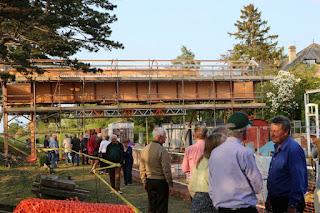