A very frosty start to the day preceded a slight upturn in the recent temperatures later which was very welcome, heavy afternoon local showers somehow managed to miss Broadway. 12 volunteers busied themselves, mainly on construction. 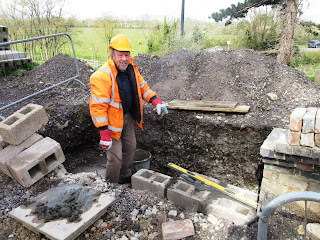 Peter and Clive started the next phase in the re-construction of the platform ramps. The foundations have been 'going off' for a while now and as the brickwork around the footbridge tower is complete the time had come....

Peter has adopted one method for the footings using hollow concrete blocks, which weigh a ton by the way, and filling the hollows with concrete. 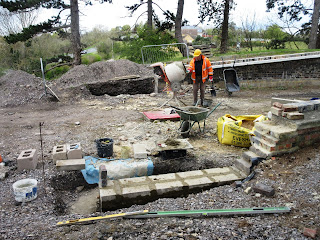 While Clive on platform 1 was using solid concrete blocks from the outset. Both do the job equally well and has the benefit of making use of the available materials on site.

Turning now to the station building 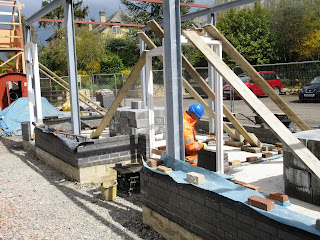 The blue brickwork is now complete on the trackside of the building at the Honeybourne end. There is half a day's work required to bring the wall opposite, on the drive side, up to the same condition. Big black clouds massing nearby in the early afternoon caused the brickies to stop laying a little early and catch up with the pointing before the expected wash out which, as it transpired, never came . However the chance to get off home early wasn't wasted as most of us came back in the evening to join the annual volunteers fish and chip special suitably scrubbed up. The Railway's directors wait on the volunteers on the F&C special, goes down a treat! 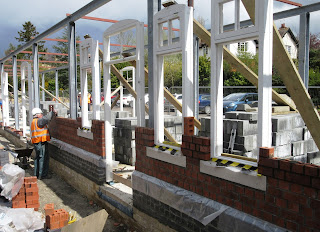 First thing this morning those on site at the time started by carefully positioning the first three window frames on the sills which were put on last week. This section of wall seems to be rising quite quickly, already as high as the brickie can comfortably reach but there are the other two sections at this end to bring to the same level before moving to the north end. This view gives some idea as to why the brickwork between the sills was built the way it is. 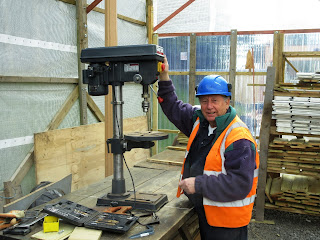 Elsewhere, storeman/ carpenter's mate Brian welcomed the arrival of a drill press to help with the drilling of the numerous holes in the dagger boards being manufactured in house for the footbridge, initially, and the main building, later. The drill press was generously loaned to the project by the John C the Railway's construction manager and is now under lock and key, in the stores (where else!).
Vic continued with the gardening work around the drive, Keith did more COSHH work and Stuart did a turn in the bric-a-brac shed. 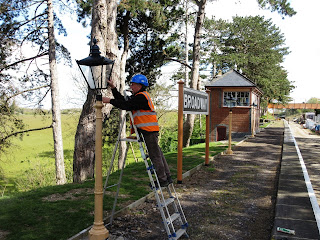 Steve assisted Jo in replacing a platform lamp top that had been damaged when caught by a gust of wind a couple of weeks back. The damaged one will now be repaired for re-use later.

On the subject of lamp posts, an update 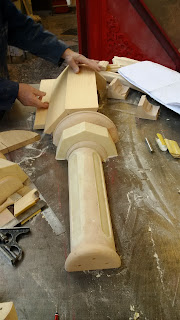 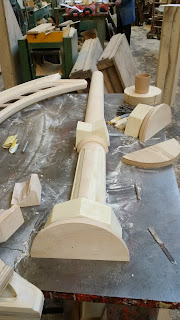 The pattern for a replica GWR platform lamp post is almost ready (see photographs). It should be available for a first casting early next month. After inspection, we will be ready to order!


One other GWR railway is joining in with us, as well as a department on the GWRS - the Friends of Winchcombe have also ordered one post, to go on the Winchcombe platform extension. If you are a GWR railway and are reading this, it is not too late to join in.


The tops for the lamp posts have already been ordered, and are awaiting delivery. The lamp tablet stickers have also arrived, so we are well advanced on this project.


Thank you once again to the kind, individual sponsors for the replica GWR posts, which will make Broadway look really great, and authentic. 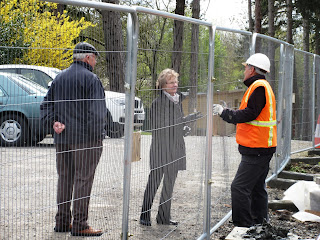 "Don't get too close, dear, he might be dangerous!"