A Bridge and Brickwork to Perfection

Despite some very unseasonable weather with a sharp early morning frost 24 volunteers reported for duty today at Broadway.

The main task of the day was to get the all the fascia timbers for the footbridge up onto the decking and then position the first one ready to be bolted into place. The fascia timbers will in due course provide a fixing for the metal gutting and the decorative dagger boards. 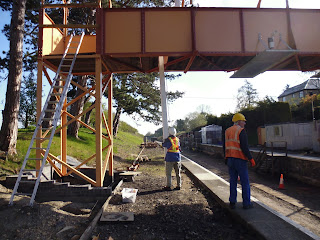 Ron is seen here guiding the timber up to Dave H on the bridge with Peter Q ensuring all is well. 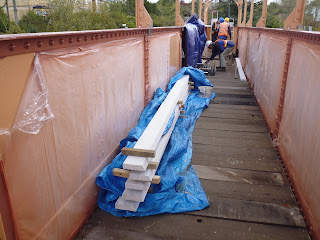 The timbers neatly stacked on the footbridge in preparation for them to be attached to the metal frames already in place. 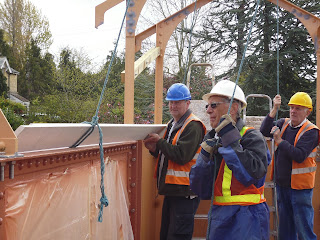 Peter Q, Ron T and Dave H prepare to position the first timber into place. Fixing holes had already been drilled on the right hand side and the half tenon joint can be seen on the left of the picture. 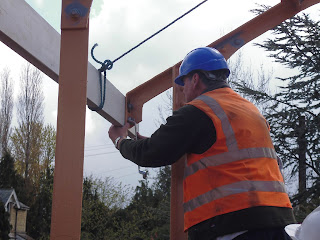 Dave H carefully bolts the timber onto the metal frame, The second timber was also put into place with the half tenons matched up and holes marked for the fixing bolts. 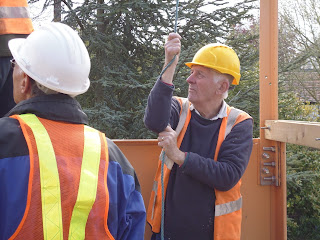 Peter Q, Master Carpenter, ensuring everything goes according to plan. 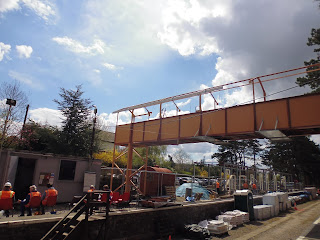 During the morning we also took delivery of the cast iron rain water goods for the footbridge and, matching those on the signal box, they are in keeping with the heritage design of the station reconstruction. 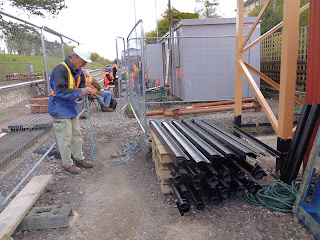 Ron admires the cast iron rainwater goods; they were then safely stored away ready for when they will be be required. Scaffolding will be erected on both sides on the bridge in the next few weeks to enable the guttering and dagger boards to be attached to the fascia timbers. 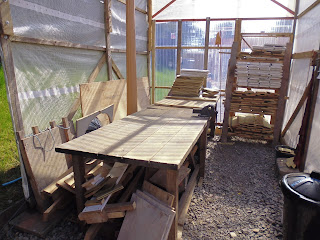 The carpentry department, led by Peter Q, run a pretty tight ship and their work bench is always left spic and span at the end of the day. 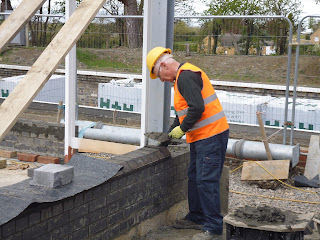 Tony is seen here completing the plinth header course on the north end of the building. His earlier work is already covered up in anticipation of another cold and frosty night ahead 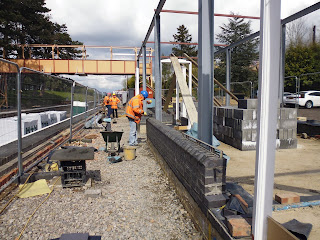 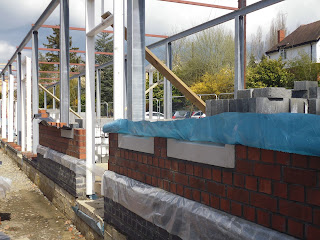 The Monday team put into place two more window ledges and the frames will soon go in.

An example of the superb attention to detail on the brickwork is shown below. 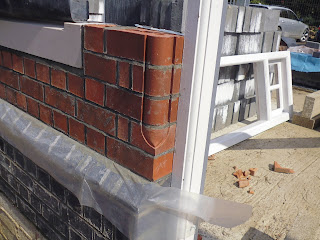 Special ornate bricks are being used against the door frames. This attention to detail will look really impressive when the building is completed.

The recent very heavy rain washed a great deal of debris down the ditch at the Childswickam road end of the car park and Terry and Steve took the opportunity of some rare dry conditions to remove the blockage by the drain that goes under the road. 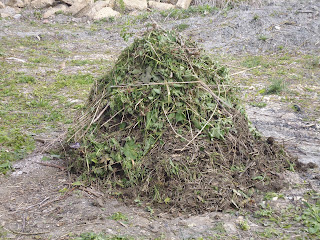 The pile of debris that was washed down the ditch, causing the blockage. 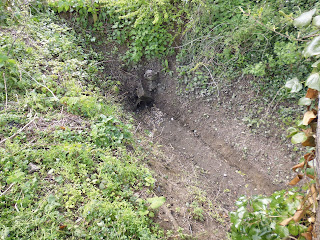 The ditch cleared out and the blockage removed. It is very unusual for the ditch to be dry at this time of the year but it is now in very good shape for when heavy rain does return 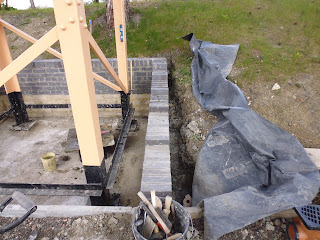 Clive finished the north side retaining wall under the tower on platform 2. A very smart job it looks too.
After lunch Clive made a start on the slope for the barrow crossing at the end of platform 2, with more work to follow next week. The barrow crossing will be a vital link to both platforms when our most welcome disabled visitors travel with us

Dave B, Vic and Brian were busy on the boundary fencing along the Cotswold side of the cutting while Graham and Mike painted and prepared more timber for the dagger boards. Ian was on the strimmer clearing vegetation on the south end of the platforms.

At the end of the day it was a question of a "bridge far enough",some excellent brickwork, and other equally important jobs being carried out around the site