This is the short and the long of it

It could have been the chill weather or the Shakespeare celebrations that had an effect on the number of volunteers today but only 10 of us made it, subsequently, progress was modest.

But to begin a return to Wednesday's and its glorious weather which gave the opportunity to crack on with the bricklaying. 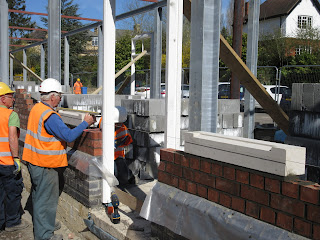 Which in its turn gave the team the chance, in late afternoon on Wednesday, to start laying the first of the first of the window sills. John C, Tony and Peter S are seen carefully positioning the second one to go in, the window frames will soon follow on this wall. The white-ish covering three courses below the sill is a strip of plastic sheer positioned there to prevent mortar dropping on to the plinth headers. 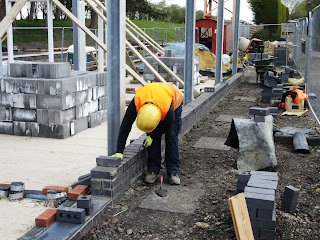 In comparison, today there was only one bricklayer in attendance and the weather was a few degrees down on Wednesday. Nonetheless, Tony persevered and laid a course along the northern gable, and one third of the Cotswold side. 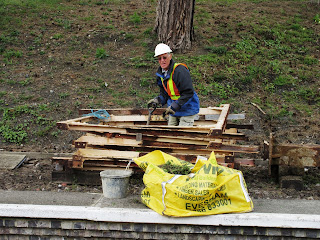 Elsewhere on site Ron, looking a tad surprised, busied himself with keeping the weeds under control so that the remaining bridge parts do not get lost forever in the undergrowth on platform 2. 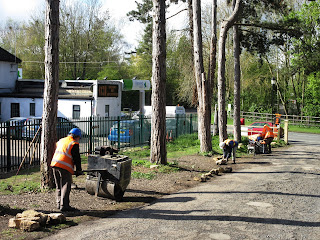 Steve rolled the Cotswold side of the drive, which had had some holes loosely filled with ballast during the week, while lower down the drive strimming was the order of the day for Peter K and more edging stones were positioned by Ron after moving on from the weed control. 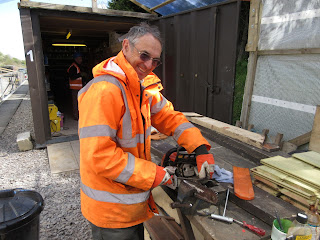 Meanwhile Roger was attempting to remove more of the old tree stumps on the site. The problem with this exercise is that stones tend to hide themselves among the tree roots which causes the chain to become blunt quickly and often although Roger seems to very happy in his work despite this nagging problem. 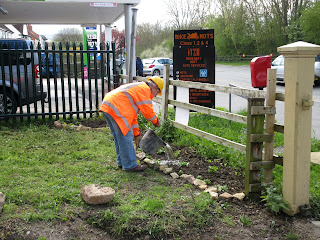 This is where the station drive meets Station Road so it seems worthwhile keeping the area in good condition and planting a few bedding plants in the bed, being watered in by Stuart. Hope that Jack Frost doesn't pay a late visit and ruin the good work. 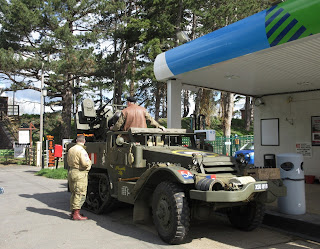 A unusual visitor to Station Road garage during the afternoon was what looks to be an ex-army halftrack. Jo took a short film of the vehicle pulling away after filling with fuel which can be viewed on Youtube via this linkhttps://youtu.be/NSpUkJ-ikBM


Some of the blog comments received recently have been from "Anonymous". We welcome comments but please lets us know who you are. There is the odd exception but generally comments from anonymous are not published so please bear this in mind when you write a comment.

The blog title is from The Merry Wives of Windsor by William Shakespeare
Posted by Unknown at 23:34