A Spring Clean-up and The Signalman's 9 Steps to Work

33 Volunteers were at Broadway today to enjoy the wonderful sunshine and also to get stuck into some very meaningful work.

Main task of the day was to clear Platform 2 of much surplus material that had been accumulated when the footbridge was being restored, The material consisted of several very heavy trestles that had supported the footbridge span for many months and also various amounts of timber and other ironwork from the stairs which will be re-used in the future. 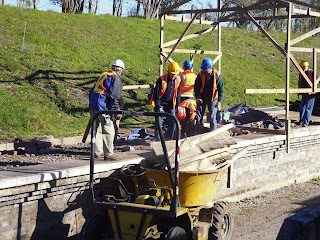 The team lead by Terry loading the dumper with the first of the timber etc which was taken further up the track bed to predetermined locations. 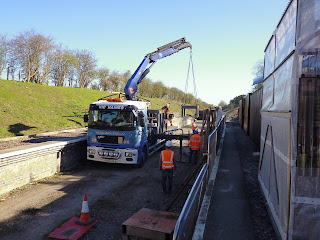 The heavy transport vehicle from Vic Haines Transport Ltd lifts the trestles onto the lorry. Additional trestles were also collected from the car park and then returned to their owner at Wishaw. 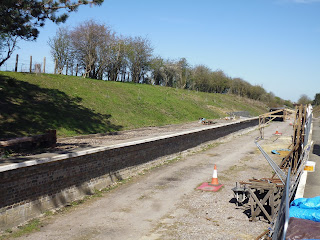 The north end of Platform 2 looking a treat and now clear of most of the surplus material. Just some heavy pieces of ironwork from the footbridge steps and two lamp posts yet to be moved - a job for next week. 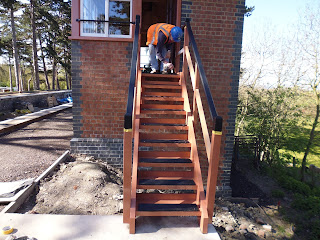 The top rail is painted black and the remaining woodwork in traditional GWR colours. 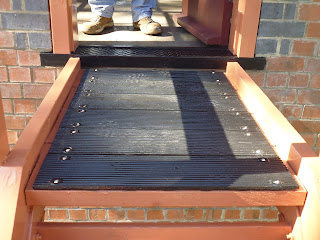 The top step now with the metal treads in place. 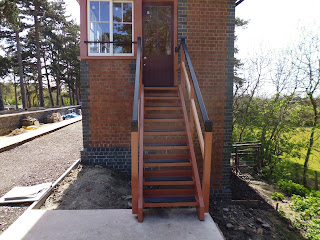 And the 9 steps with their metal treads in place.  They set off the signal box extremely well and the project  is a great credit to Graham and Mike who have spent many hours of working on it. 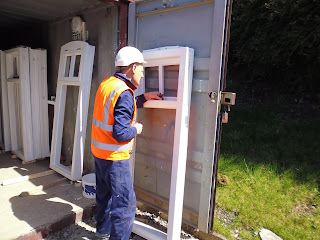 Keith and Mike spent the day replacing the window catches that had been removed so that the frames could be painted, Unfortunately it was found that, although each catch looks identical, the holes for the screws were slightly different on some of them. Much patience was required to sort this out.
Keith is shown here screwing a catch into place having found one that matched of the original drilled holes... 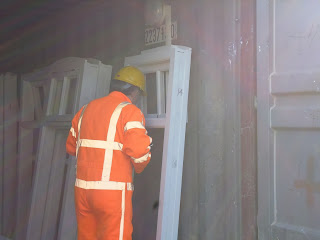 ...and Mike is examining the screw holes in the window frame in order to get the correct catch into place.

Back in the carpentry shed Dave H had the task of drilling the decorative holes in the dagger boards. Two separate boards are first of all to be matched up and them tightly clamped together before the drilling process takes place. 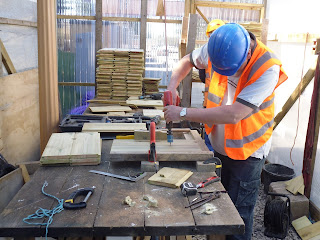 Dave is drilling the first hole with Peter Q in the background getting the timber ready for clamping. 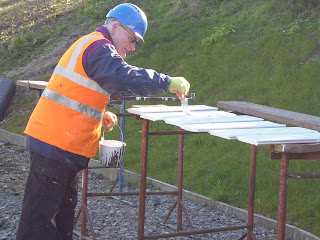 Mike had the task of priming the dagger boards prior to drilling. It is a very time consuming job as the timber is tongue and grooved so there are many surfaces to paint. However at the end of the day Mike had made great progress. 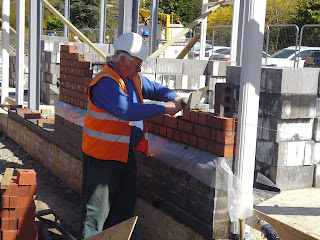 On the station building the brickwork is progressing at a pace and John C is seen here putting his many years experience in the building trade into laying the first courses of reds on the platform side of the south end of the building. The courses are alternating "stretchers"  and "headers". The headers are half bricks, previously cut to size on the brick cutting machine, and require great skill to lay. 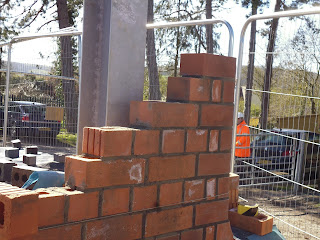 This is a close-up view of a small section of wall, showing the courses of headers and stretchers. 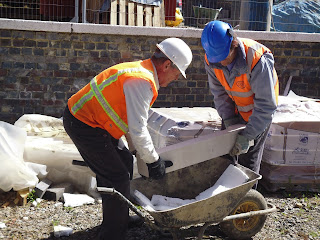 Soon some of the window frames will go in and Paul and David collected the first of the window sills. Great care was taken in moving them, hence the polystyrene lining in the wheelbarrow.


There were many other projects on the go during the day and the opportunity was taken to put some ballast on the area of the driveway where some trees stumps have recently been removed. 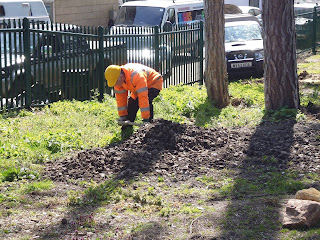 Dave B is levelling out the first of several dumper loads of spent ballast to make good some of the uneven ground. 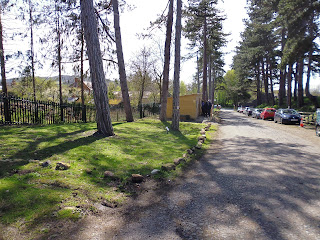 A view looking down the driveway with the grass seed on Vic's lawn looking very well indeed.. 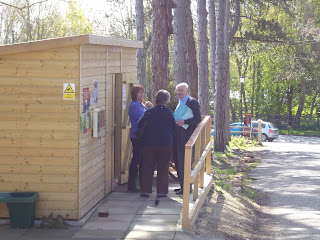 Julie was in the sales cabin and had a steady stream of visitors all day. She is seen here talking to two of her satisfied customers.

Work was also underway in the car park by Roger and Pat while Chris H continued work on the safety fencing alongside Platform!

And finally a little piece of nostalgia from the past. 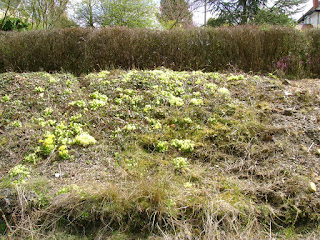 This picture was taken by your author in May 2010 and shows the wonderful display of primroses that appeared after the brambles etc were cleared from the station footprint (this area is now Platform 1).These are the very ones that were, as discussed last week, moved to other areas at Broadway and are now doing well. It is also extremely pleasing to  hear that some of them are now growing well at Cheltenham Racecourse Station (picture courtesy of Bill B from his blog).

The wonderful Spring weather today certainly made it a very enjoyable and productive day and put a "spring" in everyone's step.