A bit of a shock driving to Broadway this morning as the rain that was falling when leaving home quickly turned to sleet then snow and then heavy snow, despite this 20 volunteers signed in at some time during the day although not much was achieved much was discussed in the messroom while waiting for it to improve. 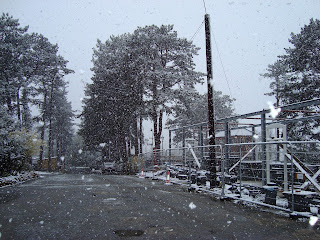 Not normally seen from this angle, the station building amid a heavy snowstorm with brick laying at a halt and it never got going all day. The weather did improve later but by then it was, unfortunately, too late to make a start. Its not just a case of having enough time to lay bricks its also having enough time to point them afterwards. 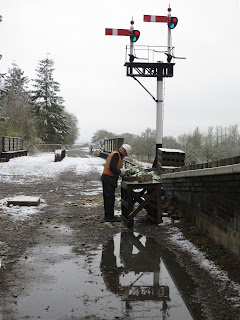 Completely undaunted, Robin continued with cleaning bricks, the same bricks that he had cleaned once before 2 or 3 years ago. But now Robin can hang up the hammer and chisel again having completed the job for the second time (for now?) 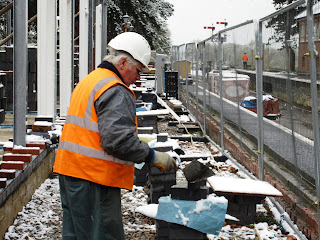 John C is clearing the snow from the top of the brick piles to prevent them freezing together in the forecast overnight temperatures. Someone did ask if John could turn his hand to igloo building (but not within earshot.) 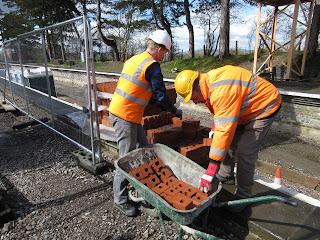 Once the weather had improved Graham and Peter took the opportunity to bring the recently cut reds up to the construction area and stack them up ready for use. A start in laying reds is not that far away it would seem. 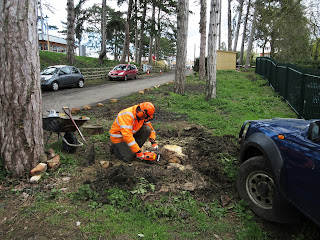 Roger and Vic continued with clearing and tidying the drive area. While Vic was rescuing some pieces of Cotswold stone from the car park area to line the side of the drive Roger was working on the removal of the last of the old tree stumps at the side of the drive. Just practicing your wood carving skills Roger before taking it out? 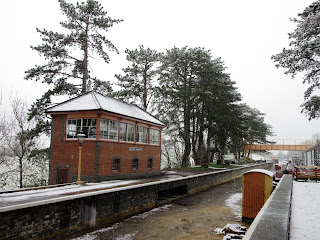 This one is included because it is view that has not been possible to photograph previously with signal box and footbridge in view. It only takes a little imagination now to see how will be when its in use. A great start to the share issue so lets hope that this photo inspires others to support us.