Smoke Gets In Your Eyes

Well, the newly delivered smoke shields, when they are fitted, should do their part in preventing this once we are operational. 21 people on site today on what turned out to be a bright and sunny day.

There is a still a focus on the footbridge as we are working up to a deadline in the coming week. 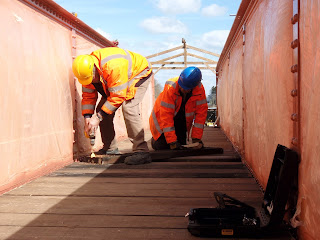 Roger and Peter continued with one of the other vital jobs on the span, the fitting of the remaining footboards. There is a relatively small crane due in on Monday to lift some of the more minor items into position on the bridge/ towers before the big event which is planned for Tuesday. 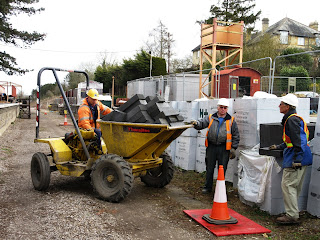 To allow either/ both cranes unimpeded access to the vicinity of the bridge it was important to remove the insulation blocks (these will be used for the station internals walls) from the track bed where they had been unloaded from the delivery lorry last year. Tony, on the dumper, is assisted by just John and Ron on the trackbed............. 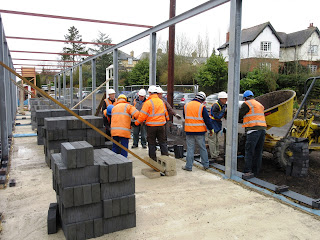 ...but a small army was waiting to help at the other end. Not all the blocks were removed only those thought to be in the way, wouldn't want to put to much strain on the newly laid floor. 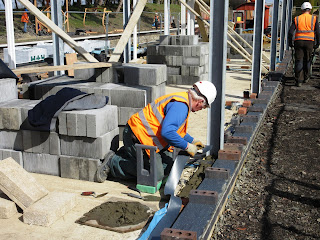 With the 'blocks' issue out of the way for the time being those involved with the station building could return to it. John C laid the rest of the damp proof course on the internal walls. 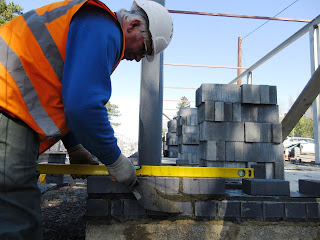 before making a start on the first course of bricks above the DPC on the southern gable end. 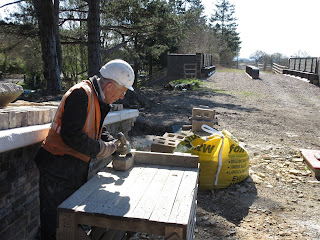 As can be seen in the background half of the ramps on both platform 1 & 2 had been dismantled recently especially to give Robin back his reason d'etre, which is cleaning bricks (and making a very good job of). There too not many to do so his return to duty will not last that long. Re-building will probably start when the bricks are available from the cleaners. 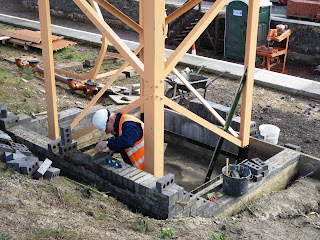 Clive, meanwhile, has been given the job of building the retaining walls around the footbridge towers on platform 2 to prevent the soil from subsiding into void. This has been in progress for a few weeks and is now nearing completion with the final course of bricks being laid along the back wall. 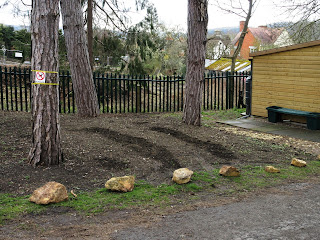 Vic's good work in turning, raking and seeding the soil by the bric-a-brac shed has been undone by some thoughtless individual parking a car on there recently, hence the row of stones which Vic carefully placed along the edge today to try to prevent a recurrence. 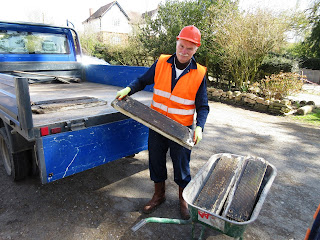 Buildings & Services dept kindly delivered a few step treads which had recently been found at Winchcombe. Should have enough to complete the signal box steps now. Thanks guys. 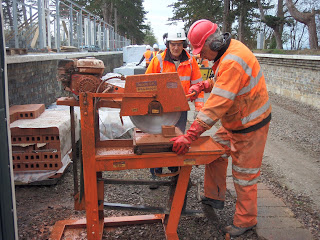 Jo and Keith taking turns to operate the brick saw. Bricks can be cut in half using a bolster and lump hammer but this method gives a much better finish. There are going to an awful lot of bricks to cut before the station building is finished, some will need cutting twice, so keep up the good work guys.