Today was a very important day for the Broadway group of the GWSR, a lot of people with a shared interest in returning Steam to Broadway gathered at the station. This included many of the directors of the railway, our President, Pete Waterman OBE, local leading councillors, members of the media, the railway media and twenty eight Broadway volunteers.
The purpose of the gathering was the launch of GWSR's share issue "The Last Mile". This share issue is for the purpose of finishing off the last mile of track and the Station buildings to bring steam trains back to Broadway. Full information on this share issue and it's benefits can be found by following the link to the main GWSR website, or follow the link top right on this page. Please help us if you can, you can claim a 30% tax refund for shares purchased.

Some updates from earlier in the week. On Monday a group of volunteers were on site to help with the preparations for lifting the centre span of the footbridge. This included unloading the smoke deflectors arriving from the manufacturor in readiness for fixing before the lift. When the crane had arrived and set up the roof support hoops for the two towers were lifted into position and bolted into place by the contractors. Some preparatory work for the share issue launch was also done. 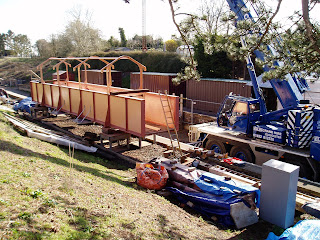 On Tuesday volunteers were again on site to assist the contractors during the lifting of the footbridge and also to see a sight we shall only see once.
You can see the crane is already set up and the two smoke deflector have been bolted in to place. Weighing 140 kgs each it took a few of us to hold them up whist they were bolted on to the span. Two props have been fitted to give extra support to the sides of the span whilst lifting and two spreaders to keep the lifting chains and strops clear of the hoops are resting on the side panels. 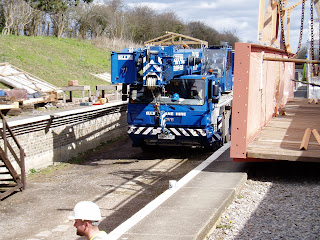 The lift actually consisted of three lifts, because of the position where the span had been renovated and the distance it had to be moved. It was also complicated by the Corsican pines, an overhead power cable and our containers. In the view left the first lift has taken place, you can see the stools that the span had rested on on platform 2. The span is on platform 1 having cleared two containers and the crane is almost ready to move into position for the next lift. 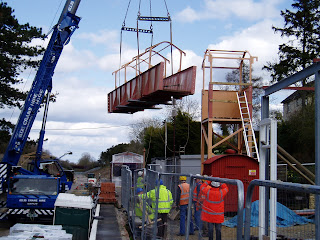 The span is now being lifted for it's final positioning, you can see how the spreaders are keeping the strops clear of the upper steelwork. According to the crane driver, who by the way was inch perfect, the total weight was around 11.5 tons. The span has already cleared the CCTV mast and the main power cable that feeds our cabins. This cable crosses the trackbed on a catenary wire between where the crane is situated and where the span is going. 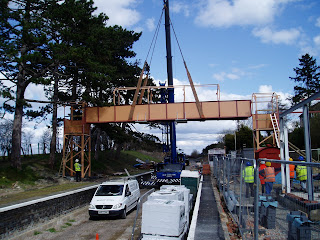 Slowly the span inches into position guided by one of the contractors. The first time the original span meets it's new towers. Lots of breath held and fingers crossed. 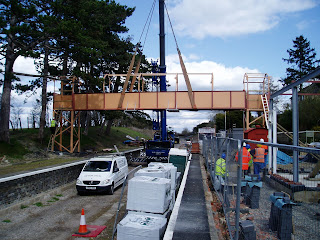 It fits. Hurrah, and the crane easily holds it in place whilst the contractors start the process of inserting all the fixing bolts which will hold the whole structure together. Well done lads. 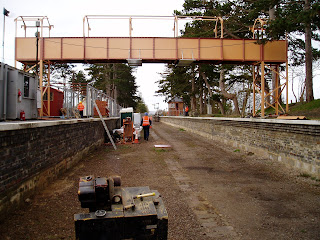 So on to Wednesday, cool and with a wind which would have probably stopped yesterday's lift. An early morning view of the footbridge and with the crane gone on to it's next job. Volunteers are setting off on various jobs to get ready for our visitors later in the morning. In the foreground the roller is on it's way to roll some filled in ruts unavoidably left by the crane on it's exit, right where our guests have to walk. 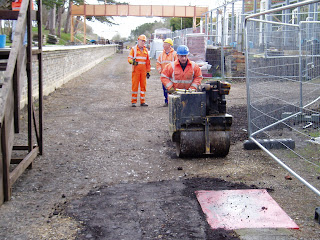 Steve with the roller levelling off some of the filling dumpered from the stockpile earlier.
Gordon and Tony making sure he's doing it right whilst waiting to greet the guests. 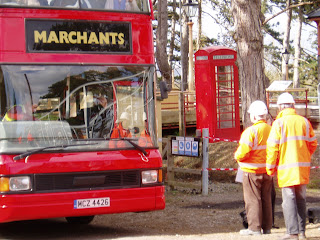 Our guests, accompanied by GWSR directors arrived on a double decker bus from Toddington.
They were greeted at the site entrance and escorted in towards the signal box. 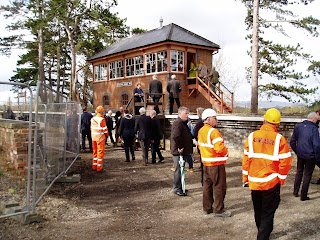 Volunteers were ready to answer any questions and to ensure our guests safety. The guests were given time to look in the signal box, where volunteers also answered any questions. 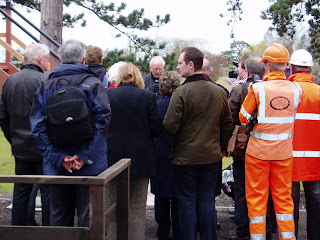 After our chairman Alan Bielby opened proceedings Chris Bristow, finance director, spoke of the railways recent history as a background to the launch of the share issue and succinctly outlined the purpose and benefits of purchasing shares.

Our president Pete Waterman is seen during his speech of support for the share issue to the gathered guests and volunteers. 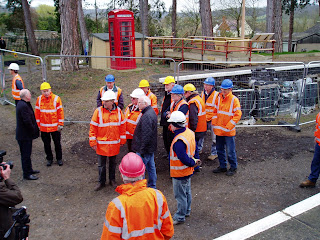 Following his speech Pete had a more informal chat with Broadway group chairman Roger Brindley, construction manager John Crawford and other volunteers. A nice down to earth gentleman who has done so much for our railway.
Our guests all left around midday and we all got back to work. 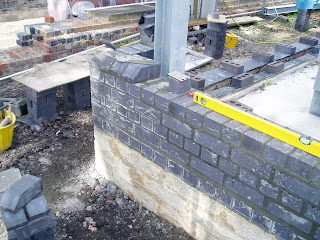 The bricklaying continued on the station wall and particularly this corner which has reached the plinth headers where the wall reduces in thickness and continues upwards using weathered red bricks.

More work on the security fencing down the main drive saw it almost finished.

There was also work done on the retaining wall at the base of the footbridge tower on platform two. 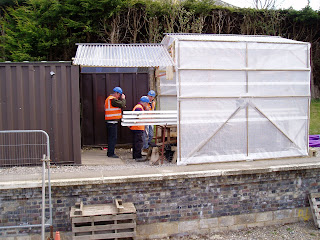 Dave our resident camera guru has got the camera for the blog relocated onto the footbridge so that you can still see the staion building, This time from the platform side.

In the carpenter's shelter the fascia boards for the footbridge are being prepared. They have had a angle cut on one edge to meet the angle of the roof sheets. Then they have had any knots treated and a coat of primer. When fixed they will have the dagger boards and guttering fixed to them. The bridge will have to be scaffolded to carry out this work and the roofing 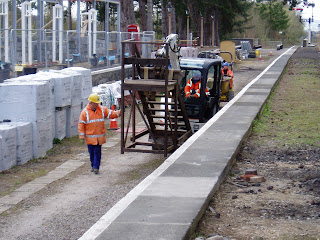 Finally a lot of clearing up after the share launch was carried out. Heras fencing was removed so we have free access through the site.
Here John C in the mini digger, guided by Tony is returning the steps, used by the guests to access the signal box, to their normal position of giving access from the trackbed to our containers.
Behind is Steve with a dumper load of cut timber from the tree clearance in the car park.