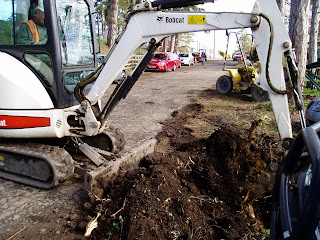 Monday's update, five volunteers achieved a lot during the day. A start was made on laying the damp course onto the courses of bricks previously laid, both external and internal. This involved cutting it to size and bedding it on a fairly thick bed of mortar. Another big job achieved was the cutting of the bricks, blues, reds and detail bricks that will be used for getting the bonding correct and for the window and door detail. This dirty and strenuous task was carried out by Jo on the rented brick cutter.

Today 25 volunteers signed in for duty on what turned out to be a lovely bright day after a cold start.
The first picture is JC and the digger removing some tree roots from the ground alongside the main drive. It is hoped, when it is landscaped, to use it for a picnic area. For now it is a case of keeping the area tidy and improving the look of the station entrance. Later on in the day the removed roots were dumpered away for burning. Terry and Rod then cleared the side of the drive and the soil was levelled and raked. 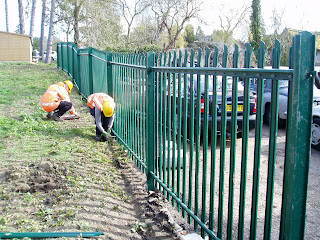 At the other side of this piece of land Dave, Vic, Terry and Rod carried on with the security fencing between the railway land and the local garage. Here Vic is tightening up the fixing bolts whose nuts shear off when tight enough. At the top of the picture is the "Goods Shed" manned, or should it be personed, by Julie our ace salesperson, raising funds for us. 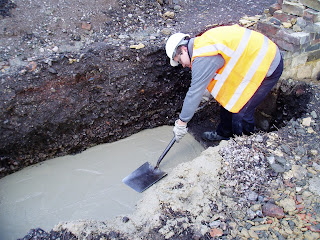 At the end of platform 2, Peter S finishing off the re-made footings for the ramp. You can just make out the end of the platform top right of the picture 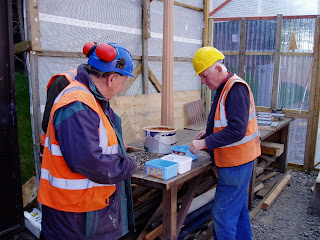 Further up the site at our carpenters work place Peter Q, Brian and Dave spent a joyous time sorting through the hundreds of spare screws, etc, which always seem to end up in the same box when returned from the job. 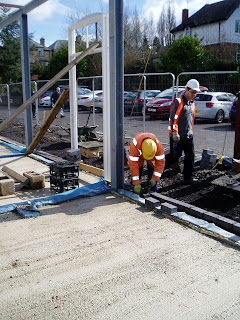 On the station building, work carried on apace. After the booking office door frame was positioned Tony is finishing the courses up to damp course. This door will be the only one on the drive side of the building and will be the main entrance to the station 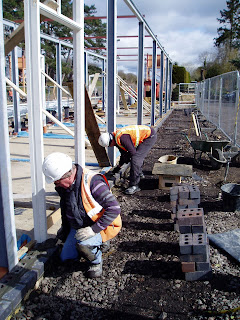 Bob W laying the last of the first course, if that makes sense, and Paul is filling the holes in the bricks to leave a solid base for the damp course. 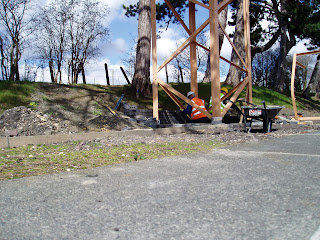 Clive and Roger finishing off the retaining wall around the footbridge tower, stepping the wall down to match the slope. To the right of the tower is the roof support hoop waiting to be lifted into place next week before the main span which is also to be put in position. 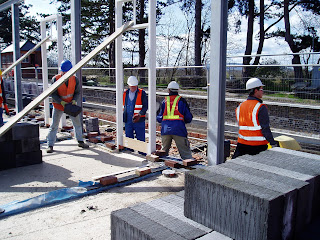 The last few pictures show a bit of Broadway teamwork. The task was to move the blocks for the internal walls, which had been stored down on the track bed, up into the station building ready for laying. 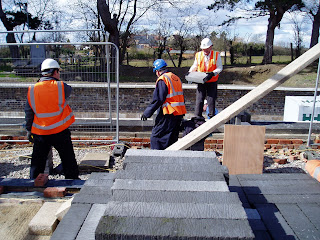 The answer a human, well in most cases, chain. A bit of to me, to you and don't stop or you end up with a block in the ear. JC and Dave below pass up to Paul, Brian and Peter  then on to Ron and John S in the picture above. 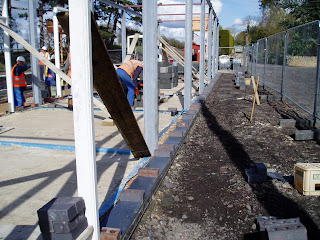 While the block moving continues in the background, this photo shows the drive side of station wall with the damp course bedded. As soon as the building inspector signs this off the brickies can really crack on. 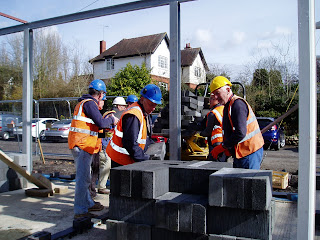 The afternoon finished off with more of the same except we loaded the dumper with blocks from the track bed, drove them round to main drive to stock up the other side of the building. 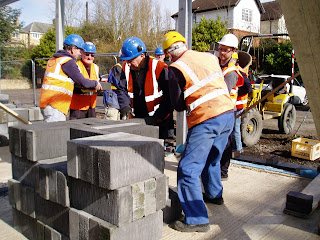 There was also some painting finished off and some general tidying up taking place, in readiness for next week's The Last Mile share issue official launch. Another good day with a fine bunch of blokes and a blokess.