After the success and enjoyment of the "Broadway - The Last Mile" share launch on Wednesday work returned to normal for the 13 volunteers who came along to pick up the threads from where they left off last Saturday.

Although this particular thread was probably not thought of last week it soon shot to the top of the priority list, that is, making sure that there was an ample supply of share brochures readily available at the Broadway site. 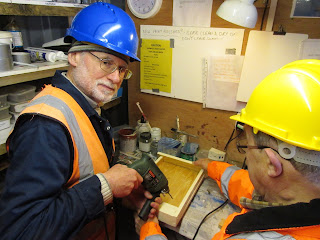 To facilitate this John B and Stuart were busily engaged in the modification of a suitable receptacle which would serve as a share brochure dispenser. 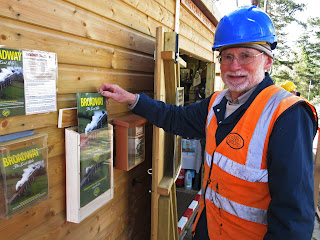 Undoubtedly worth its weight in gold, the dispenser in revenue earning service attached to the outside of the bric-a-brac shed with a particularly pleased John B showing how well it works. We sincerely hope that lots of you will come and try it out. 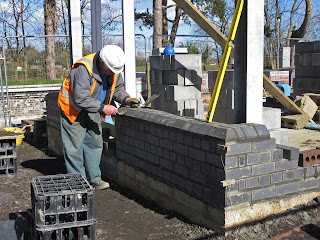 The fine weather during the morning allowed bricklaying to continue on the station building. John C is seen pointing the plinth headers topping off the five courses of engineering blues on the south gable end. It looks impressive and so it is, hopefully the north gable and front and rear walls will soon catch up. Unfortunately rain just after midday curtailed the progress made during the morning. 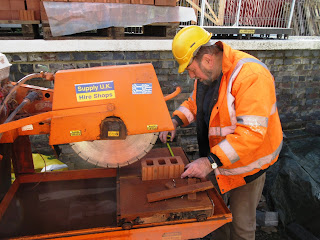 The hire of a brick saw has certainly speeded things up enabling queen closures (can be described as bricks cut in half end to end) and snap headers (bricks cut in half side to side) to be cut to size without the damage that would accompany the hammer and chisel method. Peter K checking that the settings left from the previous operator are still accurate enough before todays production. 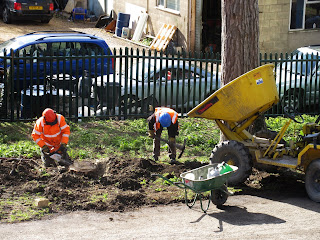 Roger and Stevie B spent the day continuing the tidying up of the drive and car park area, some piles of wood left over from the winter clearance had needed to be cut into more manageable sizes. 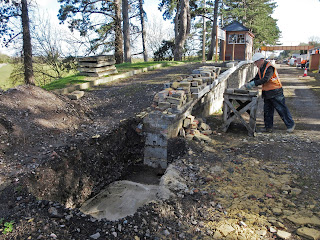 Not to be forgotten was our ever enthusiastic Robin once again spending the day cleaning bricks but only after an hour or two spent on the cement mixer before relief in the shape of the slightly less life experienced Peter S. 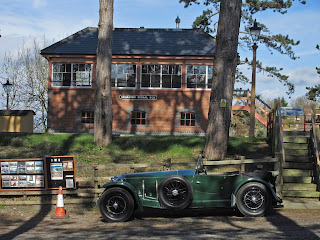 Today seemed to be a good day for unexpected visits of classic cars and this one might be described as more classic than most. Our resident classic cars expert Tony B has identified it as 4.6ltr Invicta tourer built in 1931 which gives a most agreeable exhaust sound when pulling away, doesn't quite match a Castle class loco climbing up Camden bank of course but in its own way....

In and around the footbridge. 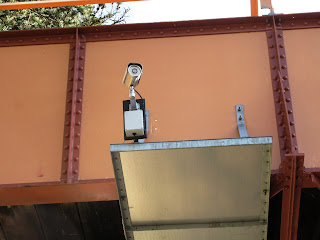 The security camera bird is now perched on the smoke shield positioned over the up (northbound) line. Dave H has spent much time training this device to behave itself.


To finish; a couple views of, and from, the newly installed footbridge walkway 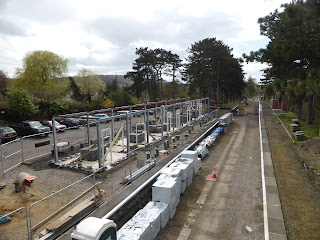 From the top of the tower looking in a south easterly direction and, below, as it looked after the crane had departed on Wednesday. 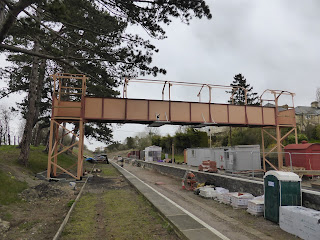