The 15 of us on site today gravitated towards the two main centres of activity, footbridge and station building, although the other tasks carried out are just as important if not quite so glamorous.

Those involved with the station building started the day with a quick scrum down to decide if the weather forecast could be relied upon. After concluding that the promise was probably correct and rain was not likely before 12 noon they went off to get set up.

Meanwhile the footbridge crew were able to crack on immediately with Dave and Pete leading the way...... 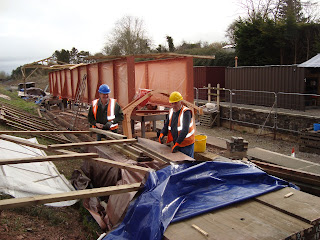 ......by uncovering the footboards from the Henley in Arden bridge that had been carefully preserved for future use. The remains of the footbridge "tent" are evident in this view, this has been carefully dismantled so that it can have another life in a couple of months time. 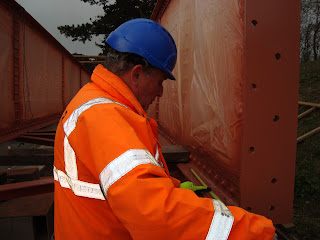 So the job for today was to position the footboards in the correct place on the main span, Jim is carefully measuring the spacing so that the board can be placed without disturbing the new paint (there are 12 of them in a foot Jim!). 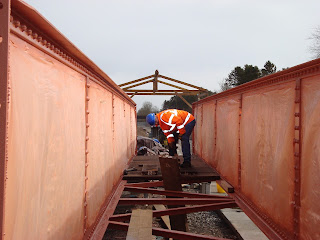 The careful preparation by Jim and his crew during the footbridge's dismantling certainly paid off when today's gang started to put it back together. Roger is meticulously removing any crud that had hitched a ride on the footboards, necessary because the paint is still a bit green and so easy to damage when placing these boards (there were various comments today about a plank but this was probably referring to the Eric Sykes film.) 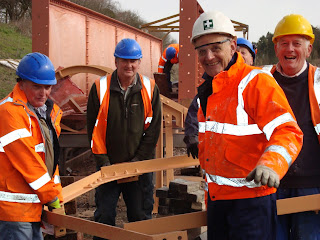 A photo that's just impossible to leave out, Jim, Dave, Keith, Brian (just) and Pete responding to an innocent enquiry from the photographer about how many men it takes to a move a roof support hoop. The snapper had previously worked in an industrial environment so was fully conversant with the words used. 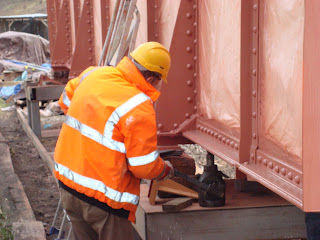 Peter K had earlier taken the trouble shoot off home to pick up his bottle jack to help with proceedings. Contrary to appearances we are not lifting the bridge into position an inch at a time, no, some vital pieces of timber had, for some reason, been used as packing pieces to support the bridge so their extraction was needed to allow the process to continue. Well done Pete!

Now for the other areas where work took place. Mike resumed the painting of the window frames for the station, this is now the second coat of primer. 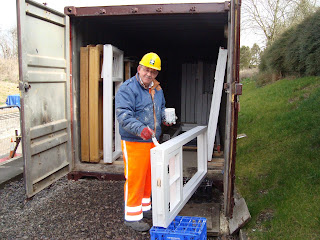 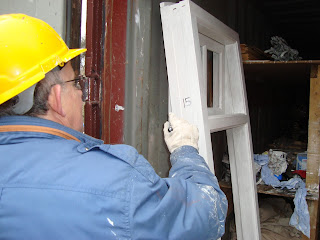 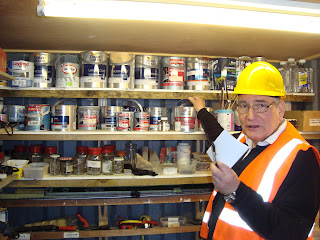 Keith G planned his day so that he could spend the morning, which was expected to be rain free, attacking the scrub with the brush cutter and the afternoon in the container carrying out his duties as COSHH advisor. 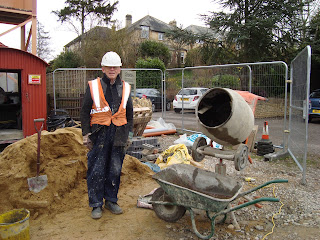 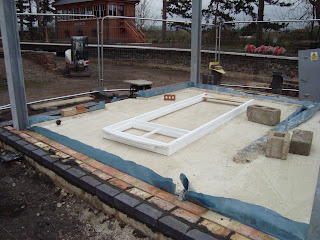 But not before the weather had decided to throw a spanner in the works by blowing down the doorframe which we had diligently placed in the exit from the kitchen area as recently as Wednesday last week. We decided to leave it lying there as even stronger winds are expected on Easter Monday. In the foreground are the blue facing bricks laid today and the commons backing up. 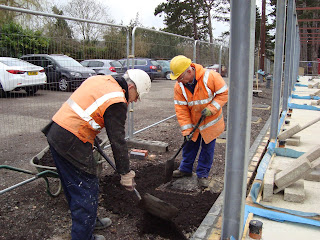 The brickies finished the day by spreading some infill around the recently laid manhole covers to remove a potential trip hazard and improve the appearance of the building, as below........ 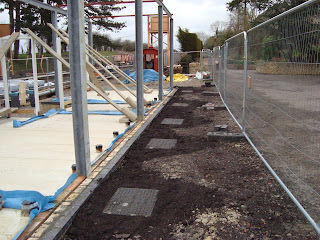 A good day where much more progress was made than was anticipated at 8 o'clock in the morning.

A reminder that the share issue Broadway - The Last Mile is now open. Will you help us get to Broadway?