A cold and wet morning first thing eventually turn out to be a fine spring day,  to which we had 24 volunteers turn out to do a mixed bag of jobs around the site.

The previous Monday had seen the laying of the Station building floors, here is the view from the south side the only room not to be finished was the gents on the north end. 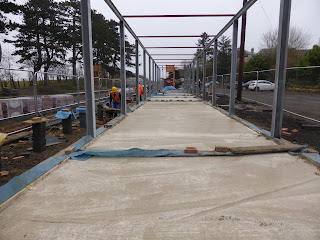 This was soon to be rectified by the arrival of the mixer with 3.7 tons of concrete, all hands to the shovels and rakes.

The left over concrete was used to fill the footing previously dug at the end of platform 2 south, here are two pictures, one showing the mix being poured watched by Paul and the finished foundations that were laid the previous Saturday on platform 1. 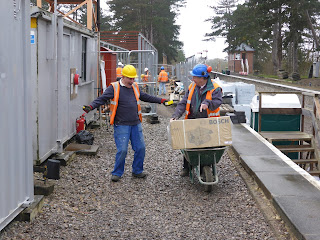 You can see the by the look on Pete's face that it could be Christmas, it was the delivery of a bench saw a much needed piece of equipment that over the next couple of years will be extremely useful .
As with most men it was soon set up then heads were scratched with what to do with the various bits and pieces (then we read the manual!)
First job was to cut the fascia boards for the footbridge, these 4 metre plus planks of wood needed a 28 degree angled edging put the top edge. Below is the finished product, the new saw did us proud as there were 7 planks to be shaped.

Graham and Mike gave the signal box stairs a rub down then applied a second coat of undercoat, whilst it was drying the stair treads where also given a fresh coat of paint. Graham with Mike's help then painted the platform edging. The second picture shows the finished platform. 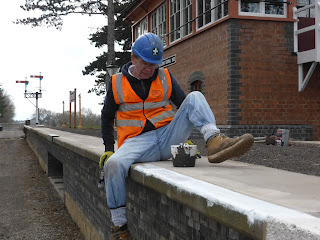 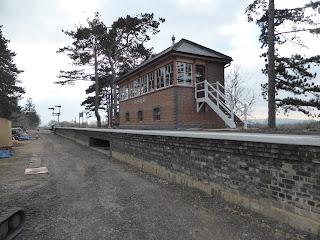 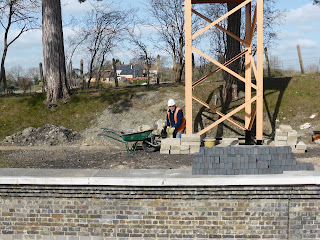 Clive having finished with helping concrete the final room on the station carried on blocking around the footbridge tower on platform 2. 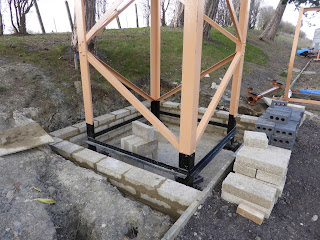 This will eventually form the retaining wall as the bank behind the tower is a metre or so higher at this point. Here is what Clive achieved by the end of the day.


Also a large group went north! to carry on the clearance of the banks. A brush cutter in use soon cleared large areas which was the carried straight to the ever waiting bonfire. 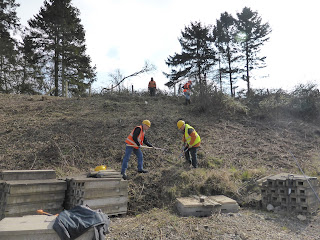 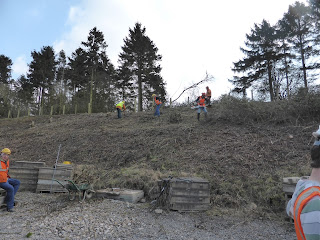 Various other volunteers around the site were doing odd jobs both big and small, including Julie at the shop, Vic and Ray clearing vegetation and sowing grass seed adjacent to the shop & Gordon and John inspecting the drainage north of the station. Everybody making it a excellent day all round.

Posted by David Holdsworth at 11:42